Hundreds of Flights Cancelled as Beijing Lashed by Torrential Rain 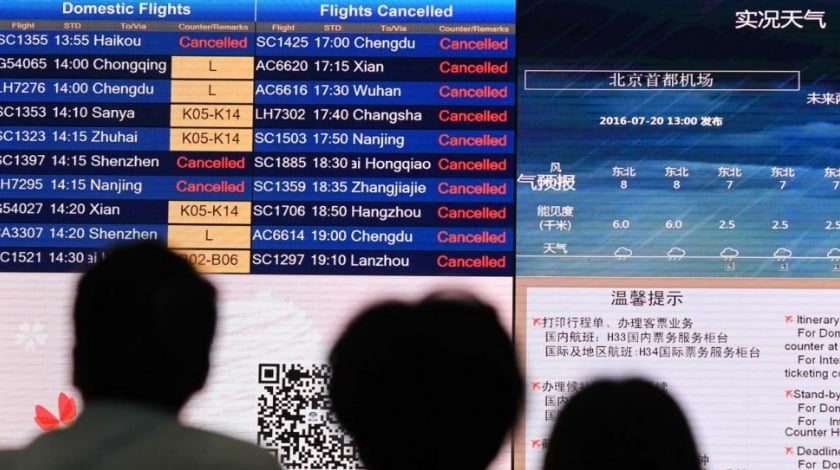 Alerts issued in capital as the authorities warn it could see the most serious flooding since 79 were killed in storms four years ago.

Thunderstorms and heavy rain have led to hundreds of flight cancellations and delays at airports in Beijing and neighbouring Tianjin.

Beijing’s weather bureau said the rain could cause the most serious flooding in the capital since 79 people died in storms in 2012.

Beijing airport issued an alert earlier that strong rainfall would continue from early morning to about 3pm and there would be showers until 10pm.

The airport authorities asked passengers to keep a close eye on flight information and the weather forecast.

Binhai Airport also warned that the weather would continue to affect flights.

The torrential rain has also hit areas neighbouring the two cities and was the heaviest since the start of the summer, meteorologists said.

The high-speed railway service from Beijing to Tianjin has been suspended due to the heavy downpours. More than 20 other railway lines from Beijing to southern cities have also been affected.

Beijing updated its alert for torrential rain from yellow to orange at 11.30 am on Wednesday, the second highest on a four-tier alert system.

The capital’s Fangshan district in the southwest suburbs issued a red alert for flooding.

The rain is forecast to last until Thursday.

Beijing’s meteorological bureau said the downpours could be heavier than floods on July 21, 2012 when 79 people were killed and at least 8,200 homes were destroyed.

Beijing’s Mayor Wang Anshun vowed at a flood control meeting on Tuesday night to “learn the lesson of July 21 flood”.

He urged the city to prepare to ensure there were no fatalities.

Some roads in western part of the city were reported to be waterlogged.

Hebei upgraded its torrential rain alert to red on Wednesday morning and the authorities are closely watching water levels in the province’s rivers.