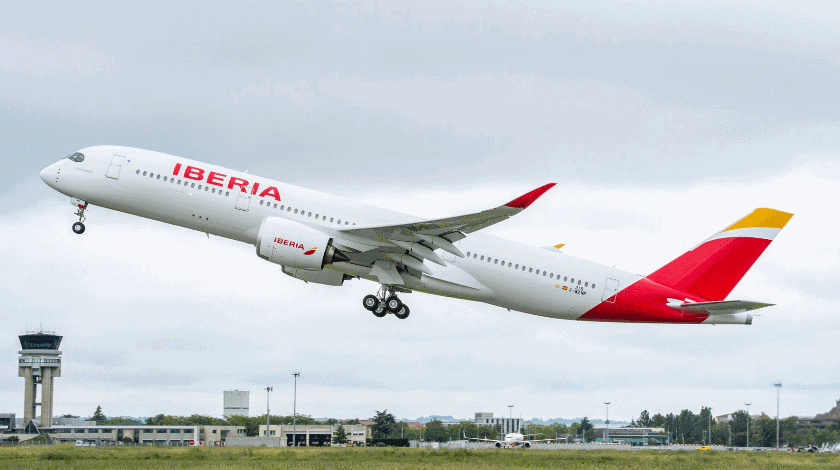 Iberia, Spain’s flag carrier and a founding member of the IAG’s group of airlines, has taken delivery of its first of 16 A350 XWB on order, becoming the 18th airline to operate the world’s newest and most efficient twin-engine widebody.

The aircraft is the first A350-900 to feature the latest performance improvement package including a wing twist, extended winglets and increased maximum takeoff weight capability, delivering unrivalled performance across Iberia’s network. The aircraft is configured in a premium three-class layout, with 348 seats, including 31 full lie-flat bed Business, 24 Premium Economy and 293 Economy seats.

“We are delighted to receive our first A350, an aircraft that represents perfectly the efficiency and modernity of the new Iberia, as well as the power and energy that brought us here,” said Luis Gallego, President of Iberia.

“If during these last years we transformed ourselves to survive, now we are transforming ourselves for excellence, a cycle change that this new aircraft represents so well.”

“We are tremendously proud of Airbus’ long standing relationship with Iberia and to be delivering its first A350-900,” said Tom Enders, Airbus CEO. “Iberia was a founding member airline of IAG, a group that with this delivery successfully operates every member of our commercial aircraft family, from the A318 to the largest A380 and now the most modern A350. Congratulations to the teams of Iberia and IAG.”

The A350-900 will join Iberia’s all-Airbus fleet comprising more than 100 aircraft (including Iberia Express), allowing them to leverage the full benefit of Airbus’ unique aircraft family commonality.

In order to reduce its carbon footprint, the A350 XWB delivery flight from Toulouse to Madrid is fuelled with a blend of sustainable jet fuel.