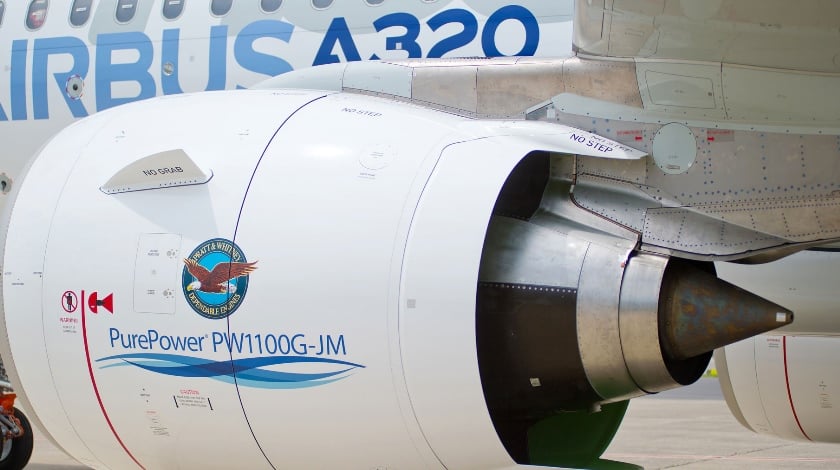 Part of their investigation will involve the inspection of sixteen A320neo aircraft in IndiGo’s fleet and five in GoAir’s, reports The Times of India. The inspection is due to take two weeks to complete.

“Airlines have been asked to carry out one-time boroscopic inspection of all engines which have completed 1,000 hours instead of 1,500 hours recommended by manufacturer and repeat inspection at every 500 hours,” a DGCA official is reported as saying. They have also directed airlines to not fly affected aircraft if metal chips are detected in the engine oil, although manufacturer instructions say aircraft can be flown for ten hours after detection.

The Business Standard reports that there are two separate issues with the PW1100G powerplants: one in the combustion chamber and the other with the one of the bearings. There have been six incidents with Indian A320 neos fitted with P&W engines over the last month, mostly to do with the detection of metal chips.

IndiGo spokesman Ajay Jasra has said that the engines are meeting their efficiency expectations. “Though we continue to face a few operational issues with the Neo engine, both Pratt & Whitney and Airbus Industrie are working to address these issues,” he said. “And, in the meantime, we continue to receive the necessary operational and technical support including the provision of spare engines to help mitigate the operational impact on us.”

The problems with the P&W powerplants have been widely reported. In late 2016, Qatar cancelled the acceptance of four early-build A320neo citing performance-related issues with the engines. Speaking at the Singapore Air Show, Qatar Airways (QR, Doha Hamad Int’l) Chief Executive Akbar Al Baker said that there were “huge issues” with the engine.

“The issues are still under review, so it would be premature to speculate on the cause,” P&W spokesperson Sara Banda told Times of India in a statement. “We are working closely with our customers and our suppliers in order to address and resolve these issues quickly.”