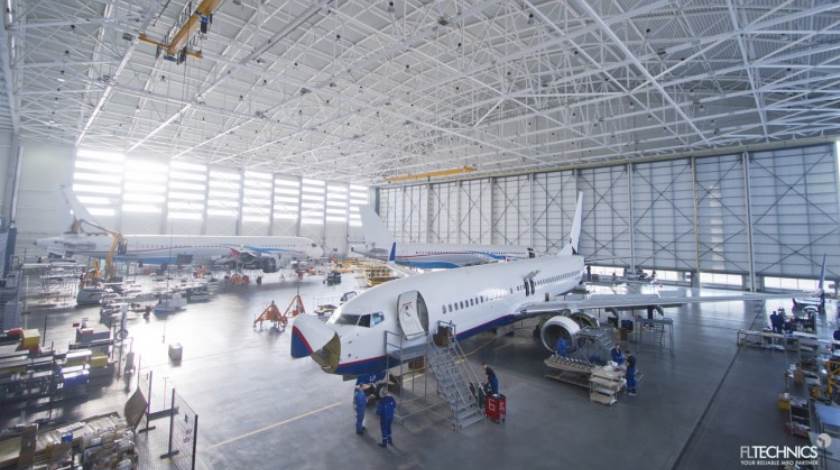 Indonesia only has one internationally certified MRO provider, even though the country is the largest airline market in Southeast Asia.

The country had 58.9 million domestic and 13.7 million international passengers last year, representing year-on-year growth of 6% and 5%, respectively, according to Indonesia’s central bureau of statistics. The Aviation Week Intelligence Network (AWIN) database shows that the country’s top 10 commercial airlines have a total fleet of 455 aircraft (see graph below). There are also a large number of aircraft on order for Indonesian airlines, such as 306 Boeing 737s and 269 Airbus A320-family aircraft, according to AWIN data.

Garuda Indonesia’s MRO company, GMF AeroAsia, is the only airframe and engine-overhaul facility in Indonesia with European Aviation Saftey Agency (EASA) and FAA certification. The company established its own Part 147-approved training organization in 2009.

Richard Budihadianto, president director of GMF AeroAsia, says many Indonesian carriers send their aircraft and engines overseas—to places such as Singapore and Malaysia—to be overhauled. But that is more expensive and is a lost opportunity for Indonesia in terms of jobs and work.

There are 60-70 aviation MRO companies in Indonesia, says Budihadianto, who is also chairman of the Indonesia Aircraft Maintenance Services Association (Iamsa), which represents about half of the country’s MRO providers. Many of these cater to the business aviation and general aviation sector.

Iamsa has been encouraging MRO companies in Indonesia to apply for EASA and FAA certification, because it can see that in the future more customers will insist on this, says Budihadianto.

But most MRO companies in Indonesia have failed to act because they are very focused on the domestic market and their customers are happy enough with Indonesian Directorate General of Civil Aviation (DGCA) certification, he says.

Sriwijaya Air and other Indonesian carriers can turn to only one in-country airframe and engine MRO provider. Sriwijaya operates 46 aircraft, such as this Boeing 737. Credit: Wikimedia Commons/Dmitry Pichugin

However, there are many leased aircraft in Indonesia, and foreign leasing companies generally want their aircraft maintained at FAA- or EASA-certified MRO companies to retain the highest residual value of their assets.

A stumbling block to EASA and FAA certification is that it costs money. “In Indonesia not many of the MRO companies are big enough to cover the cost of the audit. For big MRO companies, spending $50,000 on an audit is all right. But for some MRO companies that it is a very big amount,” says Budihadianto.

There is also the issue—particularly in the case of the FAA—of whether the agencies would actually be willing to come to Indonesia and audit a new MRO provider. In recent years it has been hard for MRO companies outside the U.S. that are not already FAA-certified to receive FAA approval. Some have attributed this to U.S. protectionism and caving in to U.S. unions, while others have said the FAA may be unable to certify more overseas MRO companies because of funding constraints. For a few years, the U.S. Congress also banned the FAA from issuing new foreign repair station certifications due to security rules.

Budihadianto says FAA certification is hard to get. He says if the FAA approves an overseas MRO provider then it is responsible for oversight of that company, which means more work and costs for the FAA.

Another impediment faced by Indonesian MRO providers is inadequate airport security. Regulators require MRO companies to be located at an airport with adequate security and where unauthorized personnel have no access to the runways. But there are airports in Indonesia where, for example, the runways and taxiways need to be improved and new perimeter fencing needs to be built.

“Airport infrastructure development is on the government’s agenda. They have decided to build new airports and improve old airports to meet international standards,” says Budihadianto. But he adds: “We have around 300 airports in Indonesia already and with a limited budget, the authorities have to prioritize which ones to develop and improve.”

He thinks the government should work with the private sector to develop airport infrastructure through public-private partnerships. In some countries, such as India, private companies have paid for new airports with the stipulation that they will operate the airport for 30 years, after which it will be returned to the government. All of Indonesia’s major airports, with the exception of Batam’s, are controlled by state-owned Angkasa Pura I and II.

GMF AeroAsia is based at Indonesia’s main international gateway, Jakarta’s Soekarno-Hatta International Airport. Aviation Week spoke to Budihadianto in his office beside GMF’s fourth hangar, which has just been built and can accommodate 15 narrowbodies simultaneously.

The hangar was constructed relatively quickly. Indonesia has no shortage of building laborers or materials, but obtaining approvals from the authorities to build the hangar took a long time.

Rather than rely solely on its Jakarta base, GMF AeroAsia is working with Singapore-based Gallant Venture, which has a concession to build an airport on Indonesia’s Bintan Island, a short ferry ride from Singapore.

Budihadianto says the airport on Bintan is due to open in 2017, and GMF AeroAsia plans to build a hangar there. It chose Bintan because it is near Singapore, and the developer offered GMF AeroAsia plenty of suitable land.

Many OEMs, such as GE and Pratt & Whitney, have component repair shops in Singapore. Specialized components often have to be sent to the OEM for repair, so it is easier if the MRO facility is located near the OEM’s.

GMF AeroAsia could have chosen to build its hangar on Batam Island, which has an airport and is also a short ferry ride from Singapore. But Budihadianto says the Batam authorities were unable to provide enough land.

One issue GMF AeroAsia will confront with its new MRO facility on Bintan Island is finding enough maintenance engineers and technicians to staff the facility. Boeing has forecast that Southeast Asia will need 60,000 new technicians over the next 20 years.

Budihadianto says GMF AeroAsia already has started recruiting and training people from Bintan for these positions. It takes a long time to complete training, and the plan is for these technicians to start work at GMF AeroAsia in Jakarta. When the facility opens in Bintan, they will be transferred there, he says.

“New training colleges have been established in Indonesia, but not as many as we would have hoped. The growth in capacity of the schools, such as state-owned Sekolah Tinggi Penerbangan Indonesia (STPI) in Curug, is very limited. This has created an opportunity for new schools, but we still can’t get enough. So we set up our own training organization, which was approved in 2009,” says Budihadianto.

“GMF now has the largest training organization in Indonesia for engineers and technicians. But we discovered that we can’t continue to do it on our own,” he notes. “We can continue to train technicians, but not licensed maintenance engineers, because that takes a lot of time. In 2012, we decided to try to shift activity to educational institutions that we would then help to turn into DGCA-approved schools.”

Budihadianto says they are working with seven polytechnics and two universities. “We’re working with them to help them get approval as a Part 147 training organization. Our aim is to get the first school approved in the next two years,” he says, adding they are already training the course lecturers so they can be qualified as licensed maintenance engineers.

Budihadianto says one of Indonesia’s edges is its large, young population. “This is our advantage and strength right now. Indonesians aspire to work as maintenance technicians. If you look at our population over the next 10 years, you can see that more than 50-60% will be productive young people. These young people will need jobs.”

Another challenge Indonesia’s MRO sector faces is retaining its skilled personnel. Once Indonesians gain an internationally recognized qualification, some go overseas, where the pay is higher.

Budihadianto notes that Indonesian-licensed engineers who leave tend to go to the Middle East but eventually return. “Indonesian people generally don’t like to stay abroad. They go overseas to work because they have to,” he says. “For example, maybe they need to earn more money to pay for their children’s university education. But once that is completed, they come back.”

He also says having many Indonesians working in the airline industry overseas does have its advantages. “We stay in contact with them, and they help us to find out about projects that we can bid on,” he says. The markets that GMF AeroAsia is targeting mostly are for third-party MRO work in the Middle East and India, he adds.