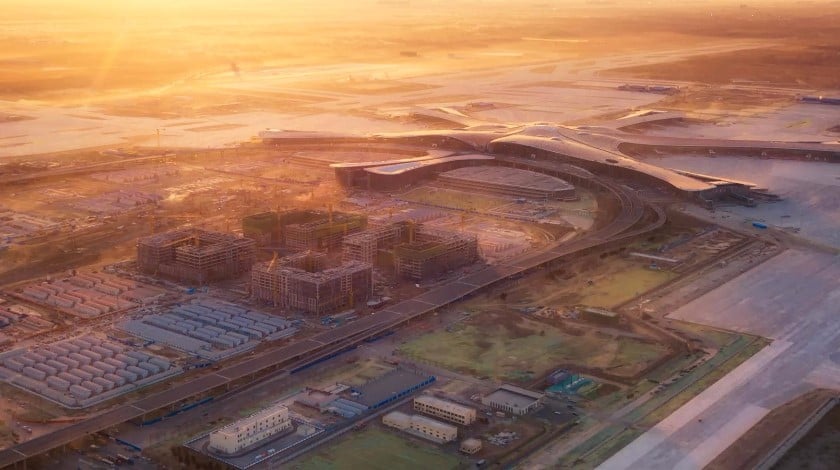 No surprise that the country’s capital, Beijing, is already struggling to serve the travellers. As one of the major issues appears to be airports’ capacity, especially Capital International Airport’s which is already exceeding its limits.

Nevertheless, the solution is underway. This is where the new airport, second global gateway, comes in: Beijing Daxing International Airport.

It was December 2014 when the first construction works saw the light of day. After almost five years of massive construction, China has given a shape to the 700,000m2 terminal with four runways. According to Daily Mail, there are eight runways planned in total to meet the growing demand for air travel in/to/from China.

The airport is scheduled to complete on 30 June and open on 30 September 2019. Total cost of the new hub is expected to reach $13.1 billion in total.

Not to lessen the power of impression, when it is fully built, the airport will have eight runways and 268 parking bays, which will be able to accommodate 620,000 flights per year.

According to China Central Television Station, it took for the test aircraft 42 minutes to complete the flight from Beijing Capital Airport to the brand new Beijing Daxing Airport.

Particularly this flight set the beginning for the flight inspection process which is due to finish in the middle of March 2019.

Flight inspection is an obligatory testing for all the new airports before opening their gates for service. During this procedure the technical specifications and general information about the airport’s devices used for communication, navigation, monitoring, etc., are being checked, assessed and adjusted.

Also, the quality of runways and air-control facilities are examined. After the inspection of all devices is complete, they will be ready to be put into operation.