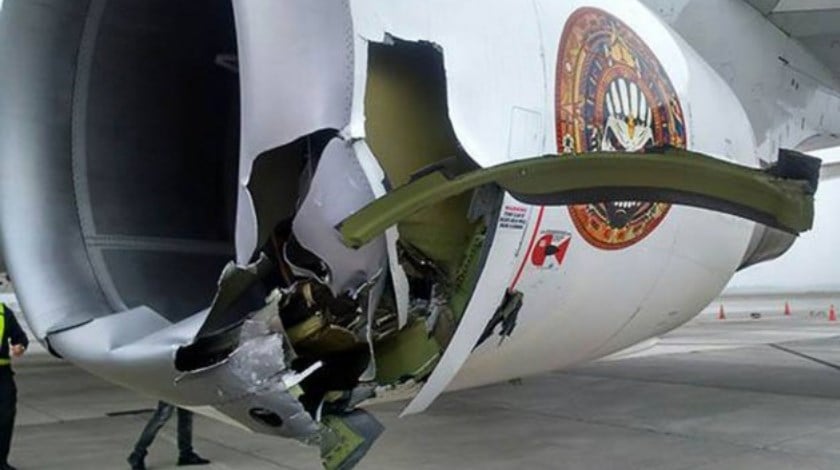 Iron Maiden’s Ed Force One plane has been badly damaged in an airport collision while still on the ground – just weeks after leaving Cardiff to carry the band on their world tour.

Frontman Bruce Dickinson, who as well as being a world-famous musician is the chairman and co-founder of Cardiff Aviation and a qualified pilot, was at the controls as the plane left Cardiff Airport to fly to Fort Lauderdale on February 19 ahead of the band’s Book of Souls tour.

But on Saturday the band tweeted a picture of the 747’s torn fuselage as it sat on the ground at Santiago Airport in Chile. Two people were injured in the collision, which occurred when the plane was tethered to a tow truck prior to refuelling. A steering pin is believed to have fallen out and left the jet out of control on the Tarmac. The aircraft smashed into the ground tug, which tore into the plane’s undercarriage.

Ed Force One is the metal band’s own chartered airplane which they first used in 2008 and takes the band around the globe on world tours.

The band has said it still plans to perform shows in Cordoba and Buenos Aires as scheduled. A statement said: We are currently making contingency arrangements to get to the show in Cordoba tomorrow with band, crew and equipment intact.

“Although this is tragic for our beautiful plane we do not expect this to affect our concert schedule including the next two shows in Cordoba and Buenos Aires. We hope to find a new Ed Force One to continue this adventure with us in the near future.”

The band is currently at the start of their massive Books of Souls Tour and played in Santiago on Friday night and are due to play in Cordoba on Sunday. The 70-date tour will take them across four continents between February 24 and August 4 covering a total of 55,000 miles.

Although already a qualified pilot Dickinson had to obtain a new licence to fly the 747 and it was his maiden trip when the band left Cardiff to travel to the United States before the tour began.

The plane has the band’s tour dates etched onto its fuselage and has a distinctive livery in the band’s iconic branding on its tail.