Is Chinese C919 Strong Enough To Be Internationally Acknowledged? 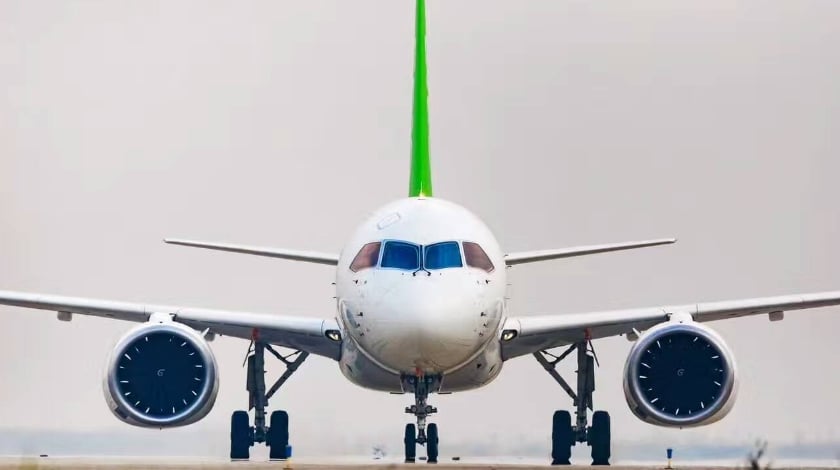 By introducing the C919 airliner to the public during its maiden flight on 5th May China made a brave step into the niche market of medium-haul aircraft. However, experts say that even despite possible dumping it will be difficult to compete with Boeing and Airbus.

The C919 developed by Commercial Aircraft Corp. of China (COMAC) became the first passenger airliner manufactured in China since 1983, when the programme of the medium-haul aircraft Shanghai Y-10 was closed and never went into a mass production.

Development and introduction of the COMAC C919 became the first attempt of Chinese aircraft manufacturers to enter international market of the narrow-body aircraft, which is dominated by products of two aviation industry giants – the Airbus A320 and Boeing 737.

The hard work on the narrow-body, twin-engine C919 project began in 2008, after the decades of trying to create an advanced aircraft manufacturer capable to compete with Airbus and Boeing. The C919 project, according to the idea of the aircraft manufacturers from China, was created as a solution to meet the growing demand for air transportation within local aviation market in China.

The economy class on the C919 will be able to accommodate up to 168 passengers and a hybrid-class cabin – 156 passengers. The maximum flying range will vary from 4075 km with the standard specifications to 5555 km with the improved ones. Moreover, the service life of the aircraft is supposed to be 90 thousand flight hours or 30 years.

As usual, several Western companies were involved in it. Avionics, communication systems, navigation and control systems were supplied by Rockwell Collins (USA) and its Chinese partners.

Initially the first flight of C919 was planned for 2014, and first deliveries – for 2016. But the deadline was postponed several of times due to the problems with production. Finally, in 2011 the production of the first prototype began. The C919 successfully completed its maiden flight this year on 5th May from Shanghai’s Pudong International airport, after being airborne for one hour and nineteen minutes.

After all, the manufacturer will have to obtain a certificate from the Chinese aviation authorities, make a test programme consisting of 4200 flight hours and deliver first aircraft to China Eastern Airlines in 2020.

Battle for the Chinese market

It is obvious that it will not be easy for the C919 to satisfy the demand on the Chinese market. Airbus and Boeing are not going to give up their positions within the growing Chinese market voluntarily. On the contrary, they will continue strengthening their positions in the Asian region and developing new airliners to kick out the competitors.

Airbus has already launched the A320 assembly line in Tianjin, in the north-east of China. Also, this year Boeing has started setting up its first overseas factory in Zhoushan, where they will build a Boeing 737 completion centre with the aim to deliver 100 planes per year.

Moreover, Boeing and Airbus are planning to expand the use of carbon fiber materials which improve the aerodynamic qualities of aircraft and reduce weight.

Promising but long way to go

The delay that occurred during the launch process of the C919 serial production indicates that the aircraft will have to compete with the new versions of the Airbus A320 and Boeing 737, which will outperform the C919.

Nowadays, guys from COMAC have no answer to two key advantages of Airbus and Boeing – an extensive customer base and the ability to maintain low-cost production. However, COMAC will be able to “bite off” a significant part of the Chinese aviation market mainly due to almost guaranteed sales to local airlines.

According to the Boeing forecast, China’s commercial aircraft fleet will quadruple by 2034.

Of course, the difference in a price between C919 and its Western competitors will attract carriers. There is a possibility that financing conditions and deals offered will be dumping. Overall, the determining factors will be design and technical parameters, but not China’s ability to organize mass production and financing.

COMAC has already received orders for 600 C919 airliners from 24 leasing companies or airlines, most of which are state funded.

The analysts say that foreign airlines are not investing in the aircraft projects that do not have certificates of Western regulators such as the US Federal Aviation Administration (FAA) and the European Aviation Security Agency (EASA). Moreover, there are no exploitation records and it is too early to talk about the competition on the global market.

Before receiving orders from foreign companies, COMAC will have to collect a lot of data about the aircraft functionality, since this information will be needed as a guarantee of aircraft’s reliability. The stage of flight tests and certification will be the answer to the question regarding the success of the product.

Without waiting for the results of the C919, COMAC is planning to create a wide-body – C929 airliner, which will be designed for more than 300 passengers and will compete with Boeing 777.