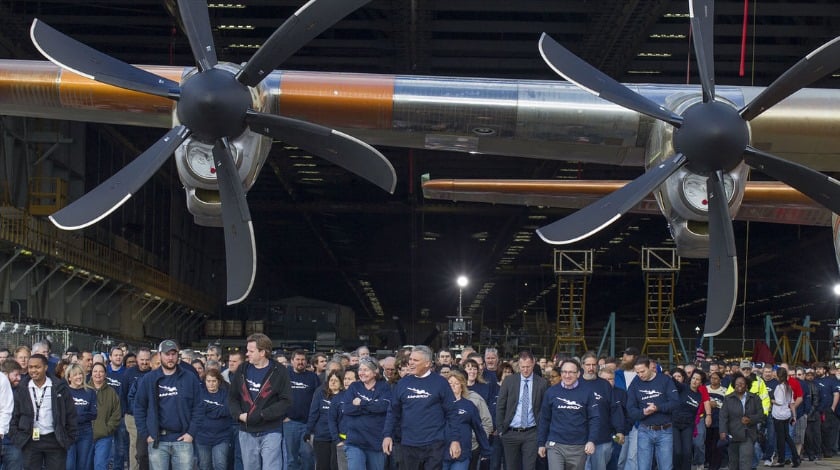 Lockheed Martin has officially introduced the world to the latest member of the C-130J Super Hercules family: the LM-100J commercial freighter.

Employees who designed and built the aircraft celebrated this new Super Hercules with a traditional “rollout” ceremony held at the Lockheed Martin Aeronautics facility located here. Team members walked this LM-100J out of the building that is home to the Super Hercules production line. The next stop for this milestone Super Hercules is the flightline, where it will prepare for its first flight this spring.

Lockheed Martin announced its intent to manufacture and market the LM-100J in February 2014. Lockheed Martin has filed for an FAA civil type certificate update and this first LM-100J will participate in flight test activity to support this process.

“Today’s rollout not only marks another accomplishment for Super Hercules, but it also reflects the aircraft’s capability to evolve to meet customer requirements. The LM-100J program has exceeded all expectations in moving from an idea to a reality,” said George Shultz, vice president and general manager, Air Mobility & Maritime Missions at Lockheed Martin.

“We are at this point thanks to hard work and dedication of Lockheed Martin employees and suppliers, who have literally designed and built this new chapter of Super Hercules operations. The FAA has been an essential partner in this aircraft’s production and we look forward to continuing to work together as we move into the LM-100J’s critical flight test phase. “

The LM-100J incorporates technological developments and improvements that result from years of military C-130J operational experience, including more than 1.5 million flight hours achieved by operators in 16 nations. This experience and advancement translates to an aircraft that will deliver reliable service in a multi-role platform for decades to come.

The LM-100J is the ninth production version of the Super Hercules aircraft and its commercial capabilities have the distinction of being the 17th different mission capability supported by the C-130J.

The LM-100J is the updated version of the L-100 Hercules, which was built by Lockheed Martin from 1964-1992. More than 100 L-100s were delivered to both global commercial and government operators, supporting cargo delivery requirements in almost every operating environment in the world.