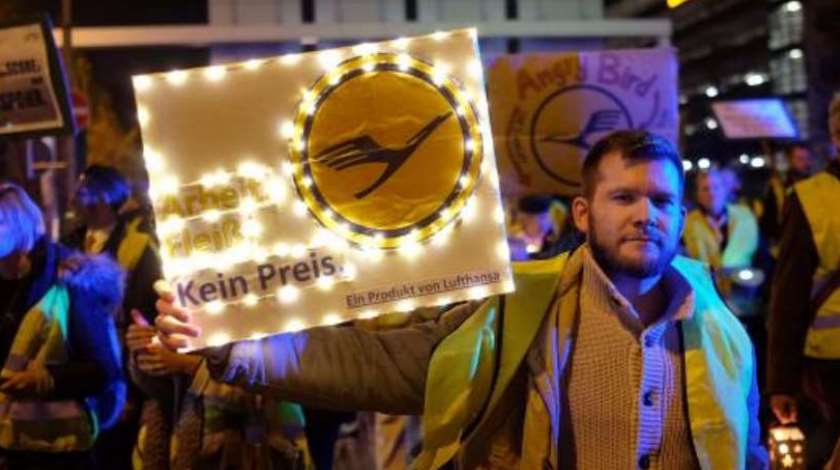 Despite having successfully obtained one-day injunctions through Düsseldorf and Darmstadt labor courts on Tuesday 10th November against striking cabin crew who began a 7-day walk-out on Friday 6th, Lufthansa have failed to see the strike stopped completely after both labor courts ruled against the airline and allowed the cabin crew to continue their strike.

19,000 cabin crew are represented by the UFO (Unabhängige Flugbegleiter Organisation e.V.) and as a result of the first four days of their strike Lufthansa was forced to cancel 2,800 flights, leaving 300,000 passengers stranded, though the union did not strike on Sunday. On Thursday 12th, the airline canceled 933 out of 3,000 flights, which affected approximately 107,000 passengers. Ruxandra Haradau-Doeser, a Kepler Cheuvreux analyst, has estimated the financial cost of this latest cabin crew strikes at about €100 million (US$107 million) though Lufthansa would not be drawn on a figure.

The strike has a come about as a result of negotiations which began back in December 2013 and which failed to reach a satisfactory conclusion last week with regard to pay, retirement benefits – especially those relating to early retirement packages – and working conditions. Lufthansa’s most recent offer to UFO included a one-off payment of €3,000 (US$3,210) per employee and acceptance of the union’s demands regarding early retirements, but only for current workers. The carrier also said it will scale back flights which was a proposal that UFO labeled as a “provocation.”
Lufthansa has already been struggling to cope with a similar dispute with pilots which has seen 12,800 flight cancellations within an 18-month period which cost the airline an estimated €352 million (US$377 million). The strikes by pilots were forced to stop last September when a German court ruled that the moves marked an illegal effort by the Vereinigung Cockpit union to fight corporate strategy. However Vereinigung Cockpit, the union representing nearly 9,600 pilots, announced on Tuesday that it had filed an appeal at the Constitutional Court, Germany’s highest court, against the ruling.