Mitsubishi Regional Jet: To Be Or Not To Be? 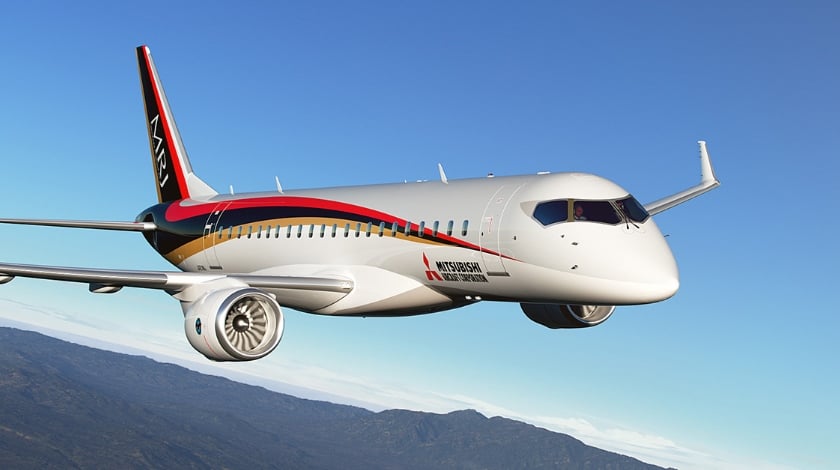 After the World War II, Japanese aerospace industry was totally cut off from creation and production of its own aircraft. Nevertheless, Japanese companies were among the main suppliers of various components for aircraft manufacturing corporations. This allowed them to gain useful and invaluable experience.

From idea to reality

As it was mentioned before, since the early beginning of modern aircraft, Japanese aviation suppliers played a crucial role in the production. The latest project was a Boeing 787 Dreamliner. In the production of these aircraft, Mitsubishi Heavy Industries supplied about one third of all components, including a composite centroplane.

Moreover, in the production of a Boeing 767, Mitsubishi supplied 15% of all components, and in the Boeing 777 programme the share of Mitsubishi components was brought up to 20%.

In 2007, Mitsubishi presented a conceptual project of a new regional aircraft at the Le Bourget airshow, where they showed visitors a full-size model of the future airliner saloon. Then Mitsubishi set itself an ambitious goal – to create world’s first regional jet fully made of composite materials.

However, after some time Japanese engineers became more realistic about modern technologies and chose a more conservative approach. interesting fact is that Mitsubishi supplies a Boeing 787 with a composite centroplane, but in the production of its regional aircraft they decided to use aluminum alloys. The engineers calculated that the use of composite materials does not give a significant advantage in reducing the mass of the aircraft.

Representatives of Mitsubishi note that only 12% of all components in the MRJ construction will be made of composite materials.

Not that easy as they thought

The MRJ has been in development since 2003, with its first design announcement being made at the 2007 Paris Air Show — it was first offered for sale in 2008. The maiden flight of the MRJ took place on 11 November 2015. The aircraft was flying for an hour and a half and successfully landed in Nagoya, Japan.

Initially the aircraft was scheduled to be delivered in 2013, however, the deadline slipped several years to mid-2020. In March 2017 the flight certification programme was extended from 2500 to 3000 flying hours, without Mitsubishi confirmation. Four out of five delays were caused, at least partly, by such failures as inappropriate preparation of necessary documents for certification or similar errors.

As a result, the cost of development ballooned to 350 billion yen (US$3.17 billion) and there are fears that the project might never be able to fully recover its costs.

The latest, or fifth, delay was required to rework a number of systems and change the scheme of power supply for the aircraft. Additionally, some components had to be moved to improve balancing. Mitsubishi explained that the decision to make changes in the project was initiated after the international experts were involved. Mitsubishi is new to the regional jets game and is obviously putting safety first.

It is already 7 years of delay and at the moment the MRJ project is under the personal control of the MHI president – Shunichi Miyanaga.

The MRJ will be powered by PurePower PW1200G engines by Pratt & Whitney, which will help to reduce fuel consumption of more than 20% compared with other regional jets currently in operation.

The MRJ will feature a 2-2 seating configuration in every row, meaning that there will be no middle seat. The seats will be 18.5 inches wide, which is huge in comparison to most other planes. Even the Airbus A320 and Boeing 737 fleets do not have seats that wide.

Despite the delays, Mitsubishi still intends to begin deliveries to its customers in 2020. The first MRJ-90 will be delivered to All Nippon Airways (ANA).

The largest order of 200 airliners was placed by SkyWest – the largest regional airline in the world.

The MRJ expects to push aside and overcome Brazilian Embraer and Canadian Bombardier in the segment of regional passenger aircraft. Moreover, Russian Sukhoi and Chinese COMAC are trying to break into the same market.

According to the forecasts, airlines will order more than 4360 regional aircraft with a total cost of about $135 billion. experts say that Mitsubishi is capable to take 27% of this market.