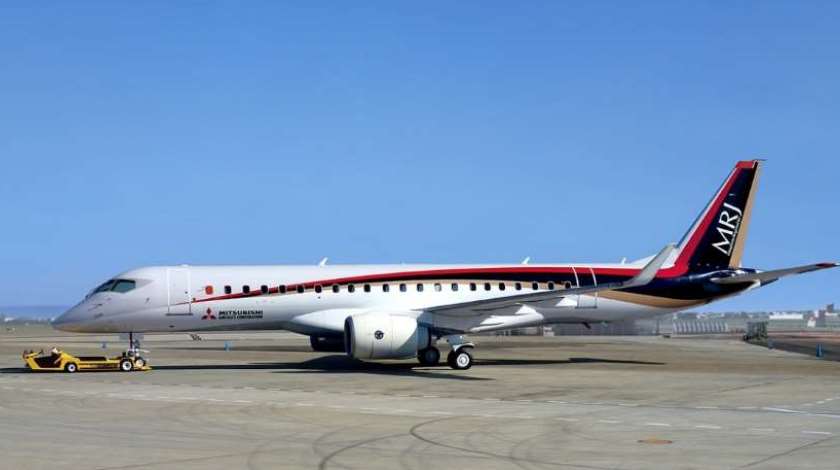 It was at the 47th Paris Airshow that Mitsubishi unveiled its plans for the first Japanese plane to be built since the NAMC YS-11 in the 1960s, an aircraft that never actually became profitable. The development has been subject to a number of delays, including those in the procurement of the Pratt & Whitney engines. However despite 3 major deadline alterations, this hopefully final one will see the aircraft’s maiden flight take place on November 11th this year, with production expected to start in 2017. Currently there are firm orders for 233 of the MRJ90, which seats 87 passengers, while there are further option orders for an additional 182 aircraft.

The first MRJ flight test of an MRJ90 will see it fly above Nagoya Airport for over an hour before returning. Mitsubishi Aircraft however have cautioned that the Nov. 11th “flight schedule is subject to change if deemed necessary due to conditions relating to the aircraft, weather, etc.” In the end Mutsubishi intend for there to be five flight test aircraft in the MRJ flight test program, four of which will transfer to the US subsequent to initial flight testing in Japan.

The first MRJ90 is due to be delivered to, All Nippon Airways in the second quarter of 2017. With such a busy order book the second Japanese carrier to place an order, Japan Airlines, will not see delivery of its 32 ordered MRJs begin before 2021.
While Bombardier is focusing on its larger CSeries aircraft which seats over 100 passengers, airlines have little alternative to Embraer for smaller size aircraft. “There may be a slot for the MRJ,” said Sasha Mr Tusa, aerospace and defense analyst at Agency Partners in London. In the meantime Sukhoi Superjet 100 of Russia and China’s Comac ARJ21 are also making inroads into the market but have not gained much traction.

The man responsible for selling the MRJ is Yugo Fukuhara, who says that “Japanese reliability and quality” will deliver success and he does baulk at direct comparisons made with Embraer’s E190, as MRJ is promising wider seats, less airport noise and 20 per cent better fuel economy. “We’re not selling at a particularly low price but the value proposition is low running costs,” said Mr Fukuhara.

While Embraer is also adopting the same new Pratt & Whitney engines MRJ will stay in an advantageous position having the benefit of a more modern, aerodynamic design.