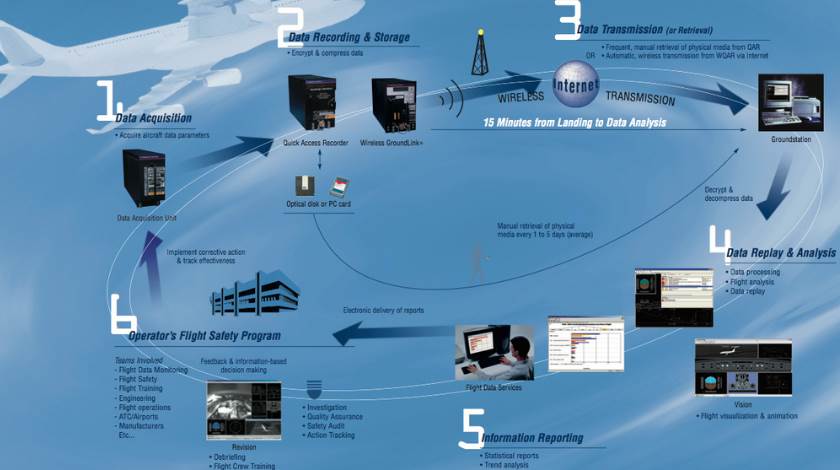 As the promise of using reams of data to improve processes and guide maintenance events grows more viable, some operators are breaking new ground by leveraging current data-driven programs in a quest for safer, more efficient operations. But while so-called Big Data’s vision depends on proactive measures, today’s analytics-enhancement efforts often focus on what is necessary rather than exploring what is possible.

Flight data monitoring programs (FDM) are a prime example. European airlines are required to have them, and though such programs in the U.S. are voluntary, most large commercial operators are adopting them.

Most do the bare minimum needed to make their programs viable, which means manually offloading data a few times a month. But those looking to shift FDM data transfer from the “sneakernet” to an automated process—often using cheap, light quick-access recorders (QAR), then offloading data via cellular or Wi-Fi networks—are seeing more potential.

“No avionics manager wakes up one morning and says, ‘I need to put QARs on all of my airplanes,’” says Mike McConnell, director and vice president of business development at Avionica. “Hardware is just hardware, and software is just software. It is the mandate to have data, and do something with it, that is the issue.”

Armed with easier ways to collect and manage data, industry is waking up to the idea that current programs, run more efficiently, can shift from meeting requirements to solving problems. Flybe took its FDM program, added Avionica equipment and began offloading data after every flight. In one case, it was able to use postflight data to determine that a rough landing of one of its Bombardier Q400s was not significant enough to remove the aircraft from service. Absent the data, the aircraft would have been parked and technical experts from the OEM called in.

While examples like this are compelling, QAR upgrades continue to be driven by a desire to automate FDM programs. Still, the Flybe example illustrates what can happen when operators look beyond baseline needs.

McDonnell says Avionica is in talks with several U.S. carriers about fleetwide QAR upgrades, including handfuls of aircraft that are not too many cycles from the desert. And while dumping legacy recorders is the primary driver, McConnell says the opportunities are allowing avionics providers to pose big-picture questions: “How does data make me smarter? How does it make me safer? How does it make me more efficient?” He adds, “Once you can prove that, you have a chance to introduce [broader analytics] to operators that never thought they wanted it or needed it.”

In other cases, efficiencies are created by connecting existing programs. Seabury MRO Solutions—formerly Volartec—has been approached by a Caribbean-based customer that uses its Alkym maintenance software, says Seabury MRO vice president John Barry. The request? Connect Alkym to the airline’s Flyht Afirs data-streaming service, so that key operational data such as gate out, wheels off, wheels on and gate in is fed automatically into the maintenance software at the tail-number level.

Small efforts such as these are a precursor to the promise that new-technology aircraft such as the Airbus A350 and Boeing 787 hold for producing terabytes of data that can be mined for trends. PwC, cognizant of the oft-heard refrain that aircraft health monitoring and predictive maintenance are poised to transform MRO, sought to see what could be done fleetwide at an airline today, regardless of the types of aircraft flown.

Using a U.S. major as a test case, PwC mined routine fault data generated by onboard systems as well as text entered into both pilot and mechanic logbooks. It found that such data sets can be used to help predict future issues and, somewhat surprisingly, that the logbook text—rarely, if ever, aggregated and searched for trends—was at least as helpful as what was being captured automatically.

“The good news is that leveraging data is no longer a strategy of the future that requires large investments in IT infrastructure, new technologies, and fleets,” writes Rick Wysong, director of PwC transportation and logistics advisory, in a blog post that touches on the work.

PwC’s next steps include looking at only logbook data to validate how useful such “unstructured” data sets can be. If all goes well, the next step may be finding a customer willing to put its own data to the test, with an eye on beating Big Data to the punch.