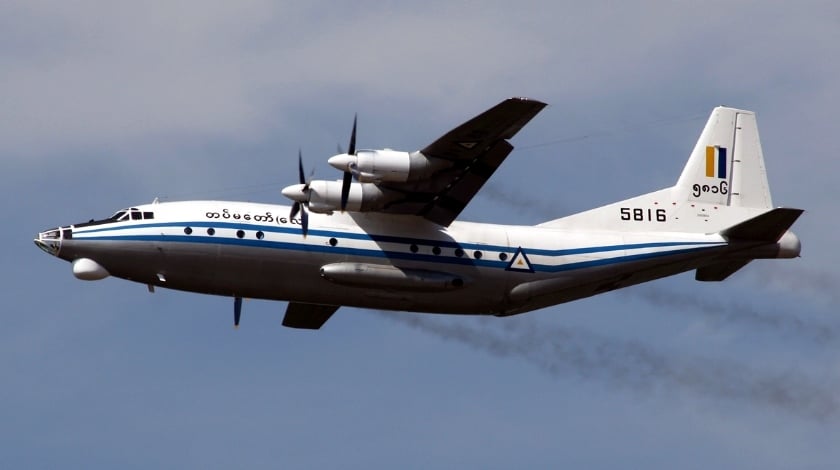 Pieces of a Myanmar military plane which went missing with more than 100 soldiers and family members aboard were found in the Andaman Sea late Wednesday, a local official said.

Navy ships and aircraft had been searching since the afternoon when the plane lost contact with air traffic controllers. The Chinese-made Y-8-200F transport plane left the coastal town of Myeik at 1:06 p.m (0636 GMT) heading north to Myanmar’s largest city of Yangon on a regular weekly flight that visits several coastal towns, officials said.

The commander in chief’s office said the plane lost contact at about 1:35 pm (07:05 GMT) off Myanmar’s southern coast.

“Now they have found pieces of the damaged plane in the sea 136 miles (218 km) away from Dawei city,” said Naing Lin Zaw, a tourism official in Myeik, adding the navy was still searching the sea.

There was conflicting information about the number of people on board.

There are conflicting reports on the number of passengers as aviation officials said 105 people were on the flight but a military spokesman later declared it was 120. The maximum capacity of the aircraft is 200 people, said a military officer. The air force source said more than a dozen of those on board were children.

Fifteen people are said to have survived. No information is known on their condition.

Four naval ships and two air force planes were sent to search for the plane, which was flying at an altitude of more than 18,000 feet (5,486 metres).

It is monsoon season in Myanmar but there were no reports of bad weather at the time the plane went missing.

“We think it was a technical failure. Weather is fine there,” an airport source told AFP, asking not to be named, adding there was no news of the plane so far.