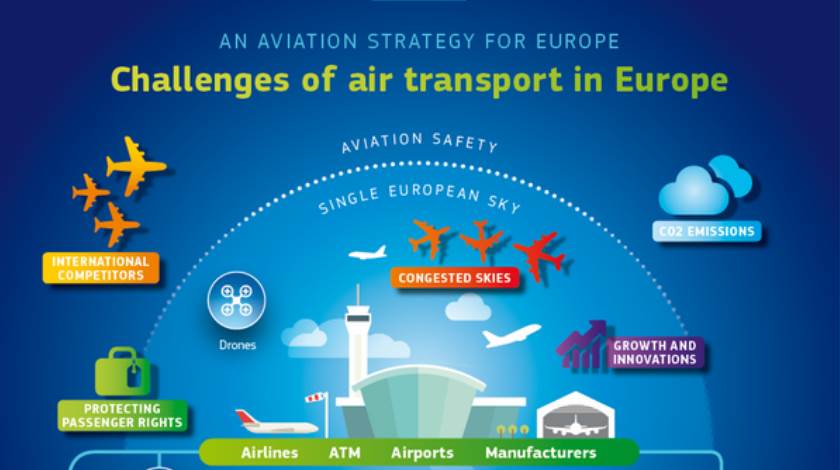 European transport commissioner Violeta Bulc has detailed Europe’s new aviation strategy, although some stakeholders have criticized its lack of deliverables.

Marking the culmination a year’s work, Bulc unveiled the “Aviation Strategy for Europe” during a media briefing in Brussels Dec. 7. “The goal of the Aviation Strategy is to strengthen the entire EU [European Union] transport network. Europe must be a leading player in international aviation,” Bulc said. “Planning now for all aspects of EU aviation is vital.” The Commissioner said the strategy will lead to “safer, cheaper and cleaner flights.”

She aims to create a framework for European aviation competitiveness, extend the bloc’s traffic rights and update EASA’s safety oversight regulation, including new rules for drones. Innovation and digital technologies will play a key role, as a “core enabler for growth”. Other regulatory proposals, such as passenger rights, the Single European Sky and slots reform, which have stalled, will be unblocked.

The Commission will clarify the legal framework for labor laws for workers within the aviation industry and issue interpretative guidelines to give clarity and legal certainty on EU-airline ownership and control. When questioned twice on whether this could involve lifting or easing of the 49% foreign ownership cap, Bulc did not give a clear answer. “It would be reciprocity as part of a comprehensive agreement,” she said, referring to her plans to create new comprehensive EU-aviation agreements with third countries.

While the issue of Gulf carrier competition was not directly addressed, the Commission said it is considering “new measures to address unfair practices” from third countries and third-country operators through the new comprehensive agreements, which would replace individual member state bilaterals. In addition to route rights, the agreements could extend to air traffic management, safety, security, competition, the environment, social issues and passenger rights.

The Commission has asked the EU member states—represented by the Council of the EU—for permission to negotiate with a number of third countries. The EU already has comprehensive aviation agreements with the US and Canada, and is currently finalizing one with Brazil. “I hope the Council will grant us an open mandate to go and negotiate,” Bulc said, adding she is optimistic to secure this clearance. “The Council has the last word, but we hope they are ambitious as we are.”

The Commission is also seeking authorization to negotiate safety agreements with China and Japan, along with one-stop security arrangements with Canada and Montenegro which will come into effect on Feb. 29, 2016. One stop security, which is already in force between the EU and the US, allows passengers to transfer onto a connecting flight without being subjected to a second set of checks.

Europe is predicted to reach 14.4 million flights by 2035, 50% up on 2012, so the EU plans to address capacity, efficiency and connectivity constraints. With airspace fragmentation costing the industry at least €5 billion a year, the Commission will invest €430 million ($468 million) each year until 2020 in the Single European Sky (SES) SESAR project. “We would like to spread the Single European Sky as far as possible, beyond EU borders. There is a chance to establish conditions for global single skies,” she said.

The Commission will also seek ways to reduce the burden of security checks and costs, through new technologies and a risk-based approach.

On the technical side, the Commission plans to “reshape” EASA to make it “more lean and more fit”. It will also “unleash the full potential of drones,” through a legal framework which will improve safety, give greater clarity and legal certainty for operators. This framework will also address concerns related to privacy, data protection, security and the environment.

During December, Bulc will present the Aviation Strategy to the European Parliament and the Council of the EU. The Dutch presidency will then host an Aviation Summit on Jan. 20-21, where stakeholders will be given the opportunity to voice their first reactions to the plan.

“On the basis of these discussions, the Commission will assess how implementation should proceed over the course of the current mandate. Some actions – such as the evaluations of existing legislation – can move ahead without delay. Others will take the form of Commission proposals and therefore be subject to normal consultation and decision-making procedures,” the Commission said.

The European Cockpit Association (ECA), which represents Europe’s pilot associations, also criticized the policy for being “short of ambition” and lacking concrete measures on labor issues such as atypical employment forms, social dumping and flags of convenience. “Some proposals in the new EASA Regulation may even encourage social dumping and entail a lowering of social standards in aviation,” the body said.

“On a number of issues, we need to go further than describing what we already know,” ECA president Dirk Polloczek said.

Airports body ACI Europe, however, welcomed the strategy. “The Commission has gotten it right—taking stock of the increasing strategic relevance of air connectivity for our economy. What it has put on the table today is a commendably pragmatic approach—one that recognizes aviation growth as a key enabler of the EU’s wider growth and jobs agenda,” ACI Europe DG Olivier Jankovec said.