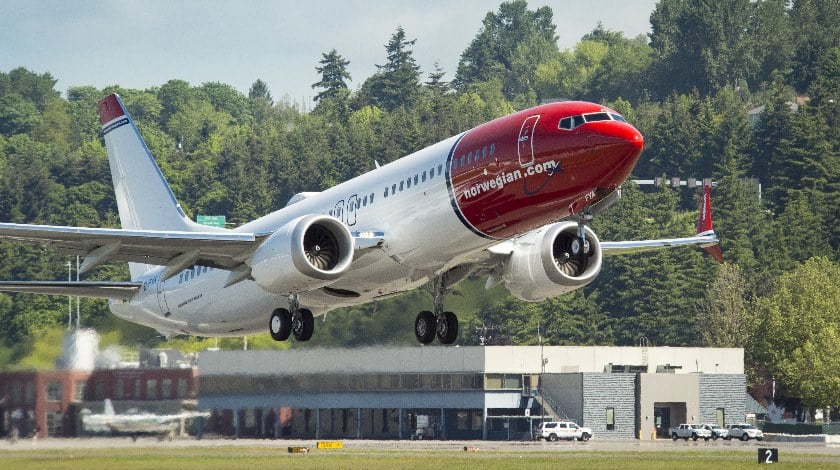 Boeing and Norwegian celebrated the delivery today of the airline’s first two 737 MAX 8s. Norwegian is the first European carrier to take delivery of the 737 MAX and will deploy the airplanes on transatlantic flights between northern Europe and the east coast of the United States.

“We have been eagerly awaiting the delivery of our Boeing 737 MAX, and we are overjoyed to have it join our fleet today,” said Bjørn Kjos, Norwegian’s Chief Executive Officer. “We are the first European airline to operate this brand-new aircraft, and we’re also the first airline in the world to operate it to and from the United States. This aircraft allows us to open up new, unserved routes and offer both Americans and Europeans even more affordable transatlantic fares. It will also provide our passengers with a quieter onboard experience, whilst it significantly reduces both fuel use and carbon dioxide emissions.”

Norwegian is the sixth largest low-cost carrier in the world and flies over 500 routes to more than 150 destinations in Europe, North Africa, the Middle East, Thailand, the Caribbean and the US.

“The 737 MAX 8 is a significant addition to Norwegian’s fleet, enabling the airline to start the next chapter in its incredible growth story of low-cost, long-haul travel,” said Boeing Commercial Airplanes President and CEO, Kevin McAllister.

“It is a tremendous honor that a brand as innovative as Norwegian will be the first European carrier to fly the 737 MAX, and we are certain that this airplane will play a key role in its continued success.”

The 737 MAX family has been designed to offer customers exceptional performance, flexibility and efficiency, with lower per-seat costs and an extended range that will open up new destinations in the single-aisle market.

It is the fastest-selling airplane in Boeing history.