Over 11,000 Flights Canceled During Stormy US East Coast Weekend 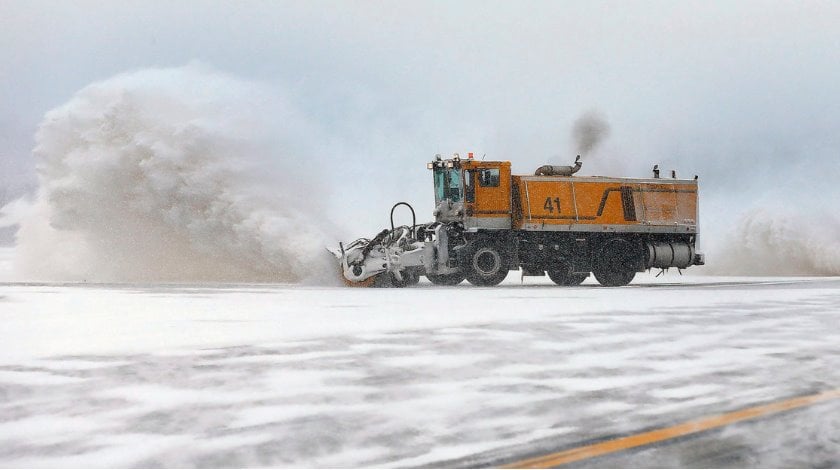 More than 8,000 flights were canceled in the US over the weekend, according to flight tracking site FlightAware, as a major snowstorm hit the Mid-Atlantic region.

FlightAware reported more than 3,000 canceled flights on Friday, Jan. 22, when the storm began. Disruptions continued on Monday, Jan. 25, as 1,920 flights were canceled in the US as of 1 p.m. EST, according to FlightAware. More than 3,600 flight delays were recorded in the US Saturday and Sunday, Jan. 23-24.

At Washington DC airports—Reagan National and Washington Dulles—Delta Air Lines’ ground crew was out in force though the weekend, clearing snow and deicing aircraft and ground equipment in preparation for Monday’s first arrivals. Delta planned to be operating at near-full schedule by early Monday afternoon. In New York, Delta is reporting “cleanup has gone smoothly” at JFK International, where a full schedule is planned for Monday. However, at LaGuardia and Newark, “snow removal efforts are hampering operations,” Delta said. Nonetheless, flights at the two airports have resumed.

During the Saturday-Sunday period, American’s mainline operations canceled 1,568 flights within, into or out of the US, with 215 more canceled as of 1 p.m. Monday, Jan. 25. Adding in its regional operations, American canceled 5,800 flights Friday through Saturday, Jan. 22-24, with an additional 400 canceled so far on Monday, Jan. 25.

JetBlue told ATW that as of Monday it resumed service at all of its airports, with approximately 20 flights canceled in the Washington, DC, area due to the airports’ recent reopening.

United Airlines canceled 863 flights on Saturday and Sunday, with 239 scratched as of 1 p.m. Jan. 25; Delta had 765 flight cancellations and JetBlue registered 635 grounded flights during the Saturday-Sunday period.

New York’s airports were affected particularly hard by the storm. New York-JFK canceled 772 departing flights and 708 incoming flights on Saturday and Sunday. Newark International had 639 outbound and 616 inbound flights canceled during the same period. LaGuardia had 604 outbound and 594 inbound flights canceled, roughly 88.5% of its flights on Saturday and 75% of its Sunday flights. New York JFK reopened for flights Sunday morning; LaGuardia was operational at noon, and Newark’s flights resumed Sunday afternoon.

BWI, which reported snowfalls of 29.2 inches as of Sunday morning, had 420 departing flights and 416 inbound flights canceled Saturday-Sunday, roughly 89% of its Saturday traffic and 72% of Sunday’s. BWI reported it will gradually resume regular operations Monday Jan. 25 with some flight cancellations expected.

By and large, airlines serving the affected region are waiving their flight change/cancellation fees. At JetBlue, passengers who had booked travel on or before Jan. 20 can rebook travel through Friday, Jan. 29, with no additional charges, or they can get refunds for canceled flights. American Airlines and American Eagle passengers can rebook flights through Jan. 31 and have the one-time ticketing fee waived. Southwest is allowing its customers to rebook within 14 days of the original travel date. United is waiving its change fee and any difference in fare for new flights between Jan. 23 and Feb. 2, as long as travel is rescheduled in the same cabin/fare class and between the same cities. Delta is offering one-time changes to Jan. 22-25 tickets without fees, with a new travel ticket reissuing and travel-start-date deadline of Jan. 29; Delta, though, is indicating “additional collection in fares may apply.”