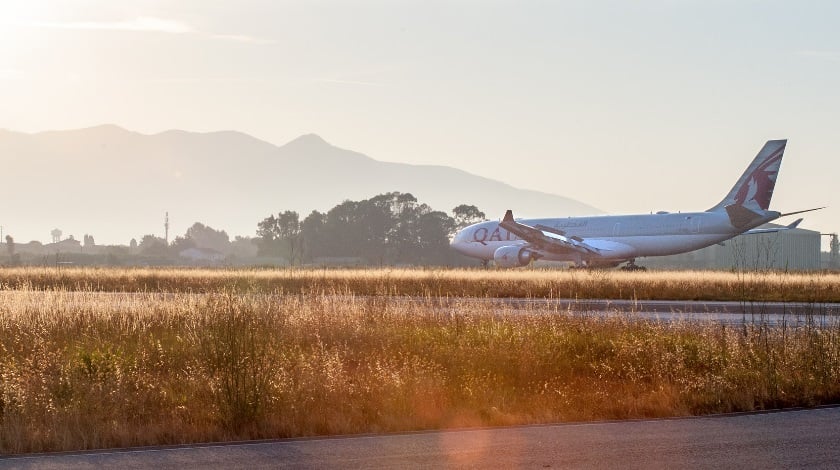 The Italian city of Pisa welcomed the first Qatar Airways flight to arrive at its international airport from Doha, Qatar.

The Airbus A330 landed and was greeted by a celebratory water canon salute as well as a welcome ceremony with flags and drums from people in traditional costumes. The VIP delegation on board the flight, which included the airline’s Senior Vice President for Europe, Mr. Jonathan Harding, were welcomed by airport authorities representatives Mr. Marco Carrai, President of Tuscany Airports; and Ms. Gina Giani, CEO of Tuscany Airports as well as Mr. Marco Filippeschi, Mayor of Pisa.

Pisa is the fourth city in Italy to be served by Qatar Airways, which has been flying to Milan since 2002, to Rome since 2003, and to Venice since 2011.

The airline already offers five daily frequencies to Italy: two to Milan and Rome and one to Venice. The new daily flight to Pisa will increase the airline’s weekly flights from Doha to Italy from 35 to 42.

In the last year, Qatar Airways has strengthened its existing Italian routes and demonstrated its commitment to the Italian market by introducing new, wide-body aircraft generating a 35 per cent increase in passenger capacity.

Qatar Airways Group Chief Executive, His Excellency Mr. Akbar Al Baker, said: “Pisa is an important addition to our route map, strengthening our ties with the people of Italy by offering them another opportunity to connect with more than 150 business and leisure destinations. We are equally delighted to be giving our loyal passengers from around the globe the chance to visit the beautiful city of Pisa and the surrounding region of Tuscany.”