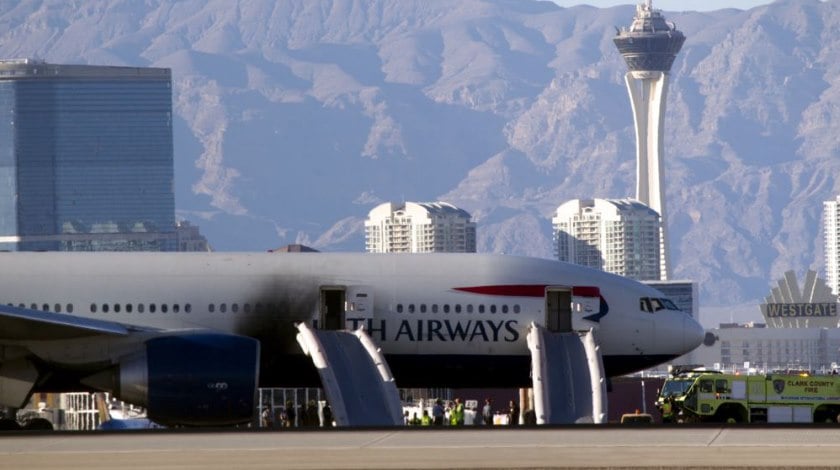 Flightworthiness tests have been conducted in Las Vegas on a British Airways jet that was damaged by an engine fire while passengers escaped an aborted takeoff almost six months ago, officials said Friday.

An airline official wouldn’t say when the repaired Boeing 777 will be flown out of McCarran International Airport, or where it will go. But airport spokeswoman Christine Crews said it was towed late Thursday to an inactive runway for engine testing while firefighters stood by. No mishaps were reported, and airport operations weren’t affected.

British Airways Flight 2276 was barreling down a runway Sept. 8 for what would have been a 10-hour flight to London with 157 passengers and 13 crew members aboard when its left engine burst into flames.

The plane screeched to a halt with fire and smoke billowing beneath the wing while all 170 people escaped down evacuation slides. No one was seriously hurt.

Since then, the aircraft has remained in a corner of the McCarran property while the fire-damaged General Electric engine was removed and replaced by the manufacturer.

Victoria Madden, a British Airways spokeswoman in New York, said in a statement that Boeing technicians have worked to repair the aircraft “to the same high standards as if the aircraft was brand new.”

The aircraft was built in 1998, outfitted with GE90 engines of the type used in most Boeing 777s. It was registered to British Airways a year later. In its 14 years of service, it flew nearly 77,000 hours, according to the British Civil Aviation Authority.

Early findings by the National Transportation Safety Board were that a catastrophic failure occurred at a crucial compression point when the engine was under the highest pressure, although investigators said they weren’t immediately sure what caused it.

On the tarmac, investigators recovered several 7- to 8-inch fragments from the spool assembly of the high-pressure engine compressor. They noted some shards apparently sliced through the armored shell around the engine.

Board spokesman Eric Weiss said this week the investigation was continuing.

GE Aviation spokesman Rick Kennedy said Friday the company examined more than 50 model GE90 engines of similar configuration and age, and found no anomalies and no clues about what might have caused the fire in Las Vegas.

“Those engines were without issue,” Kennedy said. “We’re looking at other early-model GE90s to see if there’s a pattern. So far, they haven’t found anything.”

GE Aviation has said the spool, which holds the blades in the GE90-85B engine, was among the first ever made for that model in 1995.

About 400 base GE90 engines are being used to power 167 aircraft worldwide, according to the company.

Kennedy said the spool and blades of all GE90 engines built before 2001 are being inspected during scheduled overhaul and maintenance.