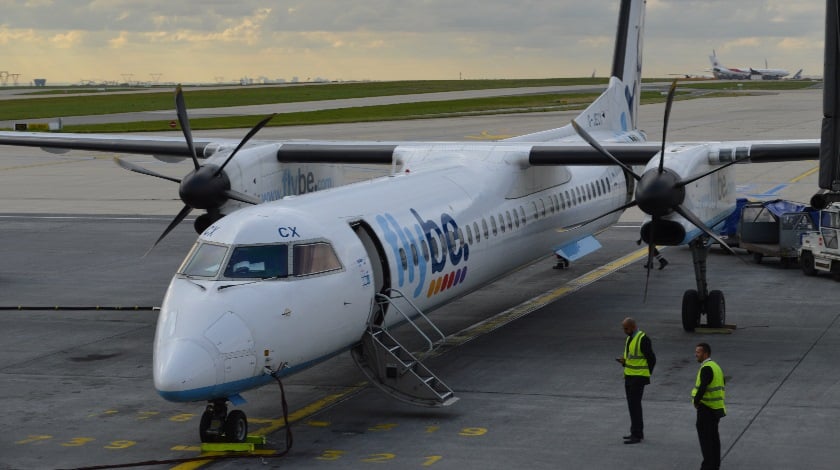 Adjusted profit fell by almost half for the first six months of the year, to £8.4 million ($11 million), as the carrier spent 36% more on maintenance than in the prior-year period.

This was largely due to efforts to improve the dispatch reliability and on-time performance of the Q400 turboprops that the carrier has been adding to replace most of an ill-fated order from 2010 for 24 Embraer jets.

Being a regional U.K. airline, Flybe also suffers more from the post-Brexit-referendum collapse in the pound, which increases its cost of dollar-denominated spares and rotables. Long-haul carriers such as British Airways, in contrast, can use their dollar revenues to offset this.

“The first priority was to reduce the number of flight cancellations, particularly due to aircraft serviceability issues,” says Flybe of its Q400 aircraft.

Although Flybe managed to reduce the number of cancelled flights, its on-time arrival performance actually deteriorated over the six months to Sept. 30, compared with the previous year.

The airline said its determination to operate services that might have been cancelled contributed to the delays, but it also acknowledged a need for a maintenance rethink.

“We are taking a fresh look at maintenance strategy and operational processes to address the increase in maintenance costs and are working with Bombardier on resolving common issues,” says Flybe.

Flybe’s reliability problems are a further boost for Bombardier’s rival, ATR, which has the turboprop market increasingly to itself. Some have ascribed dwindling sales of the Q400 to reliability issues at other carriers in the past, such as Austrian and Pinnacle.

Meanwhile, ATR has just launched its first new-build turboprop freighter, the ATR 72-600F, while the passenger version has already eclipsed its order total from 2016.