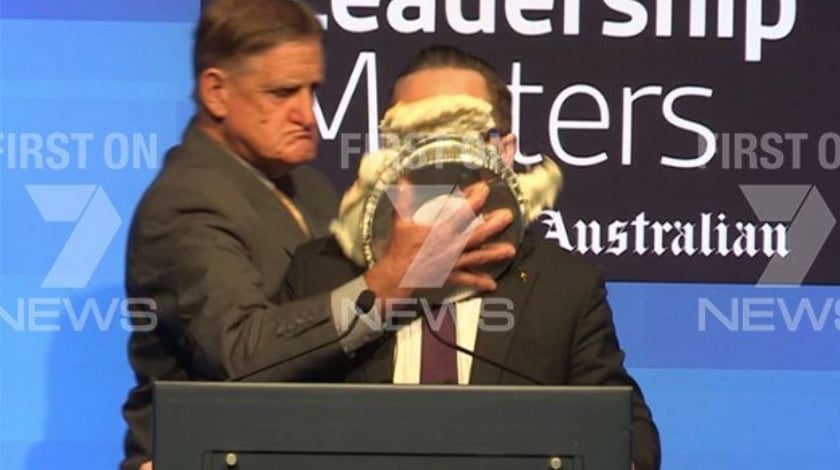 Qantas boss Alan Joyce has had a cream pie shoved in his face while speaking to a packed business breakfast in Perth.

He was less than two minutes into a speech to 500 executives at Perth’s exclusive Hyatt Regency hotel on Tuesday when a man in a suit appeared from behind a curtain on the podium and smeared the pie all over his face.

The culprit, who appeared to be in his 60s, didn’t reveal his motive as security pounced and led him away to be arrested while the multi-millionaire CEO was left with an almighty mess all over his face and suit jacket.

“I don’t know what that was about, we might take a break for a second,” Mr Joyce told the shocked audience who could be heard gasping as the bizarre event unfolded.

After a quick clean up Mr Joyce returned to the podium to applause, joking that he needed the number of a Perth drycleaner.

When asked about the flavour of the pie he replied : “I didn’t have a chance to taste it – it was mostly on my glasses”.

He said he had never experienced a pieing before but in nine years as the Qantas CEO, “a lot of things happen”.

Six years ago Mr Joyce received plenty of unfavourable attention when he grounded the entire Qantas fleet during an industrial dispute but he also turned around the national carrier’s financial fortunes, delivering a record $1.53 billion profit last year.

When Mr Joyce, who is gay, was asked if his advocacy on social issues such as same-sex marriage made him a target he said that was pure speculation and police would investigate.

WA Premier Mark McGowan, who later joined Mr Joyce at Perth Airport to announce upgrades that would allow Qantas’ recently announced non-stop flights to London and the benefits to WA, praised him for his grace under pressure.

“Security is important, that person could’ve done anything and I just urge people not to think that sort of behaviour is normal,” he told reporters.

Pieing can be a criminal offence. UK comedian Jonathan May-Bowles was jailed in 2011 after pieing Rupert Murdoch while the media mogul was giving evidence at a British parliamentary inquiry.