While Qantas’s first destination with the Boeing 787-9 has been kept under wraps for now, the aircraft’s seat configuration is the strongest indication yet the Dreamliner will be deployed on some of the world’s longest routes.

In front of invited guests, media and airline staff at Qantas’s Mascot base on Thursday morning, chief executive Alan Joyce unveiled the seat layout that, at first glance, features a heavy emphasis on premium seating while attempting to give something back to those flying in the main cabin.

The 70 business and premium economy seats represent 30 per cent of the cabin, which is the highest percentage of premium seats on board any of Qantas’s widebody fleet.

By comparison, the four-class Airbus A380 has 23 per cent of its 484 seats in first, business and premium economy, while the A330-300s that are used mainly to Asia have nine per cent of the 297 seats in business and the rest in economy.

The table below has the full breakdown of Qantas’s widebody fleet.

Boeing lists its 787-9 with a range of 7,635nm when carrying 290 passengers in a two-class configuration.

The Qantas fit out suggests it will be looking to maximise the range performance of the aircraft for use on any number of often mooted ultra long-haul routes.

As a reminder, Perth-London Heathrow is 7,829nm and Melbourne-Dallas/Fort Worth is 7,814nm. Meanwhile, Sydney-Chicago is 8,022nm. The first route was expected to be announced “in the coming months”, Qantas said.

“We’re planning to make the most of the 787’s amazing range, so we’ve designed the cabin to give Qantas passengers a better experience on long-haul flights,” Joyce said in a statement.

Currently, the longest route operated by a 787-9 is United’s 7,339nm San Francisco-Singapore nonstop service, which kicked off June. United configures its 787-9s with 48 business, 88 extra legroom economy and 116 standard economy seats for a total of 252 seats. Singapore Airlines (SIA) uses Airbus A350-900 equipment on the same route.

Business and economy seats get a makeover 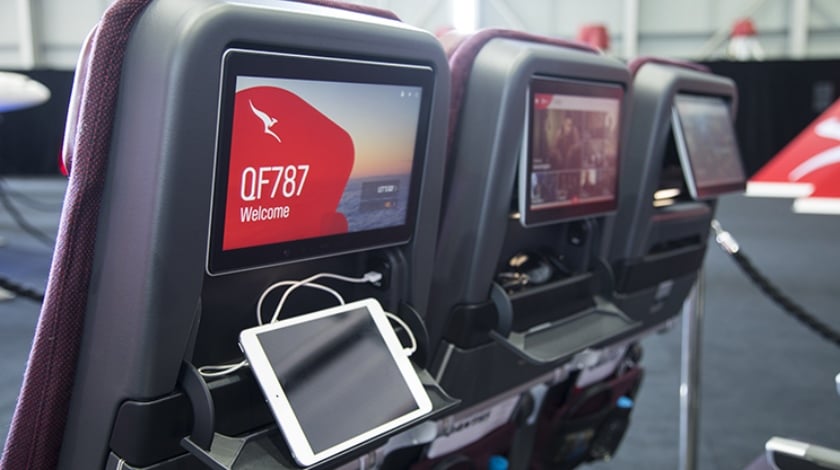 Qantas described the business class seat chosen for the 787-9 as an “evolution” of what is currently on board all A330-300s and all but two A330-200s that fly to Asia, Honolulu and on domestic trans-continental routes.

The Thompson Aero Seating product features direct aisle access for every passenger and can be partially reclined during takeoff, and landing has been given a refresh in collaboration with Australian industrial designer David Caon, Qantas said.

In economy, Qantas has adopted the industry standard for the 787 of nine seats per row in a 3-3-3 layout.

While that means a seat width of less than 18 inches, Qantas pitched its 787-9 economy seat at 32 inches, one more inch of precious legroom than on board its A380s.

The seats themselves have been designed by Recaro – the same manufacturer that supplies the new economy seat on board Qantas’s refurbished A330s – and feature extra storage spaces, a tablet holder, USB and power ports, a footnet, an extra light and the latest high-definition seat-back entertainment screen.

“Many of the cabin design elements reflect what our customers have told us. Personal storage rates really highly, so we’ve created extra space in economy for customers to store their personal devices and water bottles,” Joyce said.

“We’re also redesigning the in-flight experience for the Dreamliner, from rethinking our menus to making better use of the self-service bars during different phases of flight.”

Qantas has also promised a “revolutionary” premium economy seat, with details to be unveiled “in early 2017”.

Japan Airlines is currently the only operator of the 787 with eight across in economy. ANA had eight abreast in economy for a while, but has now switched to nine abreast across its fleet of 787-8s and 787-9s.

Cabin density at the lower end compared with other 787 operators

Qantas has one more seat than Etihad Airways, which has 235 seats on its three-class 787-9 comprising eight in first, 28 in business and 199 in economy.