Rostec Assembles the 300th SaM146 Current Engine for the SSJ 100 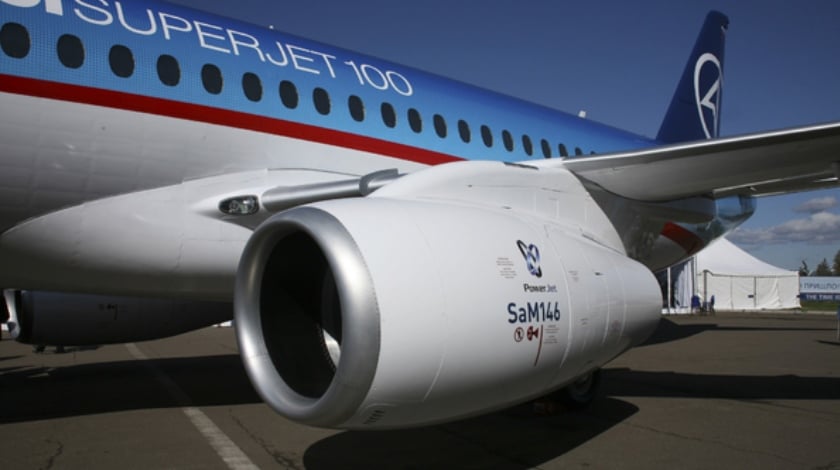 The 300th Russian-French SaM146 current engine for the Sukhoi Superjet 100 (SSJ100) aircraft has been assembled at UEC – Saturn (operating as part of Rostec’s United Engine Corporation) and delivered to Sukhoi Civil Aircraft Company. To date, the SaM146 engine fleet has logged over 700,000 flight hours.

The SaM146 is an integrated power plant that incorporates an engine and a nacelle equipped by a thrust reverser. Deliveries and all after-sales services on the SaM146 are performed by PowerJet, a Franco-Russian joint venture between Safran Aircraft Engines and UEC – Saturn. UEC – Saturn, operating as part of Rostec State Corporation, is responsible for the design and manufacturing of a fan, a turbine and a low-pressure compressor, as well as for the general assembly and testing of the SaM146 engine, while the area of responsibility of Safran Aircraft Engines (France) covers a compressor, a high-pressure turbine, a combustion chamber, an accessory gearbox, AFC and power plant integration. The SaM146 engine and its manufacturing process are certified to the EASA and IAC AR regulations.

The SaM146 completed its certification tests in 2010 entering commercial operation as part of the Sukhoi Superjet 100 airliner in 2011. Today, the SaM146 powers international operators’ aircraft both in Russia and overseas, specifically in Mexico, Ireland, Thailand (Royal Air Force) and in Kazakhstan.

“The SaM146 engine and the Sukhoi Superjet 100 are available both in and outside Russia, says SaM146 program manager at UEC – Saturn Mikhail Berdennikov. The operational experience of our engines is extremely successful in a broad range of climatic conditions, whether it be Mexico, where it is hot and high, or Yakutia, where it is cold. The engine provides excellent flight performance everywhere. The power plant has a dispatch reliability of 99.9%, which meets the best-in-class standards. At present, we have four certified variants of the SaM146: 1S17 – a baseline version; 1S18 – an improved thrust version; and two more variants – 1S17С and 1S18С – corporate aircraft versions.”

To uphold the world class quality standards, two SaM146 spare part distribution centers have been set up in Lytkarino, outside Moscow, and in Villaroche, France. Locating the warehouses in this manner enables the delivery of spare parts virtually anywhere around the globe in 24 hours. There are two training facilities for airlines’ technical personnel and two customer support repair centers in Russia and France. A round-the-clock customer service web-portal has also been introduced.

The engine design allows a flexible after-sales service, remarks Mikhail Berdennikov. It can be quickly removed from the wing. The engine is suitably accessible. It makes an easy job of replacing components when it is in line maintenance.

The SaM146 has a modular design and in keeping with the maintenance status concept it obviates the need for complete disassembly if parts need to be replaced or repair work needs to be carried out on one of its units. As for passenger comfort and applicable environmental considerations, it should be noted that the SaM146 engine fulfills relevant international standards. The engine runs quietly making it feel comfortable inside.”