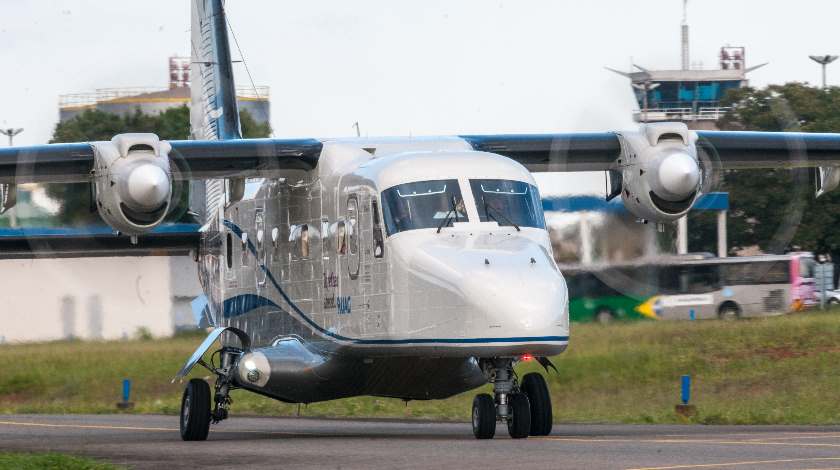 The RUAG Aviation Dornier 228 demonstrator returned to its home base at Oberpfaffenhofen, Germany, on 12 April 2016, following the successful completion of its month-long, premier Latin America Demo Tour. The demonstrator logged over 20’285 NM between 29 February and 10 April to provide institutions, government and armed forces officials, business executives and other interested parties with the opportunity to experience the Dornier 228 first hand. Throughout the course of the tour, the Dornier 228 visited over 17 cities in 9 countries and registered over 850 visitors.

Carlos Salamanca, Regional Sales Manager Dornier 228, RUAG Aviation, clarifies the Latin America Demo Tour objectives: “We provided our guests with a very hands-on experience with the Dornier 228. This was the prime opportunity to judge the Dornier 228, its capabilities and its robust nature. The energy created by the actual aircraft at each venue was truly remarkable. Each guest remained impressed and absolutely convinced that the Dornier 228 delivered on every one of it promises. Speed, performance, versatility and exceptional value for money were confirmed.” Demonstration flights were made available at selected locations, fulfilling the requests of over 40 guests.

In fact, the Dornier 228’s reputation created momentum, producing crowds of key decision makers, as well as the curious, at just about every visit on the tour’s circuit. Renowned for versatility and outstanding performance, the unique capabilities available on this aircraft are in demand for the region’s challenging special missions, especially in maritime patrol, as well as passenger and cargo operations. Connecting remote areas of the wide ranging countryside remains an ongoing topic across Latin America. Even more pressing is the rapidly growing demand for intensified maritime policing for the targeted prevention of illegal fishing and water pollution. The Dornier 228 is recognised as a reliable, high-endurance and cost-efficient solution for addressing these issues.

“The Dornier 228 Latin America Demo Tour proved an excellent opportunity to establish closer, collaborative relationships within the Latin American market. Decision makers provided us with a better understanding of the issues and concerns existing in the region, identifying just where and how the Dornier 228 proves itself a significant asset,” explains Fabian Kölliker, Product Manager Dornier 228, RUAG Aviation. “At the same time, RUAG Aviation confirmed its dedication to the region and substantiated our commitment to the now renewed serial production of the Dornier 228.”

In addition to the individual tour stops, decision makers and interested parties from the entire Latin American world were presented with the opportunity to see the Dornier 228 at The Caribbean Basin Coastal Surveillance & Maritime Security Summit (CABSEC) 2016, the South American Security Summit (SAMSEC) 2016 and at the International Air & Space Fair (FIDAE) 2016.