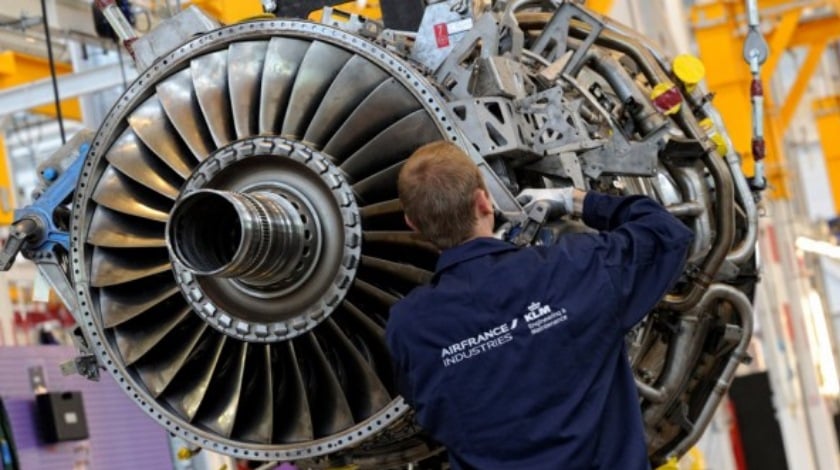 Today, at the Palais de l’Elysée in Paris, in the presence of the French President, Safran Aircraft Engines and Air France Industries KLM Engineering & Maintenance signed a Memorandum of Understanding concerning the creation of a joint company dedicated to the repair of aircraft engine compressor blades.

The new company’s business will specifically concern CFM56 engines from CFM International* (Airbus A320 and Boeing 737 families), the GE90 from General Electric (powering the Boeing 777) and the GP7200 from the Engine Alliance** (for the Airbus A380).

The two partners will invest over 20 million euros in the new company, which will be owned 51% by Safran Aircraft Engines and 49% by AIR FRANCE KLM; it is scheduled to start operations in late 2017.

The company will be based in France, at the Sars et Rosière business park in the community of La Porte du Hainaut (northern France). The new plant will cover 15,000 square meters, and offer all the machinery and equipment needed to repair engine parts, including high-tech metallurgical processes.

After reaching full production capacity in 2020, the company should have a total of 200 to 250 employees. It will apply innovative management methods, largely based on team creativity and employee empowerment.

“The creation of this joint venture marks a new phase in Safran’s long-standing relationship with Air France, » said Philippe Petitcolin, Chief Executive Officer of Safran. “Our shared ambition has driven the creation of a new high-tech company in France for a major international growth market. As two major players in French industry we are very proud of our contribution to onshoring this strategic business, which calls on highly-qualified employees. It’s also an excellent opportunity for Safran to bolster our position as a major player in the aircraft maintenance, repair and overhaul (MRO) sector.”

Alexandre de Juniac, Chairman and Chief Executive Officer of AIR FRANCE KLM, added: “I am delighted to see Safran and AIR FRANCE KLM, two industry leaders, pool their expertise to develop new skills and create over 200 jobs in France. With this project, AIR FRANCE KLM continues to invest in the development of our Engineering & Maintenance business, one of the world leaders in aircraft MRO. Through this new state-of-the-art unit, AFI KLM E&M will strengthen its technological expertise and increase the competitiveness of our services in a very demanding global market.”