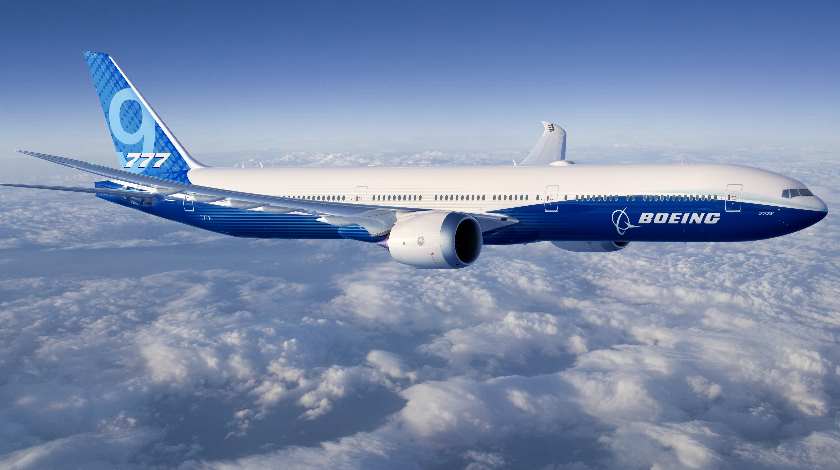 A record-breaking Boeing 777X jetliner is almost ready for long-awaited rollout which is expected to happen already this month, in February 2019. Last month Boeing revealed that world’s biggest engines, GE9X, were already installed under the wings of the first 777X test aircraft.

General Electric Aviation, a subsidiary of General Electric, initiated the development of GE9X in 2013 when it started to look for the ways to produce even a more efficient engine to power both variants of the new Boeing 777X, 777-8 and 777-9. GE9X is considered the fifth evolution of the legendary GE90.

Top Tech Specs of the Biggest Ever

So, what is the size of the world’s biggest engine? First of all, the GE9X is bigger than its predecessor. Even more, the new engine with a 134-inch (340 cm) diameter of the front fan is wider than the fuselage of the Boeing 737. Notably, aircraft engines, especially their fan and blades, is where the size matters. Why?

Primarily, the size of the engine is related to efficiency and noise. The larger the fan is the more air with less energy it draws (not to forget the weight, of course, the less it is the better). Why do larger fans contribute to the engine producing less noise? Because the airflow is distributed over the greater area.

Meanwhile wider fan, which includes 16 blades, allowed GE engineers to improve bypass ratio (the amount of air that passes through the fan and bypasses, or goes around the engine’s core rather than through it). Now the GE9X has a bypass ratio in excess of 10:1. In order words, in an engine with a bypass ratio of 10:1, for every 11 units of air drawn into the engine, 10 will bypass the engine core and 1 will go through it. What concerns pressure ratio, it could achieve 60:1.

For this reason, for the production of the GE9X ultra-lightweight ceramic matrix composite components were used. This material is also more heat resistant than metal alloys. Why is it important? The GE9X could reach record pressure ratio of 27:1 which contributes to considerably higher temperature of the air. It boosts efficiency but is tough on components. That is why ultra-lightweight materials with greater resistance to heat are extremely valuable development.

Biggest but Not Most Powerful?

With all the advancements, developments and improvements, the GE9X will not hold the title of the most powerful engine in the world. The GE9X produces a bit of less power than the GE90-115B (105,000 pounds of thrust compared to 115,000 pounds).

Nevertheless, it is vitally important to highlight that the GE9X is the quietest engine GE’s ever made (measured per pound of thrust).

The first key milestone in the development of GE9X was achieved in 2016 when the first engine to test (FETT) successfully completed the initial ground testing, during which the first GE9X engine accumulated 167 hours, 213 cycles and 89 starts.

This testing was aimed at collecting data on the engine’s aero and thermal characteristics, mechanical integrity, performance and operability.

The second key milestone came together with the second engine to test (SETT) in 2017. Also, the production of the production-configured engine marked the beginning the certification program.

Another significant milestone was passed in 2018, when the engine went airborne. The fourth test engine was tested on GE’s 747 flying testbed where it accumulated a total of 105 hours of flight time during 18 flights.

Now the engine is going towards the finalization of the certification process.