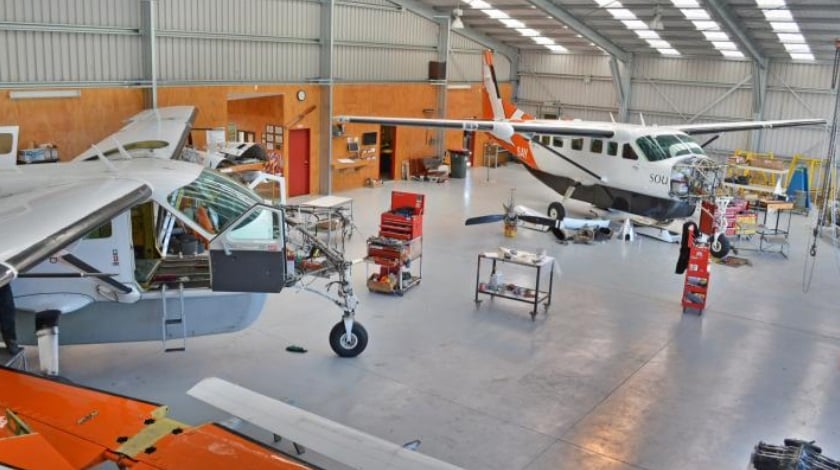 How the New Zealand operator transformed its maintenance operations–starting with eliminating the Excel spreadsheet.

One of the major benefits New Zealand-based Sounds Air has seen from becoming an early adopter of the Takeflite airline enterprise software suite is the dramatic improvement in capability the suite’s maintenance control module has given the carrier in managing its maintenance operations.

So says Andrew Crawford, managing director and majority owner of Sounds Air, which is based at the resort town of Picton in the scenic, winemaking region of Marlborough in the northeast part of New Zealand’s South Island.

Speaking at the recent Caribbean Aviation Meetup conference in Sint Maarten, Crawford said that for the first 17 years of its existence, from 1987 until 2005, Sounds Air handled all its bookings by means of an Excel spreadsheet and passengers could only book tickets outside normal business hours by leaving a message on Sounds Air’s answering machine with their credit card details.

Having bought a majority share in the airline in 2003, at which point it was carrying just 14,000 passengers a year, Crawford realized a more sophisticated IT infrastructure could help Sounds Air grow its bookings–and the rest of its business.

It so happened that a local IT expert, a director of Takeflite Solutions, the developer of the Takeflite suite, was a frequent passenger on Sounds Air. This familiarity provided a natural entrée for Crawford and Takeflite to discuss having the young company develop a reservation system specifically for the airline.

Its new reservations system immediately began transforming Sounds Air’s business and Crawford describes Takeflite’s IT suite as “an airline in a box.” By 2008, when the carrier launched its own website to allow 24/7/365 online booking, Crawford, who saw so much benefit for Sounds Air in Takeflite’s IT products that he became an investor in the company, decided also to have Takeflite develop a maintenance control IT suite for the carrier.

“Previously, we had outsourced our maintenance–we had no control of it and every bill was like a hand grenade” in its potential for being financially hurtful, says Crawford. In not having control of when and exactly how much maintenance work was being performed on its Pilatus PC-12 and Cessna Caravan aircraft and engines, Sounds Air had no idea how large any given maintenance invoice was going to be.

Nor could it schedule maintenance reliably. As with its previous reservations system, Sounds Air’s only means of providing any control of its maintenance scheduling was to use an Excel spreadsheet format. This didn’t allow the airline’s managers to drag and drop flights to rearrange the utilization of each aircraft in its fleet, so the system provided “little flexibility for change” and rearranging an aircraft scheduling took a week on average, according to Crawford.

“Now we can do it in 1.5-hours,” he says. “The solution was to build a system off the same [Takeflite] operations database,” which by 2008 was running Sounds Air’s entire ticketing, baggage control and reservations functions.

Its new maintenance control system gave Sounds Air the ability to record and manage “the complete maintenance history of the aircraft,” adds Crawford. Today, Sounds Air’s maintenance philosophy is to “always have one aircraft on the ground,” so that it can constantly keep nine of the 10 aircraft flying on revenue scheduled and charter flights.

After adding its in-house maintenance control system, Sounds Air decided to take direct control of a large part of its aircraft maintenance by creating a subsidiary called Sounds Aero Maintenance to perform all the airframe maintenance required on the three Cessna 208B Grand Caravans and two Cessna 208 Caravans it operates.

“We’re talking to Pilatus about maintenance by the hour, because variable-price maintenance is very difficult [to manage] for a small business that is privately owned,” says Crawford.

After setting up its own maintenance operation, Sounds Air decided quickly not to handle its own engine overhauls. “We did one and it saved us $50,000, but it was a nightmare in terms of the stress it caused us,” says Crawford. Now, although each of Sounds Air’s PT6A-114 and PT6A-114A engines is overhauled to Pratt & Whitney Canada’s 8,000-hour life extension program standard, “we never get to 8,000 hours. At 7,300 hours we give them back to Pratt & Whitney Canada on its engine exchange program.”

In the past few years Sounds Air has added further Takeflite modules to manage additional aspects of its operations, such as cargo sales and global distribution system participation; and today Takeflite Solutions boasts more than 70 airline and MRO-industry clients worldwide.