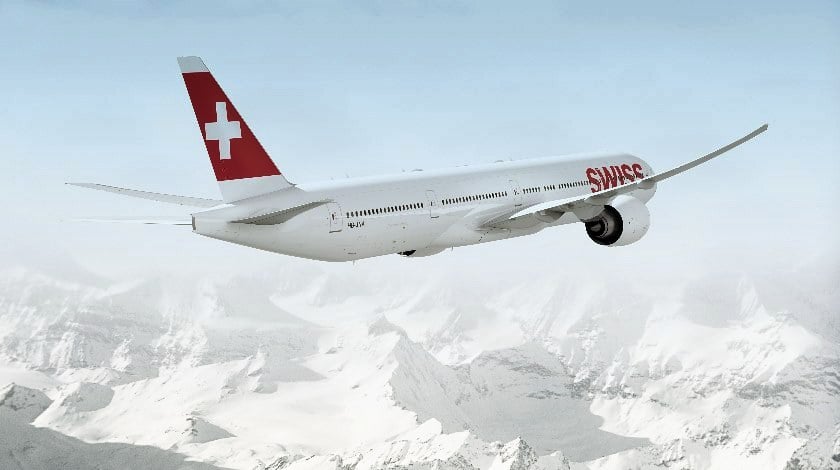 Swiss International Air Lines (SWISS) took delivery of the first of nine new Boeing 777-300ER aircraft on 29th January. The day also saw the opening of new SWISS First Class, Business Class and Senator Lounge facilities in Zurich Airport’s Terminal E. The two events usher in a new era for SWISS, in the air and on the ground, under its “Next-Generation Airline of Switzerland” strategy.

The first of the nine Boeing 777-300ERs which SWISS has ordered arrived at Zurich Airport on time following its delivery flight. The aircraft, which bears the registration HB-JNA, was welcomed with the loud applause of a large crowd of aviation fans and other keen spectators. The youngest – and biggest – member of the SWISS fleet was flown directly to Zurich from Boeing’s Everett Factory in the state of Washington in the USA. On board the flight, appropriately numbered LX 7771, were a delegation of the SWISS Management Board along with media representatives and further guests.

In the afternoon SWISS invited its top customers, politicians, representatives of the authorities, journalists and business partners to a first viewing of the new long-haul twinjet. In SWISS configuration the Boeing 777-300ER offers 340 seats: eight in First Class, 62 in Business Class and 270 in Economy Class. The totally newly-designed cabin interior of the new SWISS fleet flagship offers top comfort and visual appeal in all three classes.

Boeing 777 passengers will also enjoy wireless internet connectivity aloft, the first time this has been offered on SWISS flights. The new “SWISS Connect” internet option offers a choice of three data packages costing between CHF 9 and CHF 39 to meet customers’ varying internet needs. SWISS First travellers will be offered a 50MB package on each flight free of charge. As a further part of its new on-board internet facility, SWISS will also be offering an inflight phoning option (including SMS text messages and data transmission) using roaming technology for a trial one-year period.

SWISS’s new Boeing 777-300ERs will gradually enter revenue service from the start of the 2016 summer schedules. They will largely be deployed on services to Hong Kong, Bangkok, Los Angeles, San Francisco, São Paulo and Tel Aviv.

On the same day as the arrival of its first new Boeing 777-300ER, SWISS also unveiled a new dimension in lounge facilities at Zurich Airport. In a formal ceremony this morning the new First Class, Senator and Business Class Lounges in the airport’s Terminal E were officially opened.

Extending over more than 3,300 square metres and located conveniently close to its long-haul departure gates, the new lounges feature an innovative zonal concept for the comfort and convenience of SWISS’s premium guests: open areas in which to sit and simply enjoy the stay, working areas with secluded workplaces and rest zones equipped with specially-developed seating offering genuine relaxation.

The new lounges’ culinary highlights include “front cooking” areas where the chefs prepare selected fresh meals right in front of the guest, while the Senator Lounge boasts an exclusive Whisky Bar offering over 120 different whiskies. The SWISS First Lounge even features its own version of a five-star à la carte restaurant: whatever the time of day, guests can select the meal of their choice from an extensive menu.

All three lounges have access to a terrace with great views of the airport and the Swiss Alps beyond. And guests in the First Class Lounge can even enjoy a tasty fondue or raclette on the terrace in the winter months as they take in the spectacular vistas.