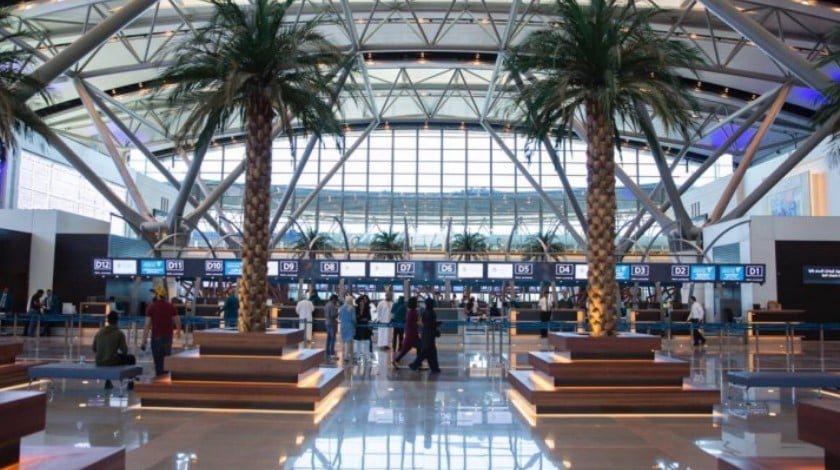 Opening Day, March 20, saw the first Oman Air flight depart at 3pm, with the first arrival touching down before 6pm. National airline, Oman Air, said it would be operating 200 flights a day from the facility.

OAMC, the Public Authority for Civil Aviation (PACA) and Oman Air officials had long recognised that the country’s prospects as a high-end tourism destination were being inadequately served by the existing terminal at Muscat – built decades ago and often involving passenger boarding at remote stands.

“Oman Air, the national airline for the Sultanate of Oman, is starting its operations from Muscat International Airport on March 20 2018, when all incoming and outgoing flights will be transferred from the current terminal to the new airport,” announced the international carrier.

An official video said the terminal housed several first and business-class lounges and would “efficiently accommodate” more than 20 million passengers a year, rising to 48 million in two further stages of development. Oman saw a total of around 17 million passengers in 2017.a

“The opening of the new Muscat International Airport has long been anticipated and is a momentous occasion in the sultanate’s history,” news reports quoted acting Oman Air chief executive, Abdulaziz Al-Raisi, as saying.

“As a major stakeholder, our strategy is to support the anticipated growth in tourism and logistics and we are stepping up investment. In 2018, we have already announced the arrival of new aircraft, routes to North Africa, Russia and Europe, and an expansion of existing services.”

The new terminal would allow Oman Air to offer a “thoroughly enhanced service”, it said. “Muscat International Airport has been designed to be a shining symbol of the modern state of Oman being built by His Majesty Sultan Qaboos bin Said. The hub will be a significant boost to Oman’s already flourishing travel sector as it will have the capacity to handle 12 million passengers per year and its runway will be able accommodate the world’s largest aircraft, the Airbus A380, and independent parallel operation.

“The airport also boasts a number of excellent facilities, including 6,000sqm of duty-free shopping, 96 check-in counters, 8,000 parking spaces and a 90-room airside hotel.”

Oman Air said in a press release that a new Boeing 787-9, its seventh Dreamliner, which joined the fleet on December 6, would be utilised on its’s European and Far-Eastern sectors. One more aircraft of the type is on order. The airline also said it recently ordered 30 Boeing 737 MAX aircraft, enabling a diverse range of configurations, and that it took delivery of the second such aircraft on March 11.

OAMC CEO, Sheikh Aiman Al Hosni, must take the credit for the achievement in opening the new facility, even if an official video, which saw him gazing through a window at the airport’s impressive exterior, may have summed up his feelings about the project:

“What does it take to push through to the finish line when the inches become miles and the miles an eternity?”

As a troupe of Omani pipers and drummers worked their way through the atrium, he beamed and laughed, giving the thumbs up to waiting television camera crews filming the opening ceremony.

Dubai International Airport (DXB) became the world’s busiest international airport in 2015, while Abu Dhabi Airport’s iconic ‘X-shaped’ Midfield Terminal Building will set new standards for design and execution when it opens this year; Qatar’s Hamad International Airport at Doha is the last word in luxury and sophistication, handling 120 million passengers since opening in 2014.

“Muscat Airport’s new terminal will be 345,000sqm, have 45 boarding gates, 29 remote stands, and will have a capacity for 20 million passengers per year, with the potential for that to eventually be increased to 48 million. Hopefully this means that a majority of flights will now leave from gates rather than remote stands,” Ben Schlappig, author of renowned airline industry blog One Mile at a Time’ wrote of the new facility.

“I can’t wait to check out the new terminal, and especially to see what Oman Air’s new lounges are like. The airline already has quite a nice lounge in the old terminal and I imagine the new one will be even nicer.”

Oman Airports is owned by the Government of the Sultanate of Oman, and is responsible for the management and operation of Muscat International and Salalah Airports and for the future new airports at Duqm, Sohar and Ras Al Hadd.

Omanis are notoriously prickly about matters to do with domestic administration. The case of the new passenger terminal building at Muscat Airport was a particular case in point. The opening prompted an outpouring of Omani pride, perhaps in direct proportion to the embarrassment felt in recent years at developer difficulties over contractor payments due to the collapse in oil prices, and technical faults Omani airport officials said needed rectification during the build-out.

Oman’s official TV channel carried a three-and-a-half-hour live broadcast to mark the opening of the new complex. Presenters were keen to stress that the project symbolised a ‘new airport’ for Muscat, rather than simply a new passenger terminal building.

OAMC’s operational readiness, activation and transition (ORAT) team had been preparing for the opening for months. The first test flight, Oman Air WY2001, took off on December 23 last year.

The ORAT team, in coordination with consultants from Munich Airport, said it organised 35 advanced tests with more than 17,000 community volunteers, using a variety of scenarios. The tests were held on a weekly basis every Wednesday in December and every Monday and Wednesday starting from January 2018 until the official operation of the new terminal commenced.

Former Oman Air CEO, Paul Gregorowitsch, gave an insight into the delays that dogged the new Muscat Terminal project at the Arabian Travel Market in Dubai last year. Design, IT and security problems all played a role in holding the project back, quite apart from payment difficulties.

“Let me take an example. If you start testing your IT systems and you find your IT cables next to your high-powered electricity [network], that could cause problems. To ensure entry into service, some parts of the building had to be redone. That’s one,” he said.

“The second part is that security and fire alarms should be state-of-the-art. So, when you start testing them at the airport, [sometimes there are problems]. Either the distances are not correct, or they are not activating properly. Those types of steps are made.

“Of course, you can get a design from an architect, and you think it will work without a problem. The reality is that there can be delays at every airport. Berlin is a good case in point,” he said.

With the opening of the new airport, Oman finally has a gateway commensurate with its undoubted tourist riches. Travellers to Muscat’s Burr Al Jissah resort, the Chedi Muscat or the Al Bustan Palace Hotel, will get their holidays off on the right foot. Whether visiting the Sultan Qaboos Grand Mosque, the Royal Opera House Muscat or the green mountains around Nizwa, the warmth of the traditional Omani welcome will only be accentuated by this new tour de force.

Sheikh Aiman will take a sense of quiet satisfaction as Oman moves into its place in the sun. He mused: “What does it take to create something that everyone is proud of when the odds are stacked against you and nobody thought it was possible?”