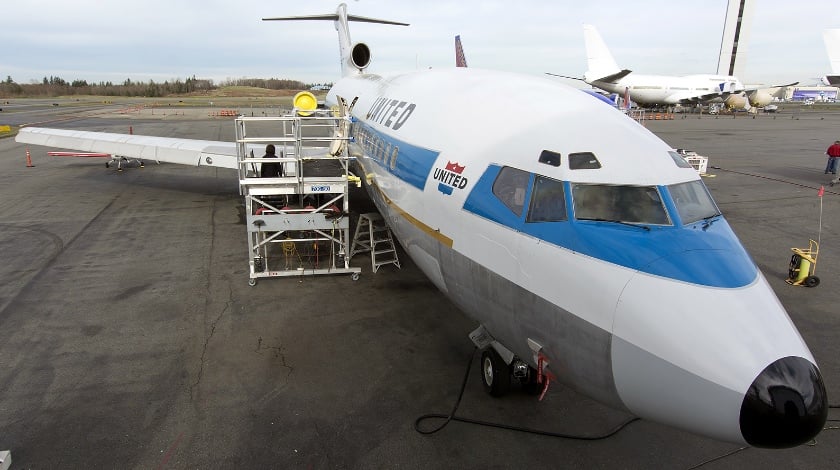 As the Museum of Flight made the final flight of the first ever built Boeing 727 from its Restoration Center down to the actual museum, we look back at the history of the Boeing 727 program.

This specific aircraft, N7001U, has spent the past 25 years at the Museum of Flight Restoration Center up at Paine Field in Everett. This prototype 727 was the first of 1,832 made when production ended in 1984 with a final delivery to FedEx. Until the 737 broke its record in the early 1990s, the 727 held the sales record for the most popular jet airliner ever built.

Unlike many Boeing test aircraft, this 727-22 was delivered to United Airlines (UAL) and entered commercial service on October 7, 1963. It flew mainline routes with United until January 13, 1991 when it served its last commercial flight from San Francisco to Seattle and it was donated to the museum. Prior to the handover, it was repainted in its delivery colors. It flew 64,495 hours with 48,060 landings, and it is estimated that it transported approximately 3 million passengers during its commercial service.

The restoration team was led by former Boeing engineer Bob Bogash who was in-charge of the restoration of this aircraft. FedEx, which donated a Boeing 727 in 2004 as spares source, worked together with Aviation Technical Services and the Museum of Flight to get N7001U to life for a last time. In total, $500,000 has been invested to restore the aircraft, along with millions of dollars’ worth in labor cost donated by dozens of volunteers who put their lives on hold to get the aircraft back airworthy.

With a special flight permit, and a crew of three led by Captain Tim Powell, the 727 will be flown directly to the Museum at Boeing Field, where it will be on display next to the first 737 and 747, along with one of the 787 test aircraft and a 707. The pavilion is expected to open this, summer with all of the aircraft now protected from the elements of the Pacific Northwest Weather.

Looking Back at the Boeing 727

The Boeing 727 is a mid-size narrow-body that followed the 707 in Boeing production history. It first flew in 1963 and had a production life of 21 years, during which 1,832 of them were produced and delivered to many airlines worldwide. At the time the 727 filled the same role that the 737 does today, dominating the domestic route network along with being used on short and mid-haul international routes.

Three airlines worked together with Boeing to help produce the type, at the time United Airlines wanted a four-engine aircraft to help with high-altitude airports, while American wanted a twin-engine aircraft for fuel efficiency and Eastern Airlines wanted three to avoid the twin-engine 60-minute ETOPS regulation so that they could operate the aircraft overwater to the Caribbean. The three airlines eventually agreed to a trijet and the 727 was born.

On a cold November morning in 1962, the first Boeing 727 rolled out of Renton Factory wearing a mustard colored scheme with red cheat line. It was the first and only Boeing trijet ever produced with the T-Tail. It would take just four months to get the aircraft ready for its first flight when it took off on February 9th, 1963 and it was delivered one year later to Eastern Airlines.

Unlike its future sister, the 737, the 727 was only produced in two types, the 727-100 and 727-200, and used the same engines for both. While many variants of combi and cargo versions were to come in the aircraft’s lifetime, it would only have those two variants.

At the start of the 21st century, the 727 faced higher fuel and operational costs, combined with the post 9/11 economic scenario and noise restrictions led airlines to phase out their 727s. By 2003, as all U.S. major airlines retired the type, the number of 727s in service began to dwindle. Today, here are still a few 727s in service today, mostly serving as freighters and a handful as VIP transport. Interestingly, one of the last operators was the Justice Prisoner and Alien Transportation System (JPATS), which used four 727s to transport persons in legal custody between detaining centers and other places to where they should be transported.