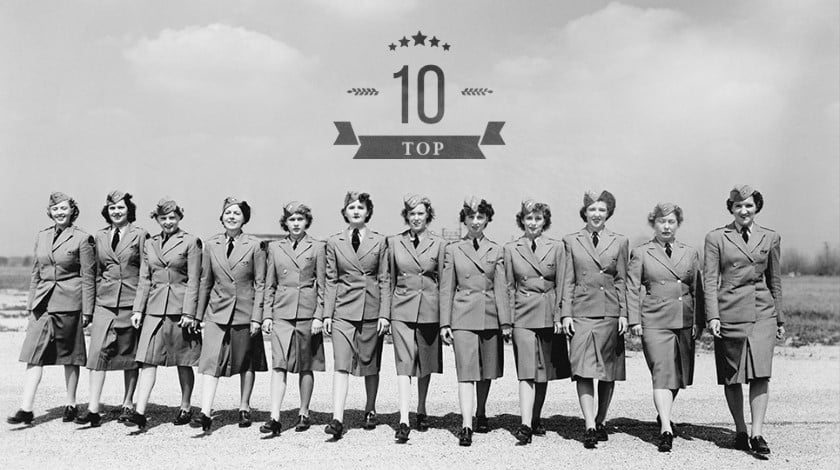 Being a flight attendant is not an easy task – you need to go through weeks of training and you will have the responsibility of guiding every passenger on board if an emergency situation ever happens. In a long line of flight attendants, quite a few showed bravery, strength and uniqueness.

We would like to present a list of top ten cabin crew members who stood out in history.

He was the world’s first flight attendant. Yes – he. And not only he was a male cabin crew, he cared for passengers not on a plane, as one might think, but a zeppelin. He started his career in 1912, working for a German airline DELAG on a zeppelin named Schwaben. He even worked on the infamous zeppelin – Hindenburg.

When Hindenburg burst into flames, Kubis, once the zeppelin was close enough to the ground, helped the passengers to jump to safety before jumping out of it himself.

Ellen Church was the first female flight attendant who started her career in the 1930s. In fact – she was a pilot too.

Unfortunately, back then, airlines were not interested in hiring women.

Or any job aboard a plane. So Church, also being a registered nurse, promoted the idea that women nurses would handle tasks that the co-pilots used to do – hauling luggage, handing out lunches and helping passengers. Who else if not a nurse would make you feel the safest mid-flight? This idea proved to work wonderfull and soon enough airlines started hiring women to work as air hostesses.

Edith Lauterbach worked as an air hostess in 1944 and was the first out of many to start the fight for the rights of women in the aviation world. Together with three other women, she founded the Air Line Stewardesses Association – the ancestor of today’s Association of Flight Attendants-CWA, the aviation industry’s main union for in-flight service workers. Thanks to Lauterbach and her colleagues, sexist work rules ceased existing and a flight attendants’ pay doubled throughout the years.

Ruth Carol Taylor was the first African-American flight attendant in the United States who started her career in 1957. Wanting to break the colour barrier, she applied to work as a flight attendant for Trans World Airline. She was rejected for her race, but she did not let her hands down and soon got the job at Mohawk Airlines. Taylor spent much of her career and life as an activist for the minority of women’s rights.

Momi Gul Durrani was one of Pakistan International Airlines’ cabin crew members in the 1950s and 1960s. She had facial features suited for the camera and for such reason, PIA showed Durrani in many of their advertisements. The most famous saying about her was “when she smiled, she made others smile”. Soon she gained popularity as a kind and beautiful stewardess. Sadly, she was on duty aboard PIA Boeing 720B jetliner which crashed near Cairo Airport. Durrani died together with the 114 people on board.

Neerja Bhanot was a senior flight attendant on Pan Am Airlines. On the 5th September, 1986, Bhanot died only at the age of 23 in a hijacking of the aircraft. But she died a hero. As a senior cabin crew, she took charge of the plane and its passengers, shielding them from the terrorists that had boarded Pan Am Flight 73 flying from Mumbai to New York. After 17 hours, terrorists opened fire and set off explosives. Bhanot opened the doors and helped the passengers escape, not running to safety herself. She died shielding three children from bullets.

One of the passengers, then a seven-year-old, is now a captain with a major airline and has stated that Bhanot was his inspiration and he owes her his life.

Ulrike Patzelt, or Uli Derickson (after marriage), was a German-American flight attendant who is known for her courage protecting 152 passengers and crew members during a hijacking of TWA Flight 847 that happened in 1985. With her calm demeanor and the help of German language, she was able to speak and negotiate with the Lebanese terrorists. She shielded anyone who they tried to hurt and fought for other passengers’ safety. After many negotiations and political moves, the hijackers released them after fifteen days. Every passenger on that flight is thankful for Patzelt’s brave acts.

In 1968, Barbara Jane Harrison gave up her life to save the passengers of a Boeing 707-465 belonging to Intercontinental for British Overseas Airways Corporation. The aircraft took off, but within 20 seconds one of the jet engines burst into flames. Three minutes later, the plane landed and the cabin crew started the evacuation procedures.

Barbara was one of the brave flight attendants, that instead of jumping to safety came back into the flames to save a disabled man.

Sadly, she died in the fire, but for her bravery, Queen Elizabeth II awarded her a George Cross, Britain’s highest award for civilian bravery.

Vesna Vulovic was the sole survivor of the DC-9 plane of Yugoslavian airlines. Yugoslavia was then torn by war, and a fascist group planted a bomb in the aircraft Vulovic boarded. While flying through the city of Srbska-Kamenice, the explosive detonated. The D-9 was torn to pieces and crashed into a mountainside. All 28 passengers died that day, but miraculously, Vulovic survived. She is considered to be one of the luckiest people alive, and despite the horrific crash, after she regained her health, she continued working for airlines, proud to be part of cabin crew.

Johanna Sigurdardottir is a known former politician and Prime Minister of Iceland. But before that she started her career as a flight attendant for Iceland’s main airline (before Iceland Air) Loftleidir.

She is not only the first female Prime Minister in the world, but also the first openly gay head of government as well. A professional leader and a brave activist – the strong traits cabin crew are known to have.