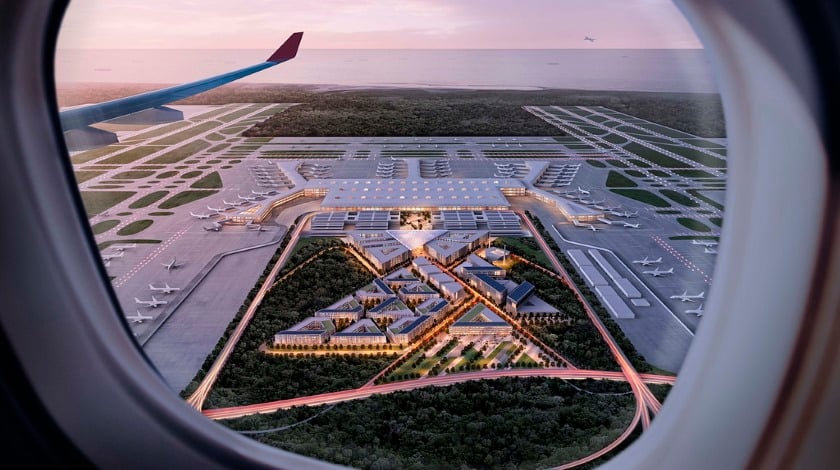 Turkey’s aviation sector, which grew by 14 percent over the past decade, is expected to grow even further once the Istanbul Third Airport becomes operational.

The airport, set to open Oct. 29, 2018, is expected to be the largest airport in the world when completed in 2023 and will serve as Turkey’s primary airport and a hub for connecting flights between Europe and Asia.

The airport will serve 90 million passengers annually once the first stage of the project is completed in the first half of 2018.

Last month, Transport, Maritime Affairs, and Communications Minister Ahmet Arslan announced the number of employees working on construction of Istanbul New Airport reached 30,000, while 57 percent of the project was complete.

He added that they were aiming to reach 35,000 employees soon and estimated that direct and indirect employment would rise to 225,000 once the airport is completed.

The airport is expected to provide opportunities for flights to more than 350 destinations for nearly 100 airline companies. According to the best-case scenario, as of 2025, 120 million passengers, including 35.5 million domestic and 84.9 million international fliers, will be served in and out of the airport.

Arslan previously said that Istanbul New Airport, currently under construction, will contribute greatly to the Turkish economy and to employment rates, noting that it will make very serious contributions to trade and is expected to generate 4.9 percent for the gross domestic product (GDP), with an additional $79 billion obtained just through the airport.

The minister added that Turkey’s aviation sector has made great advances due to the emphasis placed on aviation by the Justice and Development Party (AK Party), asserting that the liberalization of the sector allowed it to expand and pointed to President Recep Tayyip Erdoğan and Prime Minister Binali Yıldırım’s instructions to make airlines the way of the people.