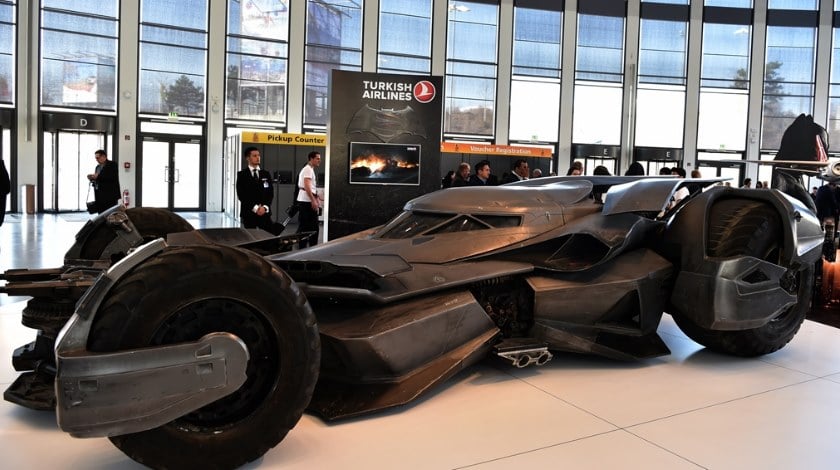 Turkish Cargo has served as a ‘Super Hero’ for the first time transporting the Batmobile around the globe as part of the Batman v Superman: Dawn of Justice movie.

Turkish Airlines added Metropolis and Gotham City to its flight line, moving the Batmobile from the US to London on an intercontinental cargo flight.

Turkish Cargo became the official air transport carrier of the Batmobile as part of Turkish Airlines’ partnership with the film and will carry it to launch events of the movie at various locations.

The first stop of the Batmobile’s journey with Turkish Cargo was London. The operation was conducted as a part of the car’s promotional European Tour. Having started from New York’s John F. Kennedy International Airport, the Batmobile first landed in Istanbul, later continued its way to London with a transit flight.

Turkish Cargo says: “Although there were no visible technical problems for the transportation of the car, Turkish Cargo’s US team nonetheless showed the utmost attention to the operation with a “zero-error” approach and performed a load testing.”

Three weeks before the vehicle was scheduled to depart, a model container was prepared and carried by Turkish Airlines Flight TK6557.

The carrier adds: “Taking all the precautions for the transport, the Turkish Cargo team adjusted all other cargo shipments that were scheduled to be on the same flight as the Batmobile. The planning of this shipment, which weighed approximately 30 tonnes, required a zero error margin both at the departure and arrival points.”

“The teams coordinated on both ends to quickly and accurately complete the necessary preparations for carrying this invaluable cargo without a single mistake and to the complete satisfaction of the studio and car manufacturer.”

When the date of transport was announced as 12 February, the manufacturer of the car, the container manufacturer, the cargo operations agency and producer Warner Bros. started work in cooperation to finalise the operation.

The Batmobile was prepared for transport in accordance with Turkish Cargo’s instructions for the shipment to the warehouse at JFK International Airport on 11 February.

After the necessary checks were made, the Batmobile was accepted. Later, it was loaded onto the aircraft bound for Istanbul, with its first stop scheduled for London.