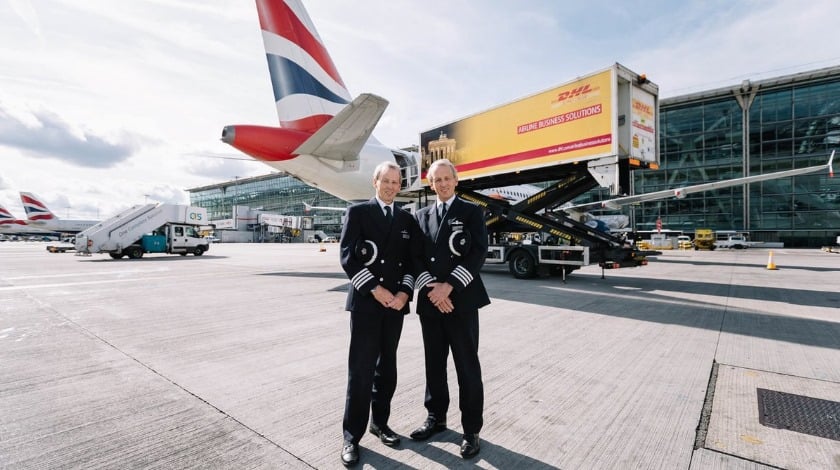 Twin brothers who work as British Airways pilots celebrated their 60th birthdays by walking off their last ever flights, only 30 seconds apart.

Captains Jeremy and Nick Hart both fly A320 aircraft on short-haul routes for British Airways. After being born 30 minutes apart they decided a fitting end to their flying careers would be to operate their last flights back into Heathrow on the same day, parking up their aircraft next to each other, only 30 seconds apart.

Between them, they have clocked up almost 45,000 flying hours, spent 3.5 years in the air and flown more than two million customers. Strictly speaking the twins are not identical, but look and sound so similar that they are often mistaken for one another.

Nick said: “Years ago Jerry never mentioned to his colleagues at British Airways that he had a twin brother who flew for British Midland, and one day a British Airways pilot strode over to me at Heathrow and asked what on earth I thought I was doing dressing up in a British Midland uniform. It took a bit of explaining to convince him that I wasn’t Jerry!”

And since Nick joined British Airways, Jeremy has had some interesting experiences: “I’ve been constantly mistaken for Nick, and on one occasion I was called Nick the whole flight by my co-pilot. I’ve even been kissed by colleagues who think they know me. I guess it’s not a bad reaction!”

The twins became interested in flying at an early age and always knew they wanted to become pilots. Their father was an English lecturer who regularly took teaching jobs around the world, so the pair grew up moving every few years and spent much of their childhood on flights to and from the Middle East and Europe.

In those days of fewer security restrictions they were often allowed to sit at the back of the flight deck behind the Captain and First Officer. They both gained their private pilots’ licences before being offered places to train for their commercial licence with Britannia Airways.

Jeremy took the offer from Britannia, moving to British Airways a few years later in 1987, but Nick turned it down to train with British Airways. Unfortunately, the course was cancelled, and Nick decided to go to university to study engineering.

But he never lost the yearning to fly, so re-mortgaged his house to pay for flight training.

Once qualified he worked for Manx Airlines in the Isle of Man before moving to British Midland and eventually British Airways. Despite working for the same airline, Nick and Jeremy have never flown together. Because both are Captains, and commanders of an aircraft, they have never been assigned to the same flight.

James Basnett, British Airways’ head Airbus pilot paid tribute to the pair after their more than 60 years flying, saying: “ I also have a brother on the Airbus and thought that was pretty unusual but Nick and Jerry have swept the floor with us. They arrived in the world 30 mins apart, flew the same aircraft in the same airline, and then departed in the same manner that they arrived. Minutes apart. A fitting finale to long and impressive careers and I know that they will be sorely missed on the fleet. We wish them the very best in their joint retirement.”