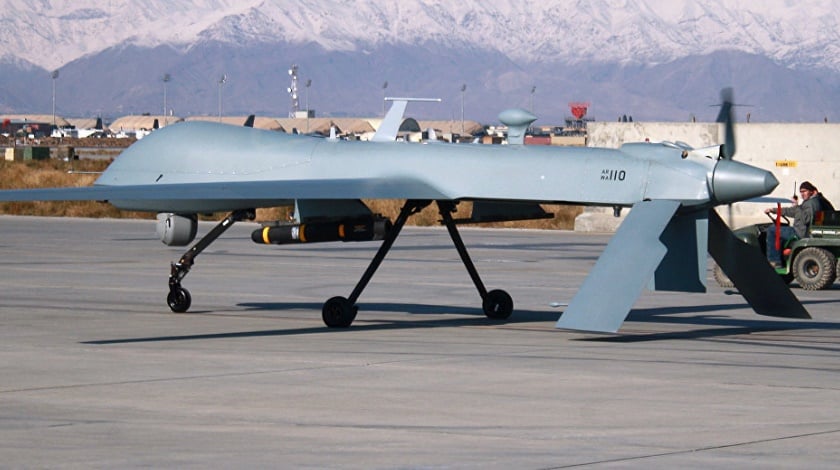 These specialized birds can race through the clouds nearly 2 miles above their area of operation and still deliver video imagery in real time, day or night; a critical and potential game changer for troops on the ground. When emergencies happen the entire team, crew chiefs, maintainers, and operators have a hand in the successful outcome and take equal pride.

Army Spc. ‘Blake’ Hopkins, from Waco, Texas, a ‘Shadow’ operator (flyer) described his experience with a unit receiving contact and watching the enemy trying to use a vehicle born improvised explosive device, “We were able to quickly let the friendly forces know. They had time to get clear and move their vehicles out of the way. Because we could see and communicate, there was minimal damage and no one was hurt. I feel glad when we (the team) are the ones responsible for helping,” he said.

Over the past six months the Soldiers have worked 12-hour shifts flown countless missions and each mission has left them knowing they have made a difference.

Army Staff Sgt. Paul Boyer, Corpus Christi, Texas, has been an operator (flyer) for just over six years and says he still gets excited when he gets into the action, “I love what I do and what we are able to do- but what keeps it interesting is the different missions from day to day,” he said. The birds can carry out a multitude of missions while aloft for nine hours such as overwatch, surveillance, target acquisitions and route reconnaissance.

The long shifts can get monotonous, no change in scenery, in the small (36 square foot) control section but Boyer says it is not a thankless job, “every day someone from the team on the ground is praising us and thanking us-it is all worth it.”

The operators control the plane’s flight and cameras only after the initial launch, which is the crew chief’s responsibility along with all of the maintenance. The aircraft weighs just over 400 pounds is 14 feet long and has a 20-foot wingspan but make no mistake; these remote controlled aircraft are as demanding on the maintainers (crew chiefs) as their gigantic manned counterparts.

The aircraft require a 500-hour inspection that more closely resembles disassembly because every nut, bolt, screw, wiring assembly, even the engine comes out according the maintainers.

Army Cpl. Colyn Eure, from Roanoke Rapids, North Carolina, on his first deployment says, “I take a lot of pride in being a maintainer, the operators steal the spotlight a lot because they are the ones flying – but we (crew chiefs/maintainers) know if it wasn’t for us, the bird would never get off the launcher,” he said.

Launching and landing the bird offer the most potential for disaster. To put it into perspective, during the launch, from a catapult style launching system, the ‘Shadow’ is going 80 mph, 20-mph faster than a hummingbird.

The landing is very similar to fighter jets landing on an aircraft carrier; an arresting wire catches a hook dangling from the belly of the plane. A typical launch can take up to 45 minutes, with preflight and clearances from control. In an emergency where troops are receiving enemy contact, they can be in the air in less than 20 minutes.

The “Starfighters” as the platoon is called, work in close quarters and have handled some intense situations; for many of them this is their first deployment. With only a few months left in theater they are staying focused on the mission, Eure explains how he tries to keep what he considers as the platoon’s motto in mind, “it is not how you start, it is how you finish,” to ward off any complacency, he said.
UAVs have flown more than 750,000 combat hours since 2012 in support of operations in Iraq and Afghanistan. The Shadow is an aerial asset that delivers more safety for troops on the ground and solid job satisfaction for the Soldiers of the TUAS.