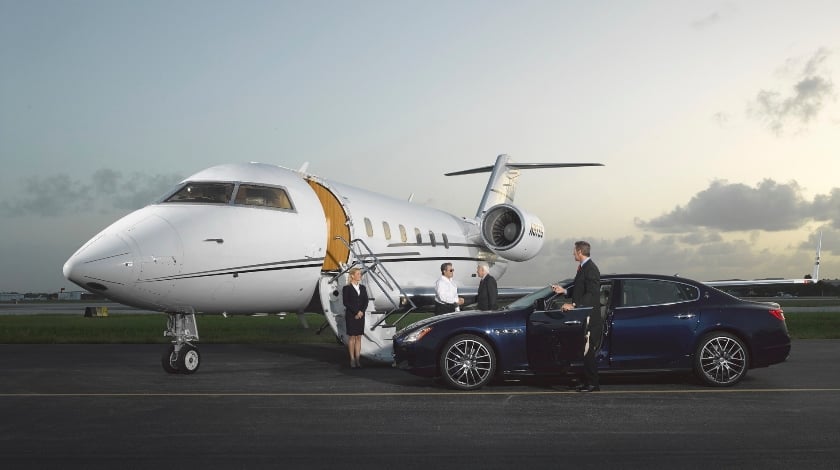 Private air travel is getting the Uber treatment with some of the industry’s biggest customers – members of the Saudi Royal family – investing $26.1 million in a company that lets users book private jets from a smartphone.

Most private aircraft aren’t used that much, JetSmarter founder Sergey Petrossov, a Russian-born Florida resident, said in an interview. They either stand idled at airports or are flying empty on route to pick up clients from a certain location. Those empty seats and flights can be offered to travelers for less than the typical price of chartering a jet and for a fee that may be at least in the same ballpark as the cost of a first class ticket.

“We thought if we offered that excessive supply to the business-class passengers of regular airlines, it would be a great disruptive service,” Petrossov said.

The 27-year-old likens JetSmarter’s offering to Uber Black, the private black car version of Uber Technologies Inc.’s ride-hailing service that might take you from A to B in a Mercedes S-Class, a Cadillac XTS or some other high-end luxury sedan. JetSmarter, which counts Jay-Z, the rapper whose real name is Shawn Carter, as an investor, plans to expand operations in the Middle East, Asia and Europe with the new funding. The Saudi Royal Family also took part in a previous, $20 million financing round, in July.

Petrossov got the idea when he was trying to reserve his own private charter in 2009. Forms had to be filled out and faxed off to make a booking. Starting as a simpler way to hire a plane, JetSmarter has expanded to buying excess capacity from owners, selling seats on empty flights and organizing shuttle schedules for popular routes such as New York to Miami.

JetSmarter offers space on flights that would otherwise leave empty and on last-minute deals without charge to members that have paid an annual fee of $9,000.

The company will offer shuttle flights in Europe on routes including London-Paris and Paris-Geneva starting April after organizing flights between Riyadh in Saudi Arabia and Dubai in the United Arab Emirates in December. Petrossov plans to start services in Hong-Kong in April and in Moscow early next year, he said.

JetSmarter has 3,100 jets connected to its system. Its app has about 350,000 downloads and the company carried about 35,000 passengers last year with a 135 percent increase in memberships last quarter. With more customers to reduce the number of empty seats and planes, the costs will continue to fall, Petrossov predicts.