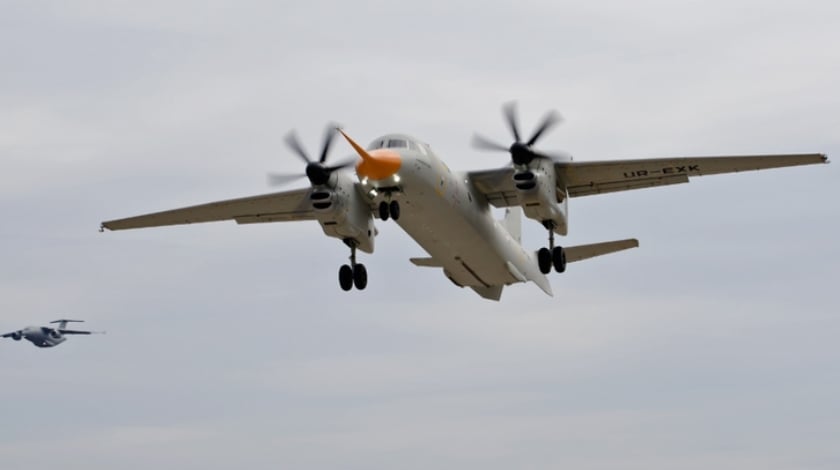 The first flying prototype of the Ukrainian Antonov An-132D cargo turboprop performed its maiden flight on March 30. The airplane took off from Svyatoshyn airfield in Kyiv, which is operated by state-owned airframer Antonov.

Following a series of maneuvers, the airplane landed at Gostomel, Antonov’s primary factory airfield some 20 km to the northwest of Svyatoshyn.

As reported earlier, the first prototype was originally supposed to be handed over to Saudi Arabia’s Abdulaziz City for Science and Technology (KACST) in the first quarter of 2017. KAST and another Saudi company, TAQNA Aeronautics, are Antonov’s partners on the An-132 project. It is understood that an An-132D assembly line may be set up in Saudi Arabia in the future.

The An-132D is an upgraded version of the An-32 turboprop with Honeywell avionics, Dowty Propellers airscrews, and an integrated air management system by Liebherr-Aerospace Toulouse. Like the Bombardier Q400 turboprop, the new Ukrainian aircraft will be powered by Pratt & Whitney Canada PW150A engines. Antonov says the An-132 will have a cruising airspeed of 500 km/h and a service ceiling of 9000 m. It is expected to have up to 9.2 tons of payload capacity.

Antonov announced plans to upgrade the An-32 in May 2015, and back then was looking to start production within two years of signing the contract with the Saudi partners (the contract was signed later in 2015). As earlier reported, potential Southeast Asia and Latin American customers have expressed an interest in the aircraft.