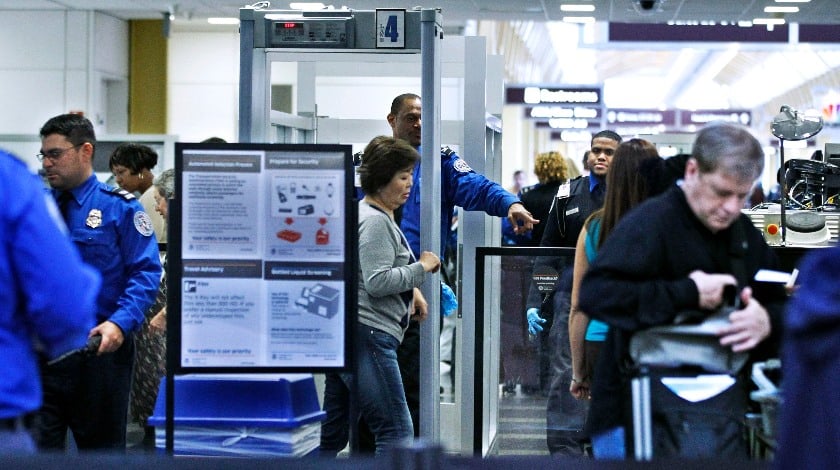 US authorities have secretly required airlines from 13 nations to forbid passengers from carrying any electronic or electrical device larger than a cellphone.

The new edict was distributed in an email described as “confidential” from the US transportation safety administration (TSA) on Monday.

The requirement forbids passengers from bringing laptops, iPads, Kindles and even cameras larger than mobile phones into the cabin. All such devices must be checked.

Saudi Arabia’s Saudia Airlines and Royal Jordanian airlines are among the affected countries; the full list has not been revealed to the affected airlines themselves.

The email – described as a “circular” – is not a public regulation, but airlines will be expected to enforce the new rule. Airlines were issued the circular on Monday and given 96 hours to comply; the rules apply to flights both to and from the US, according to Royal Jordanian airlines.

The circular does not address electronic flight bags (EFBs), which allow flight crews to display diagrams mapping flight patterns, maps of airports and other digital documentation, usually on an iPad.

The lack of specificity leaves airlines in the dark as to whether their employees will be cited or otherwise punished for performing the vital functions of aircraft crew as usual.

The TSA referred calls to the Department of Homeland Security (DHS). DHS would not confirm or deny existence of such a requirement: “We have no comment on potential security precautions, but will provide any update as appropriate,” David Lapan, spokesperson for DHS, said in an emailed statement to the Guardian Monday morning. Lapan declined to comment further.

By Monday afternoon, a US official had briefed Reuters that the ban followed a “terrorism threat” and was expected to be announced on Tuesday.

The official said no American carriers are impacted by the ban, which is expected to be unveiled on Tuesday by the Homeland Security Department.

Compliance has been swift: “Effective March 21st, the carriage of electronic and electrical devices inbound to the USA shall only be inbound in checked baggage except for mobile and medical devices,” according to a reservation agent at one of the affected airlines.

Royal Jordanian tweeted a reference to the restrictions, referring cryptically to “concerned US departments”. It was suggested that Royal Jordanian disobeyed the circular in part by making its existence known. The airline deleted the tweet on Monday afternoon after it had been up for several hours.

Here’s the now deleted message from @RoyalJordanian earlier today. Spokespersons for the airline have not responded to ABC News inquires. pic.twitter.com/xKo4ezJ8ov