US Grounds Osprey Fleet in Japan After Aircraft Crashes Off Okinawa 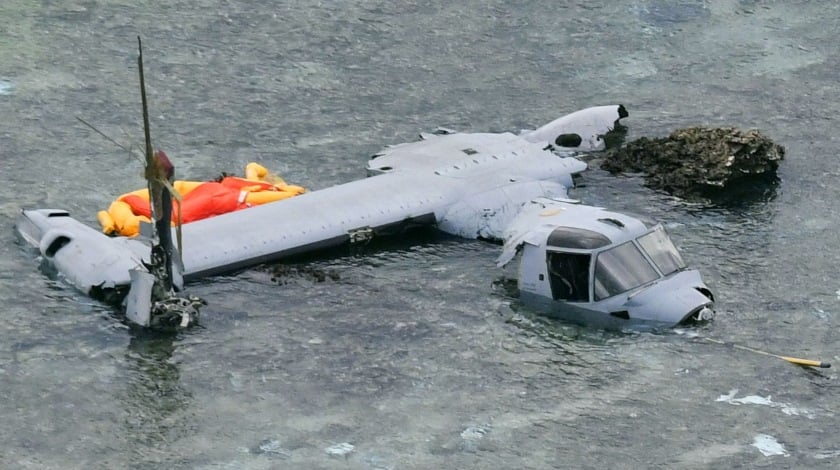 The US military has grounded its fleet of Osprey aircraft in Japan after one crash-landed in the sea near Okinawa, in an incident that will fuel further local anger over the US deployment on the island.

The Pentagon described the incident on Tuesday night as a “mishap” and said the tilt-rotor MV-22 Osprey had landed in shallow water 0.6 miles (1km) off the coast of Nago in northern Okinawa. Five crew members were injured.

But TV footage suggested it had been more serious, with the main wings of the transport aircraft broken in two and the half-submerged fuselage drifting in the sea.

The Osprey’s safety record has caused concern among Okinawans since they were deployed in 2012 at marine corps airbase Futenma. The failure to date to relocate the base to an offshore site near Nago has frustrated US plans to reduce its military footprint in the island.

Okinawa makes up less than 1% of Japan’s total area, but hosts three-quarters of US bases and more than half of the 47,000 US troops stationed in the country, a burden that has added to anti-base sentiment.

The governor of Okinawa, Takeshi Onaga, is leading a campaign to block Futenma’s move to an offshore location in the Henoko district of Nago. Instead, Onaga wants the base to be moved off the island altogether.

The incident will do little to allay fears that the Osprey is accident-prone. The aircraft has been involved in several fatal accidents in other countries, including one in Hawaii in May 2015 in which a crew member died. Kyodo News reported that a second Osprey had to conduct a belly-landing, in which a plane lands without its landing gear fully extended, at Futenma on Tuesday night.

The Japanese prime minister, Shinzo Abe, said the crash-landing in the sea was “regrettable” and “securing safety is a prerequisite” for the aircraft’s deployment in Japan.

Onaga described it as “outrageous”, while the mayor of Nago, Susumu Inamine, told public broadcaster NHK: “This is what we have feared might happen some day. We can never live safely here.”

Japan’s defence minister, Tomomi Inada, called for all Osprey flights to be suspended until safety assurances could be given. “It is deplorable that the accident occurred at a time when people in Okinawa and other areas in Japan are taking a considerable interest in the safety of the Osprey,” she said.

Later, the US military said the crash appeared to have been caused by an oil duct problem while the aircraft was being refuelled in the air.

US marines say Ospreys are vital to their ability to quickly move large numbers of troops and equipment to regional flashpoints, such as in response to an emergency in the South China Sea or East China Sea.

Each MV-22 Osprey can carry 24 combat-ready marines. The aircraft is able to take off like a helicopter, but has the speed and range of a turboprop plane.

The US has two Osprey squadrons in Japan, although military officials refuse to reveal the number of aircraft in operation. A squadron typically comprises between 12 and 24 aircraft.