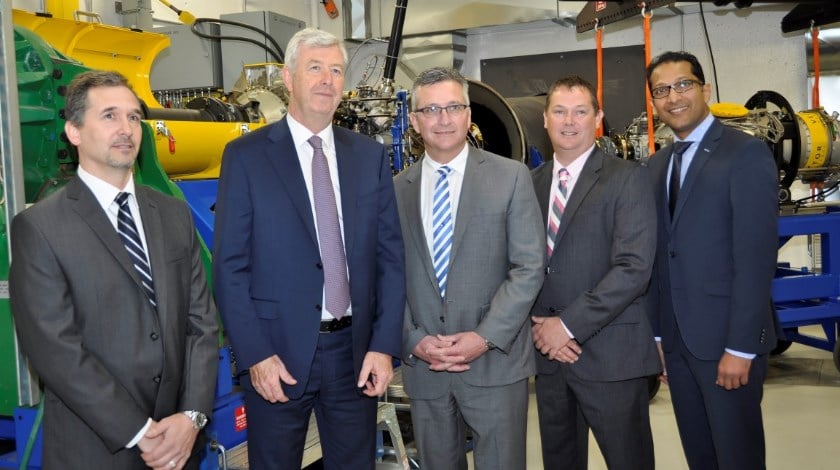 This new multimillion dollar test cell, which was the result of a financing partnership with provincial and federal governments, is capable of supporting turboprop engines producing up to 5,000 shaft horsepower. It joins three existing test stands at Summerside, two dedicated to turboprops and one to turbofans. The new cell will expand Vector’s local test capacity on turboprop models supported from the Summerside overhaul facility, such as the Pratt & Whitney Canada PT6A and PW100 series, thus minimizing turn-around times (TATs) for its customers globally and supporting further market share growth.

“The Government of Canada supports the continued growth and innovation of the aerospace industry across Canada. Companies like Vector Aerospace compete on a global scale, and their continued success means a stronger economy and good jobs here at home,” said the Honourable Navdeep Bains, Minister of Innovation, Science and Economic Development and Minister Responsible for the Atlantic Canada Opportunities Agency (ACOA).

“This is a great day for Vector and for the economy of Prince Edward Island. I’m proud that both ACOA and the Summerside Regional Development Corporation played roles in the creation of this facility, helping Vector to be the best at what they do, right here in Slemon Park,” said Bobby Morrissey, Member of Parliament for Egmont.

“Since starting in 1991 as an anchor tenant at Slemon Park with a dozen employees, Vector Aerospace has grown into the province’s second-largest private employer and the driving force behind our aerospace sector,” said the Honourable Heath MacDonald, Prince Edward Island Minister of Economic Development and Tourism. “This expansion will further enhance Vector’s sterling reputation around the world and help further the province’s commitment to developing our exports, growing our economy, and creating sustained prosperity for Islanders.”

“This new test cell will dovetail well with our existing test stands at our world-class Summerside facility,” said Jeff Poirier, President of Vector’s Engine Services – Atlantic division. “The addition of this computer-controlled test cell demonstrates our dedication to our customers around the world. This investment also reinforces our long-term commitment to the Summerside facility and our local workforce, as a major employer here on Prince Edward Island.”

The Summerside facility is celebrating its 25th anniversary this year. It has been providing world-class engine MRO services since 1991, and today employs over 450 skilled workers at the location.

Vector’s presence on PEI generates valuable revenue for the local economy through its workforce and supply chain, and the company also works closely with local higher education establishments, including Holland College and the University of Prince Edward Island.