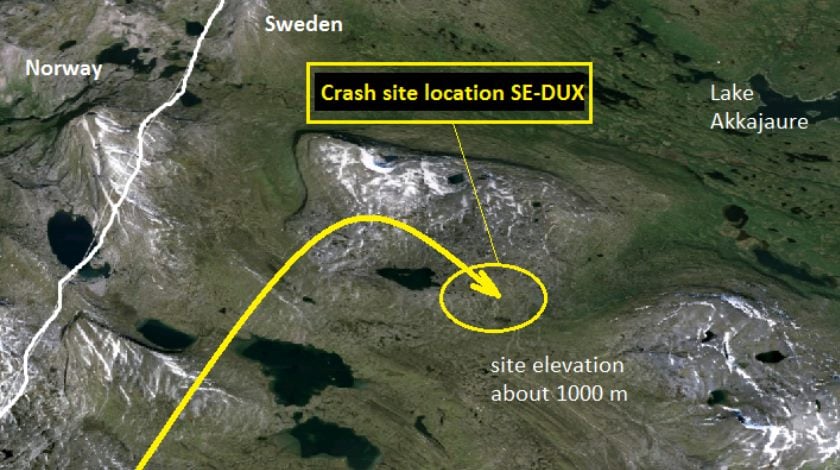 Swedish accident investigators have recovered the two flight recorders from the West Atlantic Bombardier CRJ200 freighter that crashed in Sweden near the Norwegian border in the early hours of Jan. 8, killing the two crew members.

The Gothenburg-based European mail and express freight carrier West Atlantic CRJ200PF, operating as flight PT294, was en route from Oslo to Tromso, Norway late on Jan. 7 when the pilots declared mayday and the aircraft disappeared from radar at 11:31 p.m. local time, just over 20 minutes after taking off.

Searchers discovered the crash site around four hours later in a remote mountainous region on the Swedish side of the border with Norway, around 200 km (124 miles) northwest of Gällivare.

From the small impact area, the aircraft appeared to have dived into the rocky terrain at a steep angle.

The flight data recorder (FDR) was recovered Jan. 9, followed shortly afterward by part of the cockpit voice recorder (CVR). The CVR was missing its memory functions, but this component was found on Jan. 10.

Both recorders were heavily damaged, the SHK’s deputy director-general and chairman of the investigation, Jonas Bäckstrand told ATW,

This process may take several weeks.

In a statement, the SHK said the recovery of the two recorders made it believe “that it will be possible to determine why the aircraft crashed.”

It is not standard SHK procedure to issue a preliminary report into a crash, Bäckstrand said. This is normally only done if an investigation stretched beyond a year. However, an exception might be made in this case, because of public interest in the crash. He said final reports are typically issued 10-12 months following an accident.