What is Turbulence? Does it Pose Any Danger to Safety? 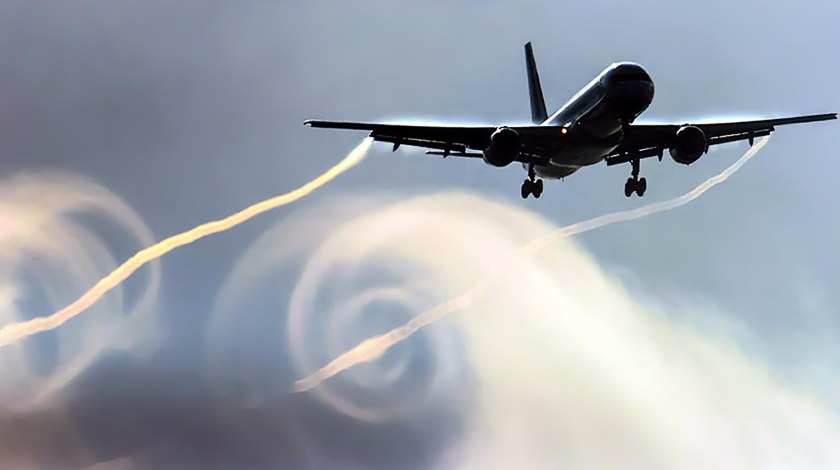 Turbulence is the primary cause of non-fatal aviation accidents each year. Although it is not considered as a deadly threat, none could say that it is a pleasant experience, neither passengers, nor flight and cabin crew.

Sometimes it happens to hear that passengers who know little about turbulence, or even do not have a clue that such a phenomenon exists, lay the blame at pilots’ door. However, pilots are not able to deliberately shake a plane or create an illusion of bumping on the clouds.

Turbulence is all the weather phenomenon, thus all the factors impacting a plane are external. Each pilot is well-trained to know this and well-prepared to handle it. It does not come as a scary surprise, just as drivers are not terrified at seeing a pit on the road while driving.

Therefore, if you are a flyer that becomes horribly afraid when an aircraft starts shaking mid-flight, let’s understand what the turbulence is, why it appears, how dangerous it is and how to survive it.

What Is Turbulence? What Are the Causes?

According to the Dictionary of Aviation, the turbulence is “an irregular motion of the atmosphere“. To make it more simple, turbulence is created when the invisible waves of air moving at a particular speed meet another mass of air that is moving at a different speed.

The Federal Aviation Administration of the US provides that turbulence could appear due to various conditions, “including atmospheric pressure, jet streams, air around mountains, cold or warm weather fronts or thunderstorms. Turbulence can even occur when the sky appears to be clear”.

Turbulence is measured and classified depending on its intensity into four types: light, moderate, severe or extreme. 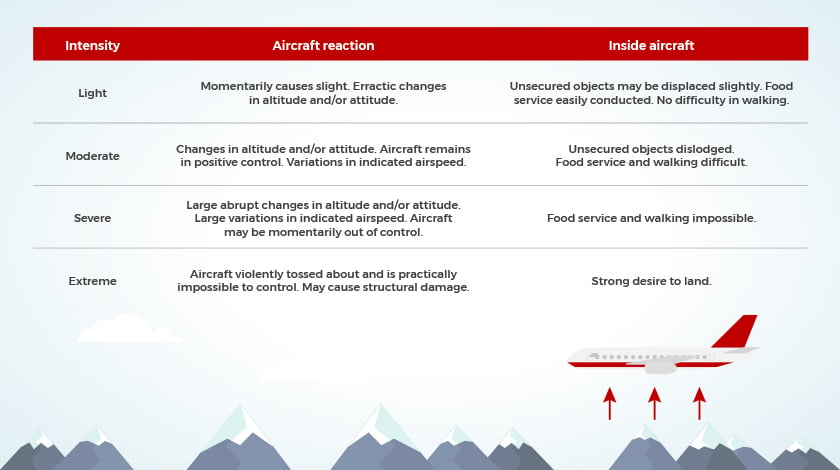 Also, it is divided into the following types, depending on the cause:

Convective – uneven heating of earth’s surface, which causes air in contact with the surface to warm at different rates. Most often this type of turbulence is linked to severe weather conditions.

Mechanical – when air near the earth’s surface becomes disrupted as it passes over obstructions such as buildings, trees, and irregular terrain. The higher the wind speed and the rougher the obstruction the greater is the turbulence.

Mountain-wave – mountains cause turbulence as the wind tries to flow around and through them. When the wind flows over the top, it can set up waves of air known as gravity waves.

Wake – in-flight aircraft could also create wake turbulence. When an aircraft generates lift, it produces a pair of counter-rotating cylindrical air masses, called wake vortices. These, in turn, are a potential hazard to following aircraft.

In most cases, travellers associate turbulence with stormy weather, massive winds and frightening thunderstorms. Someone could even imagine it happening just like in the movies when the blue sky and limitless horizons outside the aircraft rapidly fade away and the plane enters the mass of dark clouds.

However, worth highlighting that turbulence could also appear on a sunny day while curious passengers are exploring the world through the aircraft window. This type of turbulence is called “clear-air turbulence” (CAT). Even though CAT could caught an aircraft during any of the seasons, the most frequently it appears in winter.

Is Turbulence Dangerous to Passengers?

In aviation – safety first. Although turbulence is a rather ordinary phenomenon taking place up in the air, it could be dangerous, both to passengers and cabin crew. How to prevent yourself from the consequences of turbulence?

One of the primary measures against turbulence and possible in-flight injuries is your fastened seat belt. As simple as it is.

I believe it has ever happened to some of you to hear flyers complaining about the necessity of being fastened throughout the flight. Some of these unhappy passengers even neglect to follow the instructions justifying their actions with a simple reason: if the plane falls down, fastened seat belt will not rescue the life.

In case of a fatal accident, most probably, the seat belt will not act as a saviour, although it might help to survive extremely hard landings. Primarily, seat belts serve to prevent from in-flight injuries, they help to keep people in their places during the most dangerous parts of a flight – take-off, landing and while passing the area of turbulence.

If you still have some doubts, then consider some statistics as a direct evidence: approximately 58 people in the US are injured every year by turbulence while not wearing their seat belts, and half of them are flight attendants. The injuries are different, therefore, with head, neck, shoulder and ankle injuries being the most common.

Thus, pilots keep seat belt signs on to ensure safety when it is necessary. To make the effects of turbulence felt less, pilots can also change altitude looking for smoother air.

Nevertheless, fastened seat belt is not the only precautionary measure passengers can take to ensure better conditions for a safe flight in case of turbulence. It is also important to adhere to the airline’s carry-on restrictions. While boarding a plane or even during a flight it is crucial to prevent any of your things from unintended movement.

Unsecured objects are the major threat during severe or extreme turbulence. Cabin attendants are particularly at risk.

Regardless the situation, it is of a key importance to listen to flight attendants and keep your focus on all the safety rules to have a smooth and successful flight.

Can Turbulence Damage or Destroy a Plane?

The modern aircraft is manufactured to withstand an enormous amount of stress, including turbulence. Therefore, it is barely possible for a frequent flyer or a pilot to ever have an experience of turbulence dislodging an engine or causing any structural damage to a machine.

Usually when the aircraft starts shaking, the majority of passengers pay their attention to wobbling wings, don’t they? And at this point the biggest concern arises: can the wings detach from the body of an aircraft?

In the era of modern technologies and endless opportunities, each aircraft undergoes intensive testing before taking off to the sky. Therefore, compared to these tests turbulence is basically nothing.

Before an aircraft manufacturer releases its plane to commercial service, a series of rigorous static and flight tests are carried out. One of the series is aimed at wings, in particular. During this inspection aircraft wings are put under both normal and non-normal conditions, for example, bent to extreme angles, meaning that they are flexed up to nearly 90 degrees in a test rig.

As it follows, flexing and bending of a wing in flight is intended by design, whereas a very rigid wing would break much more easily. Skyscrapers are also designed this way, to actually sway a little – it makes them far more robust.

Over the whole history of modern commercial aviation, the number of plane crashes caused by turbulence, even indirectly, can be counted on one hand.

How Do Airline Pilots Know about Turbulence?

The pilots have multiple sources of information that they can rely on when we talk about turbulence. One of the most trustworthy sources is the flight crew flying ahead. This way pilots pass the information in real time.

Also, such details are reviewed during pre-flight weather briefings, which include not only forecasts of turbulence but also pilot reports.

Apart from that, pilots are in a constant contact with a flight dispatcher who monitors weather conditions throughout the entire flight. Some major airlines even has their own teams of meteorologists who secure flight dispatchers with the latest data to alert the flight crew.

Additionally, there are a lot of special tools aimed at predicting turbulence or helping to identify the one in advance.

Also, pilots can predict the possible turbulence on their own while operating a plane and they are able to minimize its effects or even avoid turbulence by choosing another route, for instance. However, sometimes, when multiple storms are lined up in a row and a course decision would require too much fuel, a pilot may pick the weakest storm area to fly through.

There are some extra cases, when the plane encounters severe/extreme turbulence which lasts far too long causing inconveniences to passengers, or even makes people sustain injuries. In such cases, of course, pilots might make a decision to divert to the nearest airport for an emergency landing.

Nevertheless, such situations are quite rare.

“Flying continues to be the safest form of long distance travel the world has ever known. Based on the data, on average, a passenger could take a flight every day for 241 years before experiencing an accident with one fatality on board. W

e remain committed to the goal of having every flight take off and land safely,” highlighted Alexandre de Juniac, IATA’s Director General and CEO, in the safety review for 2018.