Why Drone Use is Different in Africa 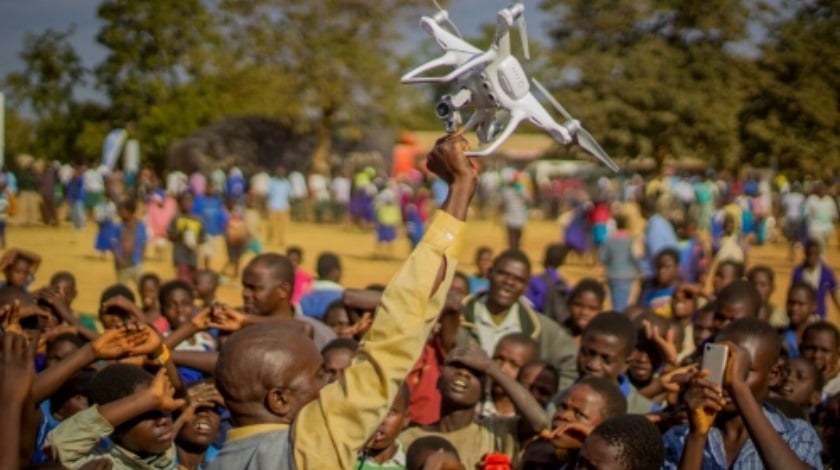 The African unmanned aerial vehicle (UAV) market is interesting in comparison to other regions of the world, with less dominance on the military use of such technologies and more emphasis on the humanitarian benefits. Beth Stevenson reports.

A UAV can be used to deliver aid or samples for testing, watch for wildlife poachers, and provide surveillance over areas in which there are tensions – applications that are all relevant to the various requirements and geopolitics of African nations.

Despite there being more traction in the humanitarian and peacekeeping segments, there is still a small military market, primarily coming from the South African defence industry.

Systems belonging to the Denel Dynamics Seeker series were operated by the South African Air Force until the mid-1990s, and variations of the family are still provided for export today for nations including the United Arab Emirates and Algeria.

Furthermore, up until early 2017, the Seeker II underwent testing at Kruger National Park to assess its potential to spot animal poachers, although the results were not as conclusive as expected and a year-long trial came to an end as the park opted to continue its work by using other aviation assets.

It was reported that the thermal imaging payloads used could not distinguish between poachers and animals. But, while this project did not prove fruitful, the park has not ruled out using UAVs again in the future.

The aircraft used for this effort were provided by South Africa-based UAV & Drone Solutions. Its systems are still being used for other conservation projects.

A more successful employment of the company’s UAVs to help catch poachers is through the Air Shepherd project, which is currently carrying out operations in Malawi, South Africa and Zimbabwe, with the potential to expand into Botswana, Mozambique and Zambia.

In order to find animals like elephants and rhinos, poachers employ a range of technology, including night vision and sophisticated weaponry, the project says, so it deploys electric-powered UAVs with day/night cameras and image processing capabilities to provide over-watch and catch the poachers.

Air Shepherd is a charitable effort ran by the Lindbergh Foundation, which funded the 12-month pilot programme in South Africa in 2015. It is still going strong and has expanded into the other African countries, as poaching continues to be a problem across the continent.

For the Air Shepherd effort, the UAVs carry infrared cameras and GPS payloads to identify both the animals and poachers as they move across the area of interest at night.

According to the foundation, the aircraft are battery-operated and nearly completely silent, which enables them to go undetected while tracking poachers in order to then pass on the information to rangers, who can stop the crimes being committed.

The UAVs monitor the animals as much as the poachers, analysing the angles they come at to target their prey. The University of Maryland is aiding with this, carrying out analysis of the poachers to help determine behaviours and trends that they follow, so as to predict their actions.

Another humanitarian application for the technology is for health monitoring. For example, in Malawi, the Matternet One UAV has been tested to assess its potential to transport blood samples from babies for HIV testing.

A common choice for deliveries, the Matternet One has also seen success in Switzerland, where it is also used for transportation of samples between hospitals, as well as by Swiss Post for mail delivery.

Matternet teamed with Unicef for the Malawi testing in 2016. The charity declared that the feasibility study had been a success and that UAVs were a viable addition to existing transportation methods for applications, including moving blood samples for HIV diagnosis.

Following the success of the trial, in December 2016 it was announced that the Malawi Government had once again teamed with Unicef to create an air corridor in-country for UAV use.

It is the first of its type in Africa, the charity says, and internationally it is one of the first corridors focusing on humanitarian and development use. It was opened by Malawi’s Minister of Transport and Public Works, Jappie Mhango, and Unicef Malawi representative, Johannes Wedenig, in June 2017.

Covering some 40km, the corridor is designed to provide a defined space in which UAVs can be used for testing different applications, including the delivery of small payloads such as emergency supplies, vaccines and samples for diagnosis.

Additionally, imagery will be collected to aid with crises such as floods and earthquakes, with the data used to help responders plan how to deal with situations. The corridor will also test the potential of UAVs being used to bolster and extend connectivity in remote areas, including internet and telephone services, particularly following natural disasters and other events.

The United Nations (UN), meanwhile, is now in its fourth year of using UAVs for peacekeeping efforts in the Democratic Republic of Congo.

“We are under contract for the fourth year of activity and we are performing the missions as and when we are required to by the UN mission on site in the DRC,” said Fabrizio Boggiani, senior vice-president of support and service solutions for Leonardo in Italy, noting that the activities are running on a regular basis and in accordance with requirements coming from the UN.

The baseline Falco configuration is currently being used. However, should the UN require different services, Leonardo could opt to use its newer Falco Evo system that has an increased payload capacity and endurance.

“We are currently using the Falco because it satisfies the requirement and type of mission,” Boggiani said. “We are aware that there could be other needs, so we are ready and we have already offered the option to move to the Evo in case of a different mission.”

The original contract was for three years, followed by a year add-on.

“We are supporting their mission and, if the mission is to continue, we are confident that we can continue. It is the UN that will decide on what to do in the future,” Boggiani said.

The Falco can carry a 70kg payload and operate for between eight and 14 hours, depending on the configuration and mission.

“We have to be ready to fly when and where they require it, as well as providing the data from the sensors we have on board,” Boggiani said. “Then, based on the data collected, either in real time or after analysis, they decide what to do from the point of view of the operation.”

As for the potential to expand the mission, Boggiani could not add much detail, other to point to the fact that the UN could have requirements elsewhere in Africa: “It’s public knowledge to a certain extent that there are other areas, particularly in Africa, where the UN is thinking of operating, or is already present.

“There is the possibility that the UN could use the UAV technology and services in other areas but, once again, these are the plans of the UN and we are always available based on the huge experience we have gained over the last four years.”

Leonardo is now planning to use its experience for other commercial operations, announcing at the Paris Air Show in June 2017 that it is establishing a new business unit dedicated to UAV services.

“This [the UN mission] is definitely a pioneering success story,” Boggiani noted. “We are very proud of what we have done. From many different angles, it is a success story.”

Given the geographical, geopolitical and economical nature of much of Africa, the use of UAVs to replace other technologies – or even introduce aerial systems into certain operations for the first time – is logical.

This disruptive technology can provide a more stealthy and cost-effective alternative to manned aircraft that are often used to catch wildlife poachers, for example, and while there is arguably still some work to be done to perfect their use for this, the benefits are beginning to be realised.

Peacekeeping, meanwhile, is a necessary mission in the region, and employing an unblinking eye can help monitor tensions in the early stages to avoid any unnecessary conflict.

While Africa is not seeing much use of the two ends of the UAV spectrum usually associated with this technology – namely high-end military systems and low-end consumer drones – the mid-ground it is sitting in has much potential to the continent and its needs, and is proving fruitful already.