Will Bombardier’s CSeries Bring Triumph for the Manufacturer? 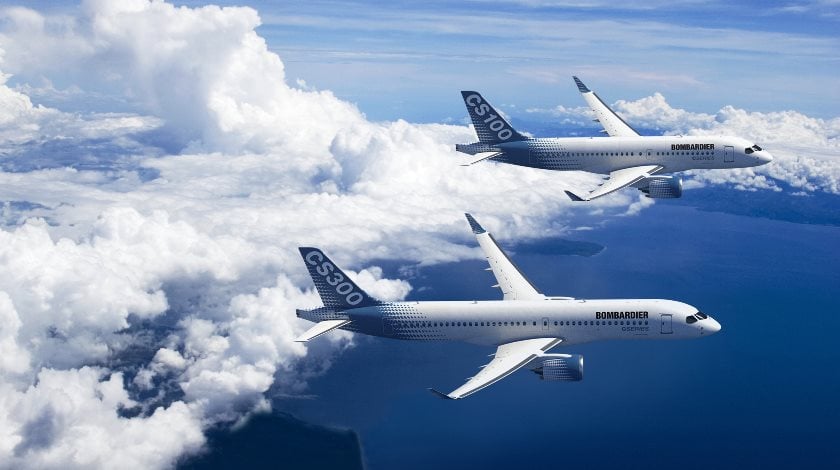 The huge buzz emerged after Delta placed a firm order for 75 CSeries Bombardier jets. Whether it is great a success or a sorrowful loss depends on the point from which you look at. Canadian manufacturer cannot be more proud to have such an honorable airline within its clients. However, big players may be a bit upset because of increasing competition in the market. But is it really something to be worried? Can one order break the ice and destroy the duopoly of Airbus and Boeing?

It is no secret that aviation market itself is expanding and adjusting to the demand of frequent flyers. Therefore, aircraft manufacturers are keen on being in the top positions. Airbus and Boeing are long lasting leaders when it comes to the number of orders. The numbers reach or even exceed the thousands every year. This leaves manufactures ensured about the stable future.

(Orders and deliveries of Airbus and Boeing taken from official websites)

Both trustworthy companies have no intentions to allow any new entrants to create the higher competition than they already face. However, Bombardier has just shaken the market and created a lot of whispers by winning Delta’s order.

The new player in the “big boys” field

The new program introduced by Bombardier is called CSeries and is aimed to conquer the 100 plus seats narrow-body’s market. The major advantage in front of big players in aircraft business is that Boeing and Airbus do not have what to offer in this particular size segment. Both Airbus and Boeing decided to eliminate their smallest narrow-bodies (A318 and B737-600) from the NEO and MAX programs. This decision means that innovative solutions are only being offered starting from 124 and 126 seaters respectively.

The business jets are becoming more and more popular in the whole world especially for domestic flights. Major American airlines like Delta, United Airlines and Air Canada are all using business jets for their operations. Although, almost the entire business jet’s market is occupied by Embraer’s E190/195 aircraft accounting to nearly half of the global fleet which is in service (Flightglobal research). However, it is not the only competitor in this segment – Comac, Mitsubishi, NG Aircraft and Sukhoi should not be forgotten.

Despite the increasing need of smaller aircraft, Bombardier was struggling with orders for more than a year since the introduction of the new CSeries program. The main reason for it might be the time needed to build global trust and receive first orders as a new manufacturer in the segment.

How did they do it?

So how did the Bombardier get the Delta’s order for 75 CS100 aircraft and 50 plus as an option for the future? The three key reasons are thought to be good price, early availability and technical superiority. Bombardier is a perfect solution when it comes to the need of 100-150 seaters in narrow-body’s market.

However, not everything is as smooth as it may seem from the first glance. In order to succeed with CSeries, the production of Global 5000 and 6000 has been cut last year. Struggling demand for business jets in Latin America, Russia and China reduced the number of orders. Nonetheless, company expects North America to dominate in the business jet market over the next decade. 3900 aircraft are expected to be delivered through this period in the region, while Europe is the second market with 1530 expected deliveries as reported by Bombardier’s market forecast.

Big players are not going to give up

It is not a secret that Bombardier is playing aggressively when it comes to pricing strategies. The price which was given to Delta for CSeries is not disclosed. Obviously, it was low enough. This was the breaking point where discounting prices strategy on B737-700s and A319s has stopped working.

On the other hand, United ordered B737 for a reasonable price as the result of the pricing war which keeps CSeries from more orders. Price pressure is surely to be felt in the market.

The discounts were used as attractions to draw the attention of the clients. Bombardier’s management realized that the attraction of the new investment into the market will bring more benefits than create losses for Bombardier.

It was crucial for the Canadian manufacture to enter the market with its new production. Even though, new deal might not give much of a profit, it surely ensures the first break point in the league. Airbus executives should no longer consider Bombardier as the manufacturer producing “nice little airplanes” as John Leahy, Chief Operating Officer stated in Paris Airshow last June.

What’s in it for Bombardier?

You may ask what does this mean for Bombardier. Is it just another order or should it be seen as a big step into the fortunate future? The major order is not only a big prize with the guarantees of revenue (firm order is valued at around $5.6 billion US) but it also means that CSeries will be operated by one of the largest and most successful airlines in the world.

Delta, Air Canada and AirBaltic’s purchases are all seen as strategic orders more than profit gainers. It is an important evaluation for Bombardier to be chosen by credible airlines.

Delta’s order helped Bombardier to overcome Brazilian manufacturer and stop it from getting into US market with E190/195. It was an overwhelming surprise for Embraer which is the leader in E-Jets market.

The unfavorable consequence of this grand order is that Bombardier’s Global 7000 and 8000 long-range jets’ entry into market is postponed to 2018 and 2019 respectively. These actions leave the main competitor- Gulfstream unchallenged. 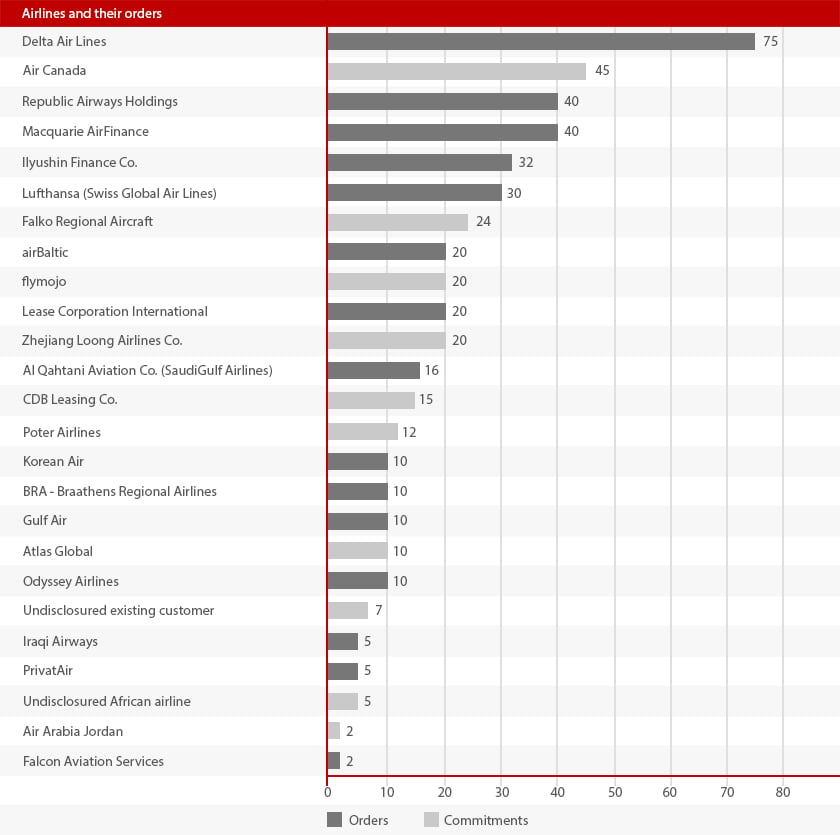 302 aircraft are set as an option which includes such companies as Delta with 50, Republic Airways Holding with 40, SWISS and Air Canada with 30, and other smaller orders.

Why should airlines decide to choose Bombardier instead of any other manufacturer? C series family is claimed to be representing the combination of performance and technology. It beats the competitors by being 100% new family specifically designed for 100-150 seats and single-aisle market. Latest technologies, materials and aerodynamics allows CSeries to offer over 15% less operating expenses as well as more than 20% savings in fuel.

Environmentally friendly airplane will help to reduce both environmental and noise footprints. Not to mention flexibility and wide-body comfort inside the narrow-body aircraft. The alluring aspect for customers is the wide aisle with comfortable seats.

Bombardier’s CSeries is under the spotlight at the moment. The booming buzz might give additional benefits as credential airlines will not only give revenues but also create the high standard image. When talking about the competition with the major players, it will surely be the headache for Airbus and Boeing if unexpected success for 100 seaters appears in the nearest future.