Wing Was Mounted on the Antonov AN−132D 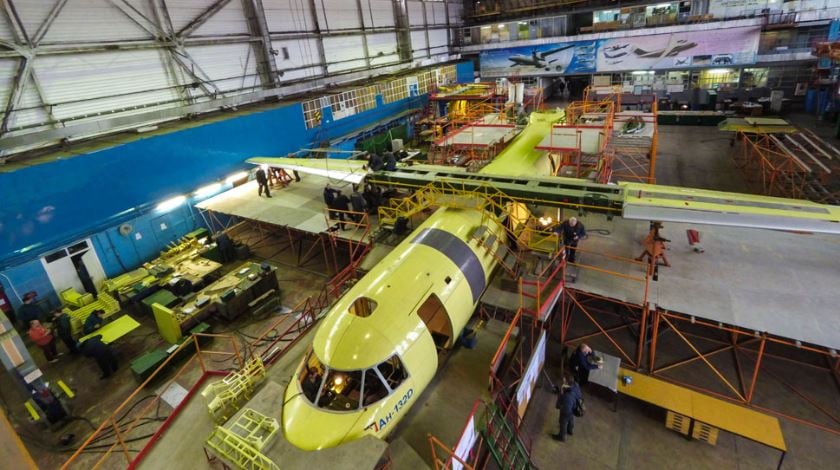 In assembly shop of ANTONOV Company works on mounting the wing on the AN−132D aircraft demonstrator were completed. The next stage of the aircraft construction, which is created according to the contract with King Abdulaziz City for Science and Technology (KACST), Kingdom of Saudi Arabia, has been performed.

Simultaneously with construction of the aircraft demonstrator, ANTONOV signed an Agreement with Taqnia Aeronautics company, which was selected by Saudi party as production and marketing partner on organization of cooperative series manufacturing of the aircraft.

The AN−132 is a light multipurpose aircraft intended for transportation of various cargoes weighting up to 9.2 t on short− and medium−haul air routes. Besides, it will be able to air drop palletized cargoes and paratroopers, to carry people, sick and injured persons under emergency situations.

The AN−132 is an optimal decision for replacement of the AN−32 light transports operated in different regions of the world. The new aircraft will have all the best characteristics of its predecessor. In particular, it will be effectively operated under hot climate and in mountain terrain, from/to different airdromes. It will be reliable and flexible in operation. The AN−132 will differ with better technical and economical, operational characteristics: payload increased by 23 percent, flight range increased in 2.75 times while carrying 6 t of cargo, high fuel efficiency, low noise and emission level. AN−132 will have two−member “glass” cockpit, avionics and equipment meeting the modern standards. Airborne loading/unloading equipment, APU will provide its autonomous operation at poor−equipped airfields.