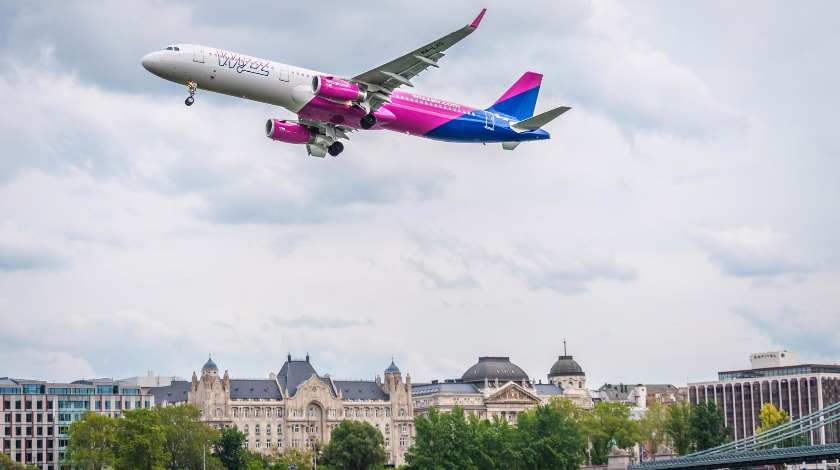 Wizz Air is one of the biggest and, at the same time, one of the fastest growing low-cost carriers in Europe. The airline was established in 2004 and through its launch year succeeded in carrying 0.7 million passengers.

Now, after 15 years of operations, Wizz Air serves 700+ routes to 151 destinations and by the end of 2019 targets to have 40 million travellers carried by their distinctive Airbus aircraft.

Wizz Air competes with the biggest carriers in Europe and there is no secrete that fierce competition on the crowded market is among the biggest risks.

During the Air Convention 2019 Europe conference József Váradi, CEO of Wizz Air, admitted that “operating environment in Europe is getting really tough”, but with a clear strategy Wizz Air has enough courage to set ambitious goals.

The W300 growth plan is the airline’s vision for an upcoming decade: to triple the fleet to almost 300 aircraft by the end of 2026 carrying 100 million passengers a year. How will it be achieved?

Business Model to Remain the Same

Naturally, new plans and goals are aimed at new opportunities, but the business model Wizz Air developed in 2004 will remain the same. During his speech CEO of the airline assured that Wizz Air will definitely remain focused on its key markets in Central and Eastern Europe.

Apart from these markets, Wizz Air is actively eyeing the Western part of Europe, too. In light of upcoming challenges expected after Brexit comes into effect, the Hungarian low-coster has established Wizz Air UK, which in 2018 was granted an Air Operator’s Certificate (OAC) and Operating Licence (OL) by the United Kingdom’s Civil Aviation Authority.

Furthermore, the Hungarian airline intends to grow its business beyond the borders of the EU. “With a strong strategic position to offer the lowest fares on the market”, Wizz Air is looking for the ways of penetrating, for example, Russian market. It already has a base in Georgia, it is on a high demand in Israel, it operates in Turkey, Ukraine and regions including the Caucasus, North Africa and the Middle East.

According to Wizz Air, its key competitive strength is its commitment to driving costs ever lower while delivering a superior service and building a loyal customer base.

To meet the organically growing demand for air travel and reach the set ambitions, Wizz Air is set to significantly expand its Airbus fleet. The airline has 271 Airbus aircraft on order. Until the year 2027 Wizz Air fleet should consist of five A320s, 70 A320neos, 15 A321s, 185 A321neos and 20 A321 XLR.

However, Váradi stressed the problems and lack of coordination within the aircraft manufacturing industry. “It is not only Boeing which struggles with deliveries, it is also Airbus which fails to secure deliveries on time”, said the CEO.

Worth noting that Wizz Air has on order 20 Airbus A321 XLR, the newest program of Airbus launched this year during Paris Air Show. It is the single-aisle aircraft with an extended range up to 4,700nm. Correspondingly, it is reasonable to predict that Wizz Air will be able to offer direct routes connecting farther points this way even better serving its customers.

Váradi put a lot of emphasis on customer experience. Wizz Air is an airline driven by the desire to create value for its passengers. The airline knows its audience and tries to satisfy the needs.

“Now customers are different. They are changing, they want to have more. They are more self-sufficient, technology-driven”, Váradi  highlighted.

Wizz Air is the airline “that makes money”, it is the airline good for investors. But it is also the airline that cares for the customers and operates depending on the demand that comes from the public flying it.