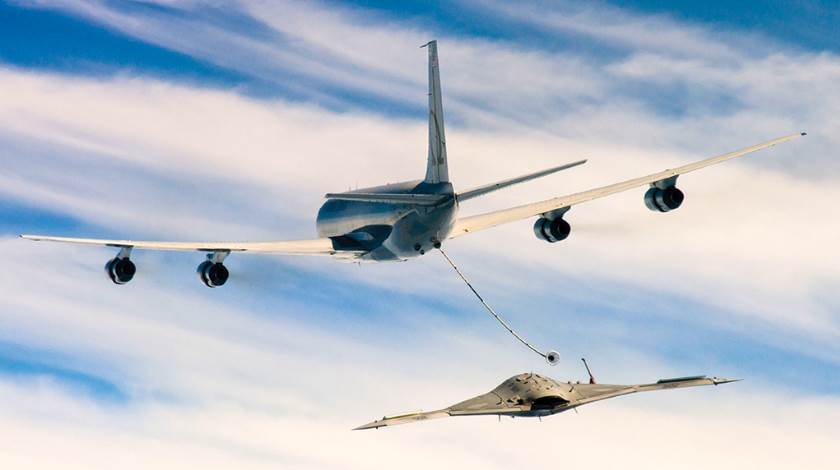 The U.S. Navy’s X-47B is the first unmanned aircraft to successfully refuel midflight—a feat test pilots found more challenging than landing it on an aircraft carrier.
The aircraft only had a matter of inches in which it could moveversus a number of feet on the aircraft carrier,” said Lt. Cmdr. Jeff McLean, Air Test and Evaluation Squadron (VX) 23 project officer for the X-47B, the Navy’s demonstrator for a future carrier-based unmanned aircraft. “The aircraft carrier can move with the ocean, but it’s still relatively stable, whereas the [drogue] basket can just move so wildly and unpredictably in space that it’s the real challenge.”

Despite the challenges, the X-47B linked with an Omega KC-707 tanker and received more than 4,000 pounds of fuel during three days of testing in April over the Chesapeake Bay using the Navy’s probe-and-drogue method—the same one used by Navy pilots when refueling manned aircraft.

An F/A-18 pilot by training, McLean was one of two operators during the first two days of testing, a task he said amounted to pushing buttons that initiated the aircraft’s takeoff and, once it had positioned itself behind the tanker, prompted the refueling process.
The probe-and-drogue method requires the refueling aircraft to insert a fixed probe into a drogue, or basket, attached to a tanker’s fuel hose.

The chief difference between a manned and unmanned refueling, McLean said, comes in accounting for the constant bobbing motion of the drogue—which resembles a badminton shuttlecock—as it trails behind the tanker.

Whereas human pilots can instinctively anticipate the drogue’s movement, the X-47B has cameras that track the basket and perform calculations to predict where it will be at the moment of connection.

“The drogue bounces around in space, so a pilot can make tiny little corrections in real time, whereas the X-47B is doing a whole bunch of computations and essentially sets up a time and space where it thinks the basket is going, and if the basket is bouncing up and down, that can be difficult,” McLean said.

The plane uses GPS to approach the tanker until it is about 20 feet from the drogue, at which point the optical system takes over, McLean said.

Like any aircraft, the X-47B also produces a thin, forward pulse of air known as a “bow wave,” which can move the basket just as the probe is approaching, similar to a speeding car pushing falling snowflakes over its hood.

“That’s why it’s such a huge achievement, because of all those unknowns, and when you’re talking about inches of precision required, any bump the tanker hits only magnifies movement for the basket, like the whip of a tail,” McLean said.

Another challenge is that, with its probe out on the right wing, the X-47B has to fly with a focus on keeping that part of the plane stable while refueling. While landing on a carrier, the X-47B can keep its center mass steady as in normal flight.

The first day of testing was spent calibrating how the drogue would react to the X-47B’s bow wave. The team programmed the aircraft to approach the basket from a certain position, but found that the bow wave moved the basket up and to the right far enough that the X-47B could not chase it. So they offset the approach up and to the right by one foot, and achieved a successful plug on their last attempt of day one.

“The next day we went back and we nailed it because we’d figured out where the plane should be positioned to make the basket predictable and it was pretty much automatic,” McLean said. “Before the optical system takes over for the fine movements of the basket, the plane is flying by GPS at a relative position to the tanker, so we had to figure out how high up and down the plane should start that approach to reduce the bow wave’s effect.”

McLean contrasted the refueling of an X-47B with that of an F/A-18, which has its probe far back enough on the nose that pilots are able to easily anticipate the plane pushing the basket up. “It’s a very predictable movement. We basically know where the basket is going to move,” he added.
Turbulence remains mid-air refueling challenge

McLean said the team had three objectives during testing: three successful plugs, to stay connected for five minutes, and ultimately transfer 3,000 pounds of fuel. It accomplished the first two goals during the second day, and wrapped up the third in short order on day three.

“It didn’t last very long,” McLean said of the third day of testing. “Pretty straightforward. It was quick because it was successful right away.”

“Pretty straightforward” only applies when the refueling is conducted amid clear skies and the basket is affected by minimal turbulence.

“It is predictable, but the challenging variable is turbulence,” McLean said. “If there’s turbulence, then the unmanned refueling becomes much, much harder. I think that is something that with more testing they could improve the system, but I think it’s always going to be a challenge. That’s the challenge for manned refueling too, is the motion of the basket.”

The Navy is examining a range of potential follow-on activities involving the X-47B air vehicles, which remain in flyable stand-by status at Patuxent River, Maryland.