In 2016 Lufthansa reported that a single six-day-long pilot strike cost the airline €100 million ($118 million). It was the 15th time in two years when pilots at the Lufthansa group’s namesake airline had walked out in a lengthy battle led by the local union. And legacy carriers are far from the only ones suffering from what more and more experts call “trade union blackmail”. Recent flight cancellations due to the reported pilot rostering issues will officially bleed the low-cost giant Ryanair by approx. €35 million ($41 million) in compensation payouts and other costs.

Whilst airline bosses are locked in battles with union leaders over pay and the improvement of various already rather “cushy” working conditions, industry experts are seeking new solutions to eliminate the ever-hanging threat of these fierce pilot trade unions once and for all.

“One of the possible options – substitute pilots, who could get their training financed by airlines and then, in time of need, step in to replace their colleagues on strikes, save airlines millions of dollars and, most importantly, serve the needs of no longer frustrated passengers,” says a long-standing aviation business professional and Chairman of the Board at Avia Solutions Group Gediminas Ziemelis.

Nowadays, many pilots working for airlines are members of not only just local, but also international trade unions. After all, substantial remuneration packages allow them to easily cover comparatively high membership fees which, in turn, provide unions with considerable funds necessary to retain the services of highly paid lawyers and thus negotiate the best-crafted contracts. As a result, many carriers are forced into agreements prohibiting them to lease crew for seasonal peaks, establish daughter airline subsidiaries without union blessing and exercise other rights typically enjoyed by enterprises operating in most other business industries.

“Just imagine if a large IT provider which serves nuclear powerplants (another high-risk industry) had to succumb to union demands not to hire external labour force, even subject to a suddenly increased workload. You must agree, that would make no sense whatsoever. But somehow, in aviation, it seems to be quite a norm…” says Gediminas Ziemelis.

Commercial pilot – one of the most overpaid professional in the West?

According to G. Ziemelis, although unions are fast to substantiate their increasing demands by voicing concerns about flight safety, in reality they commonly insist on simply getting what they want… because they can. Based on the observations of most industry experts, it is none other than the power of wealthy trade unions accompanied by the inability to locate enough of available pilots that have made the profession amongst the most overvalued ones in the Western hemisphere. After all, in order to become a pilot one doesn’t need some mysterious talent. All it takes is strong health, responsiveness, determination and a set of character traits allowing to deal with stressful situations in compliance with the set procedure. Everything else can be taught during aviation training.

It takes as few as 21 months to earn a pilot license for anyone without any prior training and another 12-14 months of flying with an instructor in order to accumulate the necessary number of fight hours.

“Take, for instance, a bus driver. He or she is also responsible for safe transporting tens of people at a time. However, a bus driver isn’t paid a third of what a pilot is.” says G. Ziemelis.

The provided map of average pilot salaries shows a clear gap in remuneration across different regions. Needless to say, the responsibilities of a €10000 ($12,000)-earning French or Irish pilot would be gladly overtaken by a professional with company-financed training, earning approx. €4300 ($5000) per month from Poland or Lithuania. “And we are talking about experienced pilots from countries with deep aviation traditions and solid training infrastructure. They fly because they are dedicated to their profession and simply love the job, not because some trade union has managed to negotiate a couple of added perks or privileges,“ commented the executive. 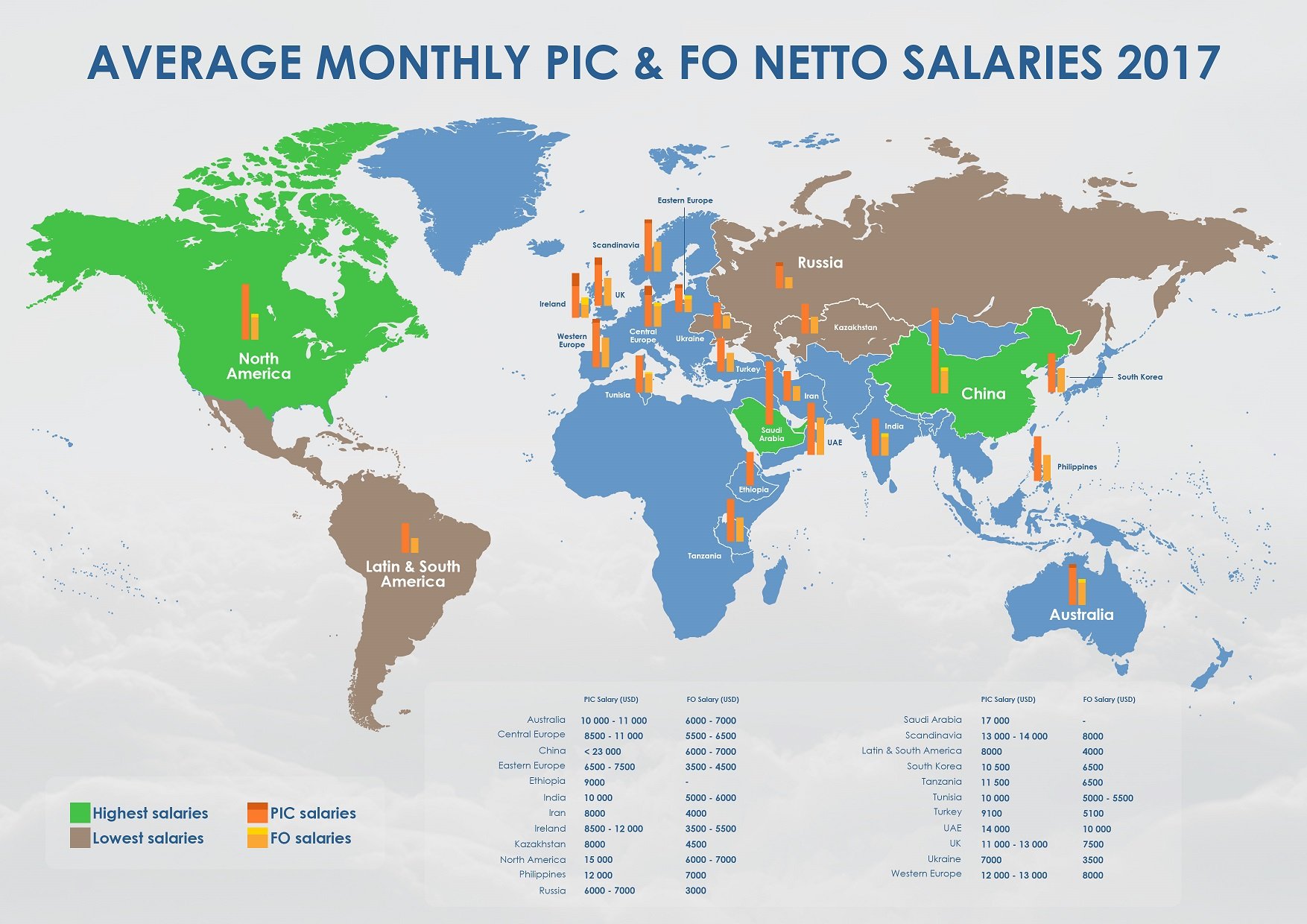 Substitute pilots – a drastic solution to a pressing problem

Avia Solutions Group, managing one of the largest pilot centres in Eastern Europe BAA Training, has already entered several preliminary confidential contracts with large carriers to train a number of the so called substitute pilots. These companies are ready to cover the cost of training new pilots for several years. Following their training, these pilots shall gain the primary flying experience and accumulate flight hours in smaller airlines. Then, if there’s a pilot strike, the airline which has initially covered his or her training, can call upon the pilot to fill in the empty seat on a temporary or permanent basis. This way no pilot on strike can compromise normal business and approximately 350-500 substitute pilots will be able to gain experience flying for the industry giants. It’s simply a win-win solution.

“It is simple math, really. In order to train the aforementioned number of substitute pilots an airline would have to spend approx. €50 to 70 million ($ 40 to 60 million). Just let me remind you that the recent schedule disruption has already cost Ryanair in excess of €35 million ($ 41 million). And who in their sound mind would place their money on this being the only time that pilots refuse to fly in the upcoming decade? I, personally, wouldn’t,” said Chairman of the Board at Avia Solutions Group G. Ziemelis.

In the opinion of G. Ziemelis, the future belongs to such aviation companies that are not afraid of seeking aggressive solutions to problems posed by the overly powerful trade unions. “If there’s a need, we will train the entire abled-body population of Lithuania (around 300,000 people),” joked G. Ziemelis.