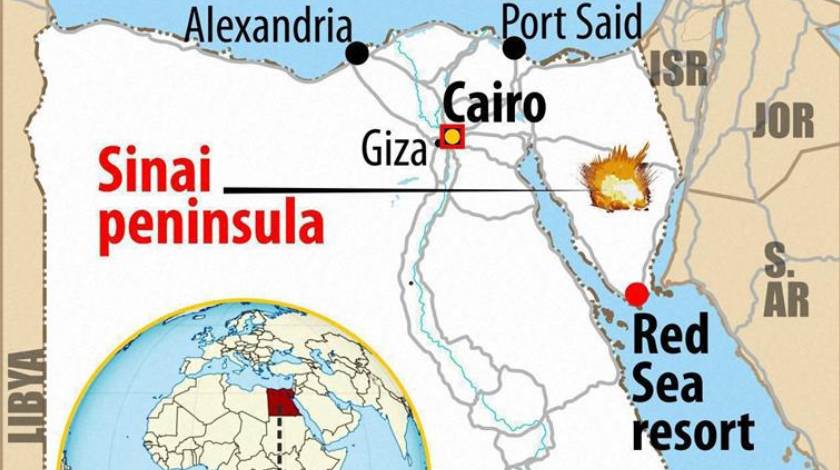 Egyptian investigators for the Metrojet Airbus A321 crash say it has not received “information indicating unlawful interference” or a “terrorist act” in the Oct. 31 crash, contradicting statements made by Russia’s Federal Security Police in mid-November that “a self-made explosive device equivalent of up to 1 kg of TNT” had been set off on board.

A catastrophic mechanical problem is highly likely, given that the tail section of the Airbus came to rest in a separate location from the remainder of the fuselage after a rapid descent from 31,000 ft. as the aircraft climbed out from the Sharm El-Sheikh airport on a flight to St. Petersburg, Russia. A bomb, fuel tank explosion or structural failure caused by a potentially flawed repair after a 2001 tail strike have all been raised as possible scenarios. In the aftermath of the crash, Russia terminated service to the area, while the UK halted flights to Sharm in particular.

The Ministry of Civil Aviation submitted its preliminary report on Dec. 14 privately to ICAO and other parties to the investigation, but public information was limited to several statements on the Ministry’s website and did not single out any potential causes.

In the statements, the Egyptian government said a team of metallurgy specials had examined the wreckage, which in some cases was approximately 9 nm. from the main crash site. It also said that photo documentation included 3D techniques. The flight data recorder and cockpit voice recorder had already been recovered.

Officials said “full opportunity” had been given to all the concerned parties, including the insurance company officials and Russian working team, to assess the wreckage on site before the components are moved to a location in Cairo.

Investigators had removed 38 “computer units” from the aircraft to analyze, as well as two from the engines. They were evaluating pilot training records along with the technical status and detailed repair reports on the aircraft, which was built in 1997. The government included a statement that it is not interfering with the work of the independent committee headed up by the investigator-in-charge.

Egypt, however, is being proactive about restoring its tourism business in the Red Sea and Sinai area, which is served by the Sharm and Hurghada airports. The government, primarily through the Civil Aviation and Tourism departments, is bolstering security and launching tourism initiatives. There had been reports that two Sharm airport workers were arrested for allegedly helping terrorists bring a bomb on board the Metrojet flight, but Sharm airport officials later denied that workers had been arrested.

The government said it will hire a security and risk assessment company by the end of December to audit the aviation security systems at its airports. Included are security procedures, equipment and training, as well as providing recommendations for “additional security authority exercises in conjunction with assessments on a regular basis.” The government also said it is also cooperating with the UK, Germany and Russia to review security procedures and make recommendations.

In late November, Egyptian aviation and tourism officials met in an effort to “revitalize the movement of Egyptian tourist cities” and to “speed up communication” with countries no longer flying to Sharm or the region. The website of Thomson Airways, a UK carrier that serves Egypt, indicated that the airline will resume service to Sharm on Jan. 22.