Flight Data Recorder Evolution: Where Next? 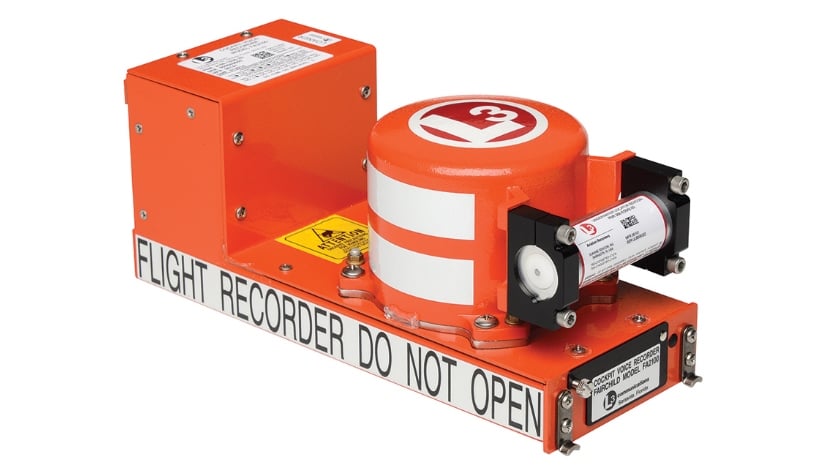 Flight data recorder technology has evolved considerably over time. It began in the 1950s and 1960s with devices that relied on metal foil and recorded just a few flight parameters.

Next came the addition of cockpit voice recording and, in time, the introduction of magnetic tape, followed by digital solid-state flight recorders in the 1980s and 1990s. As flight recorders became more sophisticated, their level of crash-survivability—and the amount of useful information that could be gleaned from the recorder once recovered—also has increased.

Some of the latest commercial aircraft, such as the Airbus A380 and Boeing 787, are capable of recording many more flight parameters than originally envisaged in the pioneering days of flight data recorder development. Much longer durations of cockpit voice recording also are being required by regulators. Today, many believe that the next step is to develop flight recorders that transmit voice and flight-parameter data in real time, while in flight, to the cloud. Flight recorders that record images of the cockpit during flight, or can be deployed automatically (via ejection before impact) from an aircraft in the event of a crash, may become commonplace.

Although the regulatory requirements for flight recorder design and manufacture are changing, they are changing slowly. The disappearance of Malaysia Airlines Flight 370 (MH370)on March 8, 2014, has influenced recent developments. Mike Bontell, director of sales and marketing for L3 Aviation Products, says that the introduction of a 90-day underwater flight recorder location beacon, with an increase in duration from 30 days, has been the most recent change to flight recorder technology in the wake of MH370.

Next step for flight data recorders:

Dominique Fouda, head of communication and quality at the European Aviation Safety Agency (EASA), explains that the change to the specification of the flight recorder underwater beacon “is meant to provide search teams with more time for locating the flight recorder after an accident over water. This requirement is applicable to all airplanes and helicopters that are fitted with a crash-protected flight recorder, including those currently in operation.”

Fouda adds that in 2012, new requirements were adopted by EASA that will phase out recording technologies now considered obsolete—such as those using magnetic tape—and extend the minimum recording duration of the cockpit voice recorder to 25 hr., instead of two. The new rules will apply to large aircraft manufactured as of January 1, 2021.

EASA also says it is updating the certification specifications for flight recorders for large aircraft and large helicopters.

“In particular, certification specifications will be defined for the installation of a deployable flight recorder, or technology where the flight recorder is automatically deployed from the aircraft upon detection of a crash, and for the installation of an alternate power source—backup power allowing continued recording by the cockpit voice recorder in case power is lost on all engines,” adds Fouda.

In March 2016, the International Civil Aviation Organization (ICAO) announced new measures aimed at preventing the loss of commercial aircraft experiencing distress in remote locations, in the wake of the loss of MH370. These measures, which will take effect between now and 2021, include the requirement for aircraft to carry tracking devices that can autonomously transmit location information at least once every minute in the event of distress.

In terms of flight recorders, ICAO also agrees with EASA that the duration of cockpit voice recording should be increased to 25 hr. to cover all phases of a flight. It also wants flight recorder information to be more readily recoverable, which could require airlines to adopt flight recorders that are deployable (i.e., capable of being ejected before impact) from the aircraft in the event of a crash.

ICAO’s new strictures support the development of the Global Aeronautical Distress and Safety System, which it proposed in 2014. The measures are intended to ensure that in the event of an accident, the location of the crash site will be pinpointed immediately to within 6 nm and that investigators will be able to access the aircraft’s flight recorder data promptly and reliably.

ICAO says it does not necessarily favor one new flight recorder technology over another. “The reason ICAO develops performance-based standards in areas such as this is specifically to permit as much innovation and solution flexibility as possible,” explains ICAO communications chief Anthony Philbin. “Consequently, we wouldn’t want to hypothetically prefer one solution over another by trying to anticipate where things may be headed—but data streaming is one option which will likely receive serious consideration.”

Bontell of L3 Technologies notes that the basic technologies needed to support real-time wireless flight-data transmission—including audio, flight parameters and data links—exist, and “may someday be part of accident investigation data collection.” There are issues that must be resolved to allow this, however, including the reliability of data transmission and bandwidth available to support the many thousands of aircraft in flight at a given time, as well as data protection and privacy—not to mention the cost to airlines of this service. “It is not likely that such data-transmission techniques will replace onboard recorders any time soon,” Bontell suggests.

He adds that, as a rule, the pace of change in the industry is relatively slow. “The current standards for crash protection, recorded data types and duration, have been stable and mature, worldwide, for many years. This includes 25-hr. flight data recording and two-hr. audio and data link recording.”

Dan Allison, a consultant at Indianapolis-based Expert Aviation Consulting, says there is a minimum number of flight parameter groups that must be recorded according to FAA regulations in the U.S., but that flight recorder technology is capable of recording many more on modern aircraft. The feasibility of streaming data back to the ground will depend on the willingness of airlines to pay for it, he adds. “A flight recorder is only of use if you can recover it, and that was a point that was illustrated very clearly by Malaysia Airlines Flight 370.

“Obviously you want real-time information coming off that aircraft. And instead of being stored in the case of a potential emergency, you would want to be observing that data, in real time, on the spot.”

This opens up the possibility of tracking any issue with an aircraft in real time and pre-empting a problem before it threatens the aircraft’s safety. “I think that the future of these flight recorders, as more complicated technology is installed, is that you will want to capture all data in real time,” says Allison.

Such a capability would include spotting potential failures of components and upcoming maintenance issues before they become problematic. This means that flight data recorders could play a risk-management role in the day-to-day operation of an aircraft and in its maintenance regime, he says, in addition to their traditional purpose. But this would impose costs on carriers, both in terms of installing the necessary equipment, paying to downlink data from it to a ground station, and for monitoring that data on the ground. “We certainly have the infrastructure to do things like that. The question is going be whether U.S. carriers want to pay for that service.

“But you could fix problems before they become problems. It would really enhance the level of redundancy of the safety of the aircraft,” says Allison.

As well as cost, concerns over the security of data will play a part in the development of these future flight recorder systems. Bontell notes that there has been longstanding interest in adding image-recording requirements to flight data recorders for large civil aircraft. “There are currently few technology limitations to extending crash-protected recorder capabilities. However, the age-old concerns related to crew privacy and data protection and distribution are still high priorities within the industry,” he explains.

L3 Technologies, a company that supplies communications, intelligence, surveillance and avionics products for civil and defense markets, is a good example of how flight recorder technology has developed over the past 60 years. L3’s current crash-protected recorders are designed and manufactured at its facility in Sarasota, Florida, and have evolved from a series of recorders developed by Fairchild Aviation Recorders. In 1958, this series began with a metal foil flight data recorder, followed eight years later in 1966 by a flight data recorder featuring a 30-min. cockpit voice recorder and 25-hr. flight data recorder.

Mike Bontell, director of sales and marketing for L3 Aviation Products, explains that these technology changes “have allowed significant improvements to the crash-survivability of the recorders. “Modern crash-protected recorders are now based on high-density, nonvolatile, solid-state memory devices. This enables extended recording durations for a variety of input types including audio, flight data, data link and image data,” he says.