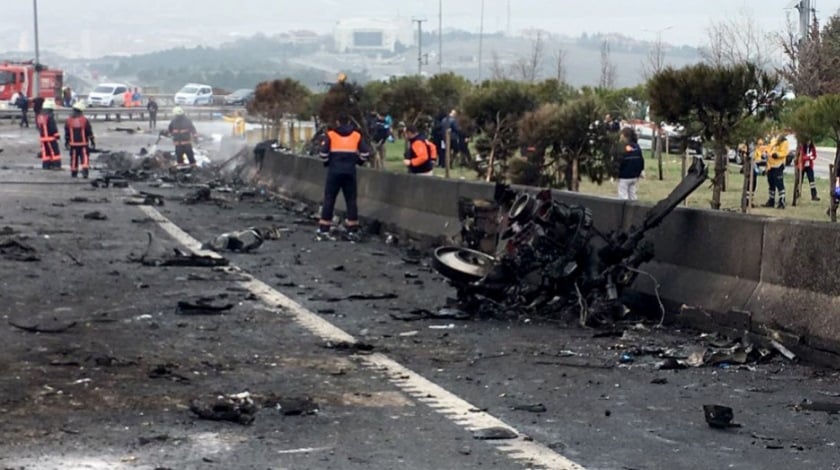 A helicopter carrying an executive of the Turkish Eczabicasi group and four Russians, including the firm’s Russian operations chief, crashed in Istanbul on Friday, killing five of the seven people on board, the company’s chairman said.

The Sikorsky S-76, belonging to the Eczacibasi group of companies, was carrying seven people — the company’s four Russian guests, a Turkish official and two pilots.

Gov. Vasip Sahin said that the helicopter crashed in Istanbul’s Buyukcekmece district after taking off from Ataturk Airport, adding that the cause of the crash was under investigation. There was no immediate information on the fate of the two others reported to be on board.

Video from a security camera of a gas station showed the helicopter plunging behind a hill, followed by a ball of fire rising to the sky that quickly turns into black smoke.

Video from a helicopter showed rows of rescue vehicles at the crash site and traffic piling up as vehicles were diverted off the highway to other roads.

The DHA news agency said the helicopter’s rotor blade hit a vehicle, smashing its windscreen and causing its roof to sink in. Its driver escaped unhurt but in shock, the agency said.

Witness Fikret Karatekin, a taxi driver, told CNN-Turk television by telephone that the helicopter slammed into the tower before crashing on the highway.

“It hit the tower and crashed by spinning,” he said. Authorities, however, didn’t rule out a technical fault as the cause of the crash.

The tower, which is no longer used for transmitting television signals but has a restaurant at the top, didn’t appear to be damaged.

Bulent Eczacibasi, chairman of the company with interests in pharmaceuticals and home products, told reporters near the scene that the Russians on board the helicopter were clients who had been invited to visit a ceramics produce fair. They were being transported to visit the company’s factory near the town of Bozuyuk, some 200 kilometers (120 miles) south of Istanbul.

However, he did not specify who among the five passengers and two crew had been killed; nor did officials give any details of the two who survived.